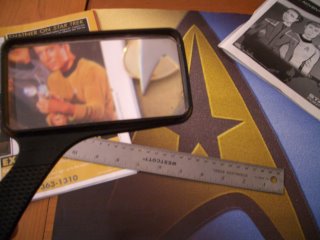 It has been 10 days since Paramount announced the first teaser poster for Star Trek XI. This was big news and has been picked up all over the world in both the geekerazzi and the mainstream media, even Christianity Today. Most of the news analysis came to the same conclusion as the Trek Movie Report, that the poster is an indication the new film will be ‘old school Trek’ from the TOS era. Now Playing Magazine puts it succinctly: “The Trek poster would seem to indicate that the new film will return to the era of the original Kirk and Spock adventures” obviously picking up on the two major clues, the insignia (only used on the Original Series) and the colors (matching Kirk and Spock’s uniforms). But of course being about Star Trek…the speculation doesn’t end there. 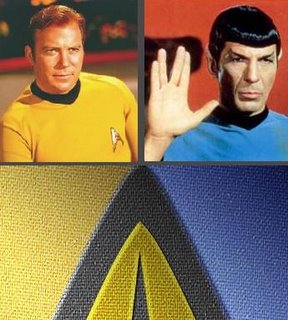 Speculating boldly
Trek fans are of course known for their keen eye in spotting the most minute things in their favorite franchise, so it is no surprise that the Trek XI Poster has sparked heated discussions all over the internet; such as those on IMDB, StarTrek.com, TrekBBS, TrekWeb and elsewhere. There is universal agreement that the poster has essentially confirmed the rumors about a TOS era film with Kirk and Spock. In addition many (like TrekWeb’s CapricornTwo) have noted the use the specific insignia of the USS Enterprise (during the Original show each Starship had its own insignia, in later shows and the movies a single insignia was worn by all…although the insignia changed over time). This leads to speculating that the poster indicates that the good ol NNC-1701 will be the setting for the movie, perhaps showing the launching of Captain Kirk’s 5 year mission. On the other hand, CHain at ST.com suggested that the old style logo confirmed rumors that the setting would be at Starfleet Academy with a younger ‘Cadet Kirk’. Others seem to buy into the Enterprise being the setting but suggest it may be one of Kirk’s predesessors in the big chair (Captain Pike or possible even Captain April). Even more speculative is the notion (profferred by TrekBBS’s Iceburgeruk) that the colors not only reveal Spock being in the film, but the percentage of blue being larger than that of gold implied that Dr. McCoy (who also wore blue) would be in the film. And then there is TrekToday’s Reviewer and Writer Michelle Erica Green who has our favorite bit of (tongue in cheek) speculation: The blue comes down beneath the insignia at sort of an angle, kind of like a slash. So I think the new movie will be the Kirk/Spock love story we’ve all been waiting for”, referring to the king of all ‘slash’ fanfiction .

Imitation is the sincerest form of flatery
Not only are Trekkies excellent nitpickers, they can be quite imaginative and creative…just look at the entries from this month’s Trek Art Contest at the TrekBBS. So when some fans saw the new poster their first reaction was to fire up Photoshop and get cracking.

ST.com member Adam Murguia seems to think he can do a better job than Paramount…you be the judge:

[NEW]TrekBBSer dukesman picks up on the Matt Damon rumor and runs with it: 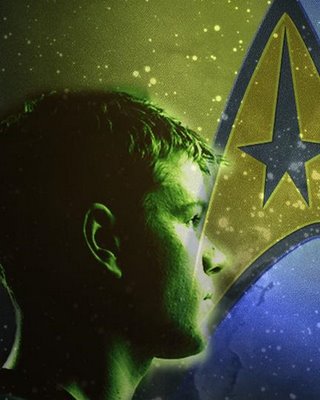 Tony (aka NextWave) has sent the Trek Report his alternative version of the poster using the insignia from one of the alternate reality/future episodes.

Another artist inspired to create alternatives based on other Trek shows and possible futures took it a step further. Somoene calling himself ‘ParamountSpy’ on TrekBBS tried to suggest Paramount was planning a series of teasers using various insignia, claiming to be ‘leaking’ insider info and artwork. Eventually he admitted they were fakes, but that hasn’t stopped many fans from using the designs as their avatars

And Evil Kirkneivel at TrekBBS has tried put together all known facts to come up with a different take altogether .

One thing is for sure, people are talking about the new movie. A Trek insider tells the Trek XI Report that all the theories and imitations and discussions are quite welcome, saying “we invite the speculation, the more the better”. Well it is clear that Paramount got what they wanted…the buzz machine on Star Trek XI is in full swing. We can’t wait to see what is next.If there is anything we missed…let us know by making a comment or sending us a tipwith thanks to the people and sites noted above as well as Memory Alpha and Spike’s Trek Page for research on Trek lore.