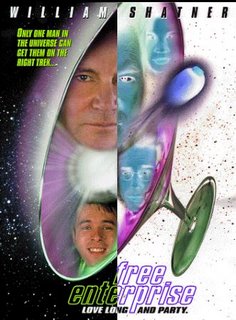 Mark A. Altman and Robert Meyer Burnett (the team behind the 1998 cult hit Free Enterprise) may be friends but they don’t see eye to eye on Star Trek XI. Their semi-autobiographical indie film about two struggling filmmakers who meet their childhood hero William Shatner (who plays himself) demonstrates that these two take their Star Trek very seriously. In the latest issue of CFQ (of which Altman is a co-Publisher) the pair square off…

In a world overcome by cynicism, greed and pessimism; the timing seems better than ever to restore the luster of a franchise which celebrated optimism and heroism above all else. …Not unlike Ron Moore and Galactica, J.J. Abrams has the opportunity to jettison the shackles of the sci-fi stigma and musty cobwebs around the aged franchise and make Star Trek relevant again.

Altman argues that a key element of this success are the iconic characters and their chemistry, especially classic ‘troika’ of Kirk, Spock and McCoy. He says that the only way to recapture that now is to recast, paraphrasing Kirk “galloping the cosmos is a game for the young”

Burnett takes the ‘KHAN‘ view, arguing that since it’s inception, Star Trek has always been best about the new frontiers…

At its best, Star Trek takes us places we’ve never been, introduces us to concepts we’ve never grappled with and shows us how to head straight into the unknown, all the while retaining the importance of our humanity….As a franchise, Star Trek always worked best while looking forward. In order to survive and succeed again, the Trek franchise must once again do what it’s always done best, boldly go where it’s never gone before.

Burnett also seems convinced that it will be impossible to recast the roles of Kirk and Spock, questioning if any actor would even try. He also argues that recasting Kirk is not the same as the (successful) recasting of Obi Wan Kenobi since Kirk was seen through an entire arc from ‘the youngest captain in the fleet’ to his death in Star Trek Generations. 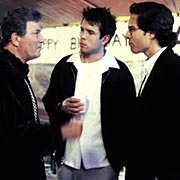 One thing both film makers seem to agree on is that the franchise is in good hands with JJ Abrams. Burnett says ‘it makes good sense’ to bring in Abrams, comparing the infusion of new blood to the arrival of Nick Meyer (director of the 1982 fan favorite Star Trek II: The Wrath of Khan) . Altman agrees, calling Abrams work on Lost and Alias ‘brilliant’. He goes so far as to say that he can’t imagine anyone better than Abrams to do justice to the original series.

The Great Trek Debate
The debate between these friends and partners mirrors that of many in Trek fandom. Although almost all agree Abrams is the right man for the job, many lifelong fans struggle with the notion of a prequel and recasting, while others relish in it. The Trek Movie Report has offered it’s own opinions on that in a recent editorial. G4 TV (which reruns classic Star Trek and Star Trek: The Next Generation) held a debate for and against recasting Kirk on Attack of the Show. Robert Burnett himself appeard on the show to take the ‘anti-recast’ point of view against James Cawley (of fan film New Voyages) and Rod Roddenberry (son of Gene Roddenberry) . Mark Altman didn’t participate in that debate, however this week he appeared on G4 to defended Star Trek and JJ Abrams in the ultimate geek debate: ‘Star Wars v Star Trek’. [enter ‘the loop’ in the video search, and scroll to see the two different debates]

For now there is no definitive answer to these issues and there wont be until JJ Abrams makes his argument on the big screen in 2008.

The ‘5 Year Mission Extended Edition‘ of Free Enterprise is available on DVDThe latest issue of CFQ is on newstands now.