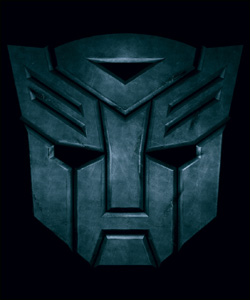 As reported yesterday, Star Trek XI Writers Bob Orci and Alex Kurtzman held a live chat about their next film The Transformers Movie. Unfortunately they did not take any questions regarding STXI. However they did reveal quite a bit about their writing process. Although Transfomers is based on a cartoon, they said they wanted the film to be ‘realistic’ and wanted it be accessible to fans and non-fans alike. Orci said: “we want everyone to be able to enjoy this film, young, old, girls, whoever”. It is likely that a similiar approach will be taken with Star Trek XI to expand it’s audience beyond the ‘Trekkie base’. One thing that was quite clear is that is these two are hardcore fans of the Transformers franchise and have loved it since they were kids. The pair discussed how they had originally pitched the idea to director Michael Bay (who they worked with on last year’s The Island). If these guys approach Trek with the respect and passion that they demonstrate with Transformers, then Trek XI is in good hands.

Looking to Fans To Help Write The Movie
Orci and Kurtzman say that they keep a very close eye on the Transformers forums to guage reaction from the fanbase. Kurtzman says: “when we get stuck we go check the boards to find out what the fans want to see. They are now taking this approach to the extreme. They announced an upcoming contest called ‘Write a line for Optimus Prime’, where fans can submit ideas for a line to be said by the ‘leading man’ of Transformers Optimus Prime. The winner’s line will end up in the movie. Could a ‘Talk for Spock’ contest be in our future? It will be interesting to see if the writers take such an active approach to the Trek fanboards which are notoriously prickly, especially the one at StarTrek.com

Making changes, but character comes first
One question caught my attention as something that may be a preview of things to come for Trek. One fan asked why a particular character “Bumblebee” had his car changed from a VW Bug to a Camero. The writers reply was “even in a different skin he is the same character that you know”. They went on to elaborate that when it came to designing the character it just seemed to work better by changing the ‘skin’, but that fans will recognize the character through his core attributes, such as being the underdog. Although I had actually no idea what they were talking about, I could imagine similar questions coming up about various cosmetic changes made within the Trek universe.

See the Video of Orci and Kurtzman at Yahoo Movies

Behind the Scenes on the Transformers set at Google Video

Interesting. Was a trekkie way back in the 70’s and 80’s and noticed today that the one creature I’ve never seen is the one that has whiskers like cats and dogs do. That is, if you aren’t looking at the ones right there on the front of their faces, they got em all over the place, on their feet, near their necks… We’ve had lots of creatures that looked like cats. But how many mammals have long stout hairs like “whiskers” hanging out of them. Would make for the one creature I’ve never seen yet. Look at a cat or dog in the sun shine and those things hang way out there from off their bodies. Anyway, I now see that I can send a note to Queen Elizabeth II of England easier than I can find a way to just send in this suggestion to JJ Abrams, Bon Orci, and/or Alex. Don’t know of any other writers for Star Treks as yet to be made. Just thought they’d like a few creatures that surely could’ve evolved on another planet, that no ones done before. It would be interesting how humans etc would interact with someone with a couple simple stout hairs hanging off of them three feet long like cats really do have (by comparision), all over the place. If they skipped the classic ones off the nose, and just went straight for all the others, off the ankles and wrists/necks it would be the “different” look and interactions we’ve not yet seen. Anyway, just a thought.