Looks like we can add another pretty face to the cast of the new Star Trek movie. In an interview (and photo shoot) with Maxim, 25 year-old actress and former Guess girl model Diora Baird talks about her role an a ‘green girl’ (Orion) in JJ Abrams new movie.

According to Baird she plays the ‘green girl’ in the new Star Trek movie, but she doesn’t seem exactly clear on what that means.

Maxim: So you’re an alien?

Baird: Um, I would assume so—unless I was born with a skin disease. In the original series, there were these infamous green women that Captain Kirk would hit on, and so without giving too much away, I’m one of those green girls.

So she may not be ready for a Trek trivia contest, but Baird has a couple dozen film and TV credits already, including Wedding Crashers, Texas Chainsaw Massacre: The Beginning and guest spots on Shark and The Loop. And it appears she has what it takes to play an alluring Orion. Baird can be seen now in the Dane Cook comedy My Best Friend’s Girl, which opened this weekend.

More from Baird, including photos at Maxim. 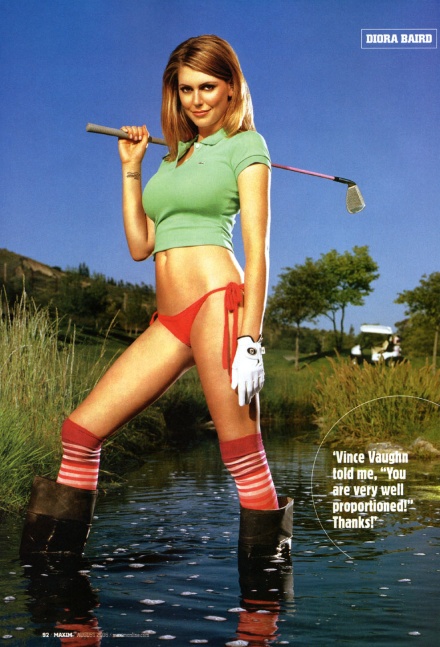 I was just thinking the same thing.
So, this is, what, at least two Orion women?

When are they going to have some women with meat on their bones? I’m not trying to be disrespectful, but there are many women with some ‘substance’ that would make an excellent Orion woman, com officer, etc. Guess I don’t live in the real world, though :-\

Oh, the Orions are just going to be window dressing anyway.
How much are they really going to have to do with the story?
My guess is, not much.
They won’t be catalysts for the plot like they were in ENT: ‘Bound’.

I know I’m a geek for saying this, but I’d rather see the new bridge, or the Enterprise… chicks like this are a dime a dozen

This is only interesting for guys married to their hands…

Diora Baird’s an up-and-comer, so I wouldn’t be surprised if she gets at least a couple of lines. Good work, J.J.

The episodes with T’Pol half naked and the Orions in Enterprise were always disappointing to me. The only real relationship I had with my dad growing up was our common interest in Star Trek (Original Series) and unfortunately, with the some of the overly sexualized episodes of Enterprise, I had to be careful what I let my kids see and not see.

My best memories were going to see the Star Trek movies with my parents. I remember being 6 or 7 and seeing The Search for Spock and so on. I was hoping to have a similar memory built with my oldest daughter who’ll be 9 next year. If as is typical, the movie versions are even more sexualized (and I hope there is no nudity) then the Enterprise versions, then there is no way I can take my kids or build this memory with them.

It’s obviously way too late now for JJ Abrams to change anything now. He’s got his vision and passion for what he wants to show but I sure could have wished he took this into consideration.

You guys amaze me. No matter what new news comes out about the movie, you are STILL not satisfied. “give me the E” “Give me the trailer” Is that all you guys know how to say? Jeez… give it a rest.

Anthony.. I am so happy you delete the “First” comments.. can you do the same for the “Give us a trailer” comments too? It really is getting annoying. There in not one thread that doesn’t have at least 15 comments that say “give me a trailer”.

you’ll get a trailer when they are ready. the movie isn’t til may. give it rest already.

Oh man, I forgot all about That, what are you all Spazin’ about Now?
What, too hot For Trek?? Oh No!!

Um, not to also mention: SHE WAS A PLAYMATE! Anyways She’ll do fine as an Orion Woman, MORE than fine. But yeah, WHEN will whe get to see the Enterprise or Bridge?

In the 90s & early 2000s I always complained about the women characters in catsuits, never stopping to remember Gene Roddenberry’s penchant for nearly-naked women in TOS.
It was only in the earliest movies that Trek moved away from the scantily clad women. But then, the principals were all getting older and Uhura’s fan dance in Trek V was about 15 years too late to be very arousing, alas.

……………….I should have listened more carefully!

Is she related to Stuart Baird by any chance?

I’d hit *that* with an inverse tachyon beam.

She’ll make the perfect orion slave girl. That could also be the nerdiest pick up line ever.

So my unneeded comment of the day is “she’s hot!”
(Not very interesting either, I know)

Anthony, I would understand why you would delete some of our posts on here, but you gotta admit, SHES HOT! Im betting this will have fans come and see the movie just for her, and it will hopefully boost ratings for the movie. Anyways… enough rambling. Im tired and im gonna dream about her tonight. :))

So, in the 23rd century, busty is in?
I think I’m gonna like this century.

To my surprise actually, my first response at these news were… “YEAH!!”.

to quote a great captain
“oh my!”

#5 “When are they going to have some women with meat on their bones?”

Agreed. If orion slaves are meant to please their masters with erotic/exotic dances, we know that in our real world those things work better with curves. I’ve never seen a skinny belly dancer.

Ok. admit she is hot and sexy. can’t wait to see her as an orion. Should be good.

She has lots of meat where it counts.

Wouldn’t mind discussing the Big Bang theory with her..! And she’s got a fantastic set of tachyons. I bet she’d be impressed with a 10 inch refractor though.

Anyone seen her “other” pictures :P

Not yet! I’m really tee-ed off cos I’m at work.

JJ knows his stuff, all right! Gorgeous women are vital to anything properly based on Star Trek (TOS)!

weee, hope the movie doesn’t get over-sexed (:
I mean: Zoë Saldana might be the hottest choice for young Uhura possible. We have sexy mini-skirts (which of course mainly add some 60’s-touch). We have Rachel Nichols AND now theres Ms Baird… well, at least there won’t be any female Borg drones

Well, it should boost ticket sales to the college frat boy demographic…

“So she may not be ready for a Trek trivia contest, but perhaps she’d make a good Vice Presidential candidate.”

#26 She seems to know as much about Trek as Stuart Baird so yeah they might be related!

I just hope there also will appear some women who are not just toys for the males.

in alias and Lost JJ always created emancipated, strong women, I hope we will have some of those in STXI, too.

I am really sick of those girls who never have seen any actor school, but appear in all the movies just because they look so hot.

umm…..close enough. Let’s see what you look like in the movie baby?

me (47) I think there’ll be plenty of strong female roles in this film. After all, it’s a JJ Abrams film. But sex was always a very important part of Star Trek (TOS) and this film is clearly reflecting that. After seeing Diora Baird in those clothes, I’s almost be tempted to take up golf!