We are now just weeks away from the release of the first issue of "Star Trek Countdown," the official prequel comics for the upcoming Star Trek movie. Recently we showed you the covers for the first two issues and today artist David Messina posted the artwork for the final two issues. We also have an update on a comic all about tribbles!

As noted in the previous update, the four issue ‘Star Trek Countdown’ comics series will show the progression from the Next Generation era after Star Trek Nemesis to the new Star Trek movie. The series is ‘presented’ by Star Trek director JJ Abrams with a story by Star Trek co-writers Roberto Orci and Alex Kurtzman. The series will primarily deal with (elder) Spock and the film’s villain Nero, including interactions with other characters from the TNG era.

Artist David Messina has posted the artwork for the covers of issues 3 and 4 on his blog Spider Behind the Mirror. The final two covers feature Jean Luc Picard and the elder Spock respectively. There is also the ‘final’ version with the type treatment available at tfaw.com. Pre-order Star Trek Countdown now
Issues 1-3 are available now for pre-order at tfaw.com and the Trade Paperback is available at Amazon.

ALIEN SPOTLIGHT TRIBBLES COMIC UPDATE
Later in 2009 IDW will be publishing its second ‘Alien Spotlight’ series, with one issue that focuses on those furry menaces…Tribbles. How do you do a comic all about furballs?  Writer Stuart Moore says he has nicknamed the comic "The Trouble With Humanoids" and explains his approach to the book on his blog:

Tribbles are hard to spotlight because they don’t do much except trill, breed, purr, and die just in time to fall all over Captain Kirk. But they mean well, and as soon as I came up with the idea of a whole planet full of the things, the story clicked into place.

… It was a tricky script to write because there are basically three groups of characters, all with their own character arcs, packed into 22 pages. There’s a human freighter crew that really doesn’t look for trouble the way Starfleet does; a Klingon crew that’s a bit more rundown than the unstoppable Imperial fighting forces we’re used to seeing; and, of course, the tribbles — billions of them.

And artist Mike Hawthorne has revealed two pages from Alien Spotlight II – Tribbles on his blog: 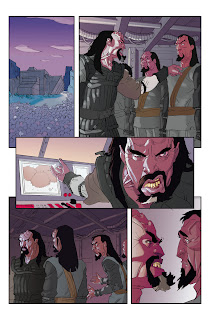 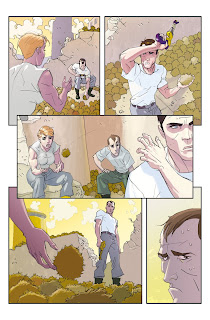 Alien Spotlight II kicks off with the Tribbles issue in March. The series will have a total of six issues, each covering a different alien species. A Klingon issue being written by Keith R.A. DeCandido is likely to arrive in April. The other four issues have not been officially announced, but TrekMovie will have more details in our IDW comics 2009 preview coming up soon.

I Look forward to these books.

Anthony, or anyone on the Trek Movie staff (or perhaps Bob?),

What is the story on the Countdown comics for those of us who are spoiler-phobic? Is there a recommendation out there on whether we should read them or not? Or any indication of how detailed they get on Nero, Spock, et al.

I am planning to get them for sure, but would be bummed if they gave away too much (but I guess since … SPOILER ALERT … we all kind of know about the time travel element and a few other items, I don’t want too much to be given away).

Just curious. Not an easy answer, obviously, since everyone has a different take on what constitutes spoilers.

Yeah, they look pretty cool but I wish they could’ve just made a short tv series or something official! Next Gen era is pretty cool after all and there’s somply nothing cooler than seeing different Trek series’ come together… PARTICULARLY if it involves a passing of the torch.

Does anyone remember the passing from the original to Next Gen? End of Movie VI and also in Generations? Well, it looks like history is about to repeat itself — Next Gen is passing the motherfucker back. WHY DIDN’T THEY MAKE A SHOW DAMNIT!!!

Mr. Orci,
Did you consider using these books and actually make 2 or possibly 3 movies as a story arc to bring the franchise to where it will be after this movie?

Must have forgot his prune juice…

Picard looks like a clown. Eyebrows are way way too dark…lol!

When I clicked on the Tribble comic panels it took me to a site to buy stuff, but showed the diamond select sulu/gorn for abpout 125.00. Tell me that’s for a case and not just the 2 figures.

Countdown’s supposed to be a non-spoiling prelude to the movie, all set in the TNG era(s). I would suspect that Bob & Alex set it up so that it wouldn’t spoil the movie in any way, other than letting you know what we already know, that Nero is a Romulan bad guy.

OMG!! Picard has three pips on his shoulder! Demoted!!

I took a look at the art for the tribbles comic…tribbles shouldn’t just be everywhere, unless that’s not their home planet. Even if it’s another planet, what are they eating so that they cover the place?!

The original episode is an environmental cautionary tale (Trek was ahead of its time again) and Spock mentions that tribbles breed so fast because of all the predators on their planet. Their home planet would be a nasty place! Constant threat from medium-sized predators the equivalent of hawks, eagles, coyotes, wolves, mountain lions…anything that would find small furry creatures tasty.

11.:
The fourth pip’s obscured by the delta overlay on the cover.

Isn’t that what Ben Zoma always said behind his back?

I am 100 percent on the fact that B4 is now Data and it ties up the ending to Nemisis that we never got. Remember when Data put all of his life inside B4 ala Spock McCoy.

When did Star Trek become about grumpy old men? :)

The crawdaddy story is amazing, especially the Koenig part on page 47…

I think it’s nice the prequel comics are starting off with the grumpy old men and leading to a new movie full of young folks.

When did Star Trek become about grumpy old men? :)

Seriously- that’s been the story since 1982…

I don’t think they give anything too terrible away. It doesn’t give anything away about what happens in the movie, but it does give you the context between Nero and Spock, which I suppose is a spoiler for sure.

5. Richard Daystrom – January 2, 2009
Mr. Orci,
Did you consider using these books and actually make 2 or possibly 3 movies as a story arc to bring the franchise to where it will be after this movie?

It’s crossed our minds, but we like to focus on one movie at a time and not let our arrogance assume more than that.

hmm… so we will learn why Spock travels back in time!

I’m wondering if the comic is the “bridge’ which will serve to really embellish the story for HARDCORE canon type fans instead of more of a tie in. I’m torn on whether I want to take away from the visceral experience of seeing it the first time without the forknowledge of what’s in the book.

I love this, Bob, it’s like playing Battleship with pencil and paper…

I do believe the comics will reveal Spock’s real first name, which is of course, ‘Timmy’

Thanks, Bob. Much appreciated.

#25—-Is the “context between Nero and Spock” explored in the film as well, or just within the comic series?

Love child! Never meant to be!

#27—I thought Spock was his first name, and his last name was Jenkins…You know, one of them Jenkins boys from Vulcan!

Nero is the son of Saavik

I thought Spock was a baby doctor from Canada.

Anyway, wanted to also thank you, Bob, for validating the comic book medium as both a Star Trek and comic book nutjob myself. You and Alex and J.J. and that Lindeloff character have my utmost respect and faith in any directions you take me into. It’s cuz I know your collective works. And I like ’em.

…Not only is it a compelling idea but it’s one I wouldn’t put past Abrams or Lindeloff. Remember on Lost when we had that rug-out-from-under-us moment when it was revealed that Locke’s father was the one responsible for Sawyer’s parents’ deaths? I love connections…

Thanks, I needed to clean my monitor. Coffee is not generally considered to be the best cleaning agent but hey it worked.

I just look forward to Kirk and Crew encountering a partially submerged Statue of Liberty, on the shore of a beach. Don’t let us down, Roberto O.!!!

36. Red Shirt –
“I just look forward to Kirk and Crew encountering a partially submerged Statue of Liberty, on the shore of a beach. Don’t let us down, Roberto O.!!!”

I agree! That was one of my favorite episodes! Then Kirk got to make sweet, sweet monkey love to Dr. Zira!

Haha, I had a great moment at work today: I was straightening up a shelf, just minding my own business, when I suddenly remembered that hey! it’s January ’09! That Star Trek ’09 comic book that seemed so far-off into the future when it was announced and thus ended up pushed to the back of my mind, is coming out this month! How cool!’

I’ve actually never read a Trek comic book before, or, well, any comic book at all. Not that I haven’t considered it, but I went into Books-A-Million to see what they had, and twenty bucks for a little book like that (even a really nifty looking one like that ‘Best of Peter David*) just doesn’t seem worth it to me, much as I’d like to read and own them. :( But twelve dollars overall, for the four small comics somehow seems a little more palatable. lol. So I’m pretty darn excited to get hold of these!

* Or whatever it was called. I don’t really remember if that was the right person, but the comics I glanced over were really cool. Very vibrant and punchy.

totally, and don’t forget Adam and Eve in the cave with that black and white stone ;)

it is a two-parter, with Kirk and Spock disabling the Genesis device in the subway tunnels of old Manhattan, dropping mutants left and right and saving the ape girl scientist in one stride!

It could be done BSG style, with some kind of webisodes movies… But probably Mr Orci is right, and it is better to focus on one movie.

Besides, i don’t think Patrick Stewart nor Brent Spiner will go for less than a real movie…

mr orci,
have you seen the watchmen motion comics? they are amazing!
is theyre any chance of paramount making some star trek motion comics?

mr orci,
have you seen the watchmen motion comics yet? (theyre amazinglly well done!) Is there any chance of paramount making some star trek motion comics because i think theyre a format that trek would fit nicely into!

The tribbles comic looks funny and cool, I think I’m gonna buy that, looks very interesting might show how Klingon fleets were sent to destroy the innocent Tribble homeworld as per Worf’s words!

#37… “I agree! That was one of my favorite episodes! Then Kirk got to make sweet, sweet monkey love to Dr. Zira!”

Oh, the very thought makes me all hot and bothered. I loved Dr. Zira. She was beautiful!