Happy Friday the 13th, everybody! While you’re avoiding black cats and walking under ladders, why don’t you read up on the newest in science news? This week, learn what happens when spacecraft collide, magnetars make astro-fireworks, doctors make like McCoy, and 40,000 year old bones come to life. All this and more plus our gadget of the week: The Ponginator.

Debris Spews Into Space After Satellites Collide
Russian and US satellites were destroyed Tuesday in the first ever satellite collision, and their massive debris clouds may threaten other spacecraft in lower orbit. The smashup occurred over Siberia when a derelict Russian military communications satellite — said to be "out of control" — crossed paths with a U.S. Iridium satellite. NASA said it will take weeks to determine the full magnitude of the crash, which occurred nearly 500 miles (800 kilometers) over Siberia. There have been four other cases in which space objects have collided accidentally in orbit, NASA said. But those were considered minor and involved parts of spent rockets or small satellites.

Magnetar Creates Intergalactic Fireworks Show
This week, NASA’s Swift Satellite observed frequent blasts from a stellar remnant 30,000 light-years away. This remnant is known as a magnetar – a neutron star with an unusually powerful magnetic field. Such objects unpredictably send out a series of X-ray and gamma-ray flares. In addition to the tremendous amounts of energy this thing is putting out, it creates a lovely sky show for astronomers who know what to look for. Known as “light echoes”, the intergalactic fireworks are created by X-rays emitted by the magnetar which bounce off of clouds on their way to Earth. While this obfuscates the ability to accurately measure a distance to SGR J1550-5418 (as it is formally known), it does allow for the creation of some very cool movies and images. “Star Trek” Healing Laser Better Than Stitches
“It’s science fiction made real,” a doctor from Tel Aviv University told Reuters, as he demonstrated how a new laser the university has developed is better than stitching up a patient. The laser allows a wound to be welded shut as opposed to sutured, which makes it far more watertight and there’s less tearing. It’s done by very carefully controlling the temperature of the beam, and Israeli patients treated with the laser have already enjoyed faster healing times and less scarring.

Scientists Create Genetic Blueprint of Neanderthal
An international team Thursday said it has completed a draft of the genome (or genetic blueprint) of Neanderthals, which shows that our extinct cousins made “very little, if any” contribution to human genes. This genome was stitched together from fossil DNA samples taken from four Neanderthals found in Europe. Neanderthals occupied Europe from about 800,000 to 30,000 years ago. Scholars have long argued over their extinction, and their relationship to people. “I think it is spectacular, to get something out of bones 40,000 years old; absolutely stunning,” says one anthropological geneticist. 13 Facts About Friday the 13th
Today is Friday the 13th — the day rumored as the unluckiest of the year. To commemorate the event, we’ve gathered 13 facts about this very day. Just make sure to knock on wood after reading them. Oh, and don’t walk under any ladders or break any mirrors.

Happy (early) Valentines Day, from XKCD
XKCD wants to wish you and yours a very happy V-Day with this Sierpinski Valentine. 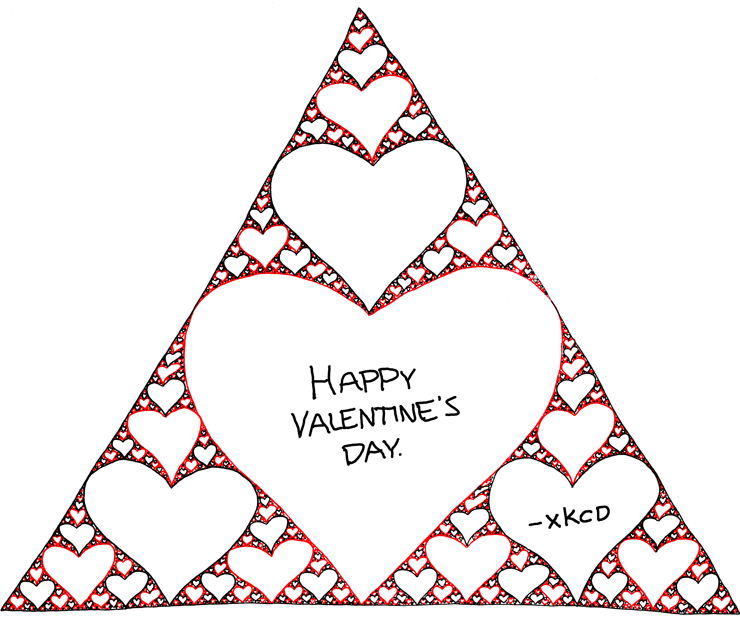 Gadget of the Week: 3-Story-Tall Ponginator Shoots Ping Pong Balls That Can Kill a Man
For some reason, some engineering types in Texas decided to build a gigantic monstrosity of a robot that can shoot Ping Pong balls at 170 mph, fast enough to kill. All I’m wondering is, um… why? Oh, and if you listen closely to the below video, you might here a certain familiar binging sound. Yep, that’s definitely the TOS bridge chirp.

Fascinating about the laser!!

Colliding satellites falling to earth?? Isn’t that how Sean of the Dead started????

(Fear of Friday the 13th — one of the most popular myths in science — is called paraskavedekatriaphobia as well as friggatriskaidekaphobia. Triskaidekaphobia is fear of the number 13.) Ok. I can not even pronounce theses words. But I guess it’s an Unlucky day. though Some of my best days have been on the 13th on a riday. But the day im Realy! looking forward to is Friday May the 8th 2009. Star Trek Day. You know. that day should be a World Holliday.

denevan parasite in the mr. bond video
there’s not only the bridge sound, but also a replicator and a sentence from Portal.

Also, the order to arrest members of the Knights Templar was given and executed on Friday the 13th by King Philip the IV. They were charged with heresies and tortured.

Texas has to have ping pong balls that kills. Goes with the guns they carry to work and the 3 Liter bottles of Coke (Only a sissie would drink from 2 liters!!!). And after you’ve tipped your 40th cow and blown away a white tail with a bazooka, what is mans next worthy challenge?

Here is evidence for 11)s statement on the HMS Friday
http://news.bbc.co.uk/2/hi/uk_news/england/hampshire/6896203.stm

The Ponginator! A worthy addition to man’s greatest engineering feats! Quit pussy-footing around with laser band-aids and glorified telescope and build something that can kill a man with a ping-pong ball! I want one.

You don’t know how bored those engineering types get during those loooooong gaps between classes, sounds like something my classmates and I would have designed.

Where was that laser suture when I got staples in my head?

Anthony Pascale’s Valentine™ determines the coefficients which arise in binomial expansions. The pattern obtained by coloring only the odd numbers in Pascale’s Valentine™ closely resembles the fractal called Sierpinski Valentine©, and this resemblance becomes more and more accurate as more rows are considered; in the limit, as the number of rows approaches infinity, the resulting pattern is the Sierpinski Valentine©, assuming a fixed perimeter.

Notice the coefficients are the numbers in row two of Pascale’s Valentine™:
1, 2, 1. In general, when a binomial like x + y is raised to a positive integer power we have:

The interpretation of the number in Pascale’s Valentine™ as the number of paths to that number from the tip means that on a Plinko® game board shaped like a triangle, the probability of winning prizes nearer the center will be higher than winning prizes on the edges.

*writes on death certificate under cause of death*,,,
ping ponged !!!

what is wrong with the site today, AP?

I have never hunted deer or tipped a cow (seriously, who does that?), but as a former Marine Officer, I suppose I have carried a firearm to work.

Stereotypes are hilarious…and usually way off.

The handguns to work thing is real. I’ve worked in Austin a good amount in the past few years. Some places there are signs specifically prohibiting, but most places it’s actually okay and I have a fair number of friends who keep their guns on them when they can (in their cars when prohibited).

Don’t get me wrong– love Texas, especially Dallas and Austin– Houston not so much. Beautiful place. There’s something in the water (I think it’s RBST)… Just like to make fun of Engineers from Texas whenever I get the chance…

Several years ago I lived on the 13th apartment floor and my door number was 1307. :)

“For some reason, some engineering types in Texas decided to build a gigantic monstrosity of a robot that can shoot Ping Pong balls at 170 mph, fast enough to kill. All I’m wondering is, um… why?”

I tend to agree. Regardless of where these folks are from, be it Texas, China or the UK, and with all the misery, financial chaos, hunger and disease out there…wouldn’t investing time in something more beneficial to mind-kind be more worthwhile? We as a people aren’t doing too hot at the moment…why waste time making something like this?

Regarding the space junk issue…this would present a fabulous opportunity for some company. I don’t know how hazardous it would be to yank this stuff out of orbit and tow it to some space junk-yard, but wow, I’m sure some government(s) would pay a handsome sum for such a service.

There are 3 Friday the 13ths this year. The next one happening next month.

The other Friday the 13th is in November — my birthday. And I was born on a Friday.

I was not driving either satellite.

That Apollo 13 movie was great…

Kayla..as always your articles were interesting..however today I found them ..especially fascinating….must be that 13th thing…
Great Stuff!!!!

For once Kayla you left me with nothing to say. }:-D>

The 13th tribe of humanity was Cylon

Anyone remember that there were 13 original colonies that formed the US of A?

There’s also an article about the HMS Friday urban legend on Wikipedia. A good example why it’s not smart to get your education from some jerk’s comedy routine.

I remember ping pong balls and foam being shot into the dismembered left wing of the Enterprise Orbiter Shuttle as the test in Texas that proved to the astonished NASA management that indeed, fast foam can puncture RCC plates on the leading edge of Shuttle wings. Without that test, some may have never actually have believed it were actually possible. Probably same team at work here.

So far as I know no one has ever tried what I just did, and that is a synchronized “side profile graph” of a Shuttle launch. It’s a ten minute you-tube clip posted last night, but I think you’ll like it. One thing that is proven by the video as you watch the in-scale graph is that the Media often completely represents the track to orbit. Even the NASA PAO in Houston gets some of his calls off – way off. Let me know what you think of the video that can be seen by clicking my name. This same Discovery Shuttle may or may not get off again next week. I’m reading Astronaut Sandy Magnus’ blog and so far she hasn’t expressed disappointment or excitement that her ride home is late.

A correction – the Media MISREPRESENTS the track to orbit. Once the Shuttle passes out of view of the news vans, they say it’s in space. But on the graph, at this point the line of the graph is nothing but a tiny sprout. Once the International Space Station enters the picture at proper speed and altitude on the graph, you can see how amazing it is that in only a few minutes, the Shuttle is able to match the speed before the engines go off. The camera was set up by me remotely as a fixed observation platform for last summer’s launch, and I don’t know the family in the background but they usually got it right more often than the NASA commentator did. It was set on the widest zoom intended to keep the Shuttle in view for as long as possible, but the downsize of it was that everything appeared twice as far away as it really was.

I agree with the other comments, this week’s Science Page was particularly awesome.

The reason there are 13 of so many things on the back of the greenback is because of the 13 original colonies of the US. C’mon people!

CASTRO WAS BORN ON FRIDAY THE 13TH!!!