Kang is back. And he’s going to show us why you should share. Of course, his idea of sharing is telling stories where a whole lot of people die pretty horrible deaths. Are those stories any good though? You will find out in our review of the brand new IDW comic, "Alien Spotlight: Klingons." We also have a preview of comics coming up in May, including some exclusive first looks at covers.

Keith R.A. DeCandido knows his Klingons. He’s written several novels on the subject, including the "IKS Gorkon" series and the "Art of the Impossible" book from the "Lost Era". Now he’s got the chance to shine the IDW Alien Spotlight on the Klingons. To make this even better, IDW has blessed him with J.K. Woodward as an artist.

DeCandido has decided to focus on the life of Kang in this issue and tells three stories in doing so. Each story is told by Kang at a different point in his life, the first in 2267 in the aftermath of the Organian incident (TOS "Day of the Dove"), the second in 2310, and the final one in 2370 right before the events of the DS9 episode "Blood Oath". He features in two of his stories before telling a story of Kahless and the origin of a Klingon proverb used in the other two tales.

Why is it that all Klingon proverbs involve death in some way? (click to enlarge)

DeCandido draws on tales from a number of eras for this issue, and does not limit himself to episodes seen on screen, but makes references to some novels published by Pocket Books, including "Forged in Fire". This ability to tie the written universe together and make it feel like one larger fabric is a huge benefit to having a novelist write comics.

J.K Woodward’s previously worked on IDW’s Star Trek line, but only doing covers and colors. Here, he gets to let loose on an entire issue, and uses three completely different art styles, one for each section. I’ve seen a lot of Woodward’s art over the course of Peter David’s Fallen Angel series, and it is a pleasure to see him get to use his talent to portray Klingons of all sizes and eras. His grasp of art technique for the comic page is fantastic and he ties in all sorts of styles in the book, the most striking being the middle story when we see John Harriman and Demora Sulu, after the events of "Generations".

The first "Alien Spotlight" series a year or so ago was a lot of fun and had some decent stories, but this one tops them all. For me, this is easily the best presented issue IDW has their Star Trek line to date, and it is on par with the "Klingons: Blood Will Tell" miniseries. Woodward’s art is a wonder to look at, and DeCandido has given him a good story to work with. IDW needs to try to get Woodward working on another issue for them, preferably with another author of DeCandido’s quality. 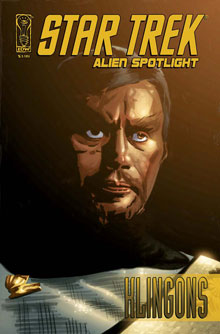 Alien Spotlight: Klingons is available in comic stores Today. You can also order it from TFAW.

STAR TREK MAY COMICS PREVIEW
IDW have a lot of Star Trek comics coming in May. There are three new issues of currently running series, plus a new omnibus. We have a full breakdown of with covers, some of which are exclusive first looks. (you can click covers to enlarge)

Crew #3 – May will see the third issue of John Byrne’s Crew is out featuring our favorite unnamed ensign (aka ‘Number One’) aboard the USS Ventura on a trip to Beta Eridani III. Mission’s End #3 – Also coming out in May is Ty Templeton’s third issue of Mission’s End, as the civil war continues. The Enterprise is damaged, and McCoy is missing, presumed dead. Alien Spotlight: Romulans – And Ian Edginton returns to Star Trek comics to write a spotlight on the Romulans. Following John Byrne’s spotlight last year, Edginton presents the story of Acastus, a heroic commander trying to parlay his military service into a political career. Early Voyages Omnibus – Fittingly, the trade paperback omnibus coming out in May (the same month as the Star Trek movie) is volume two of the series and is Ian Edginton and Dan Abnett’s "Early Voyages" series from Marvel Comics. This omnibus features all 17 issues of Christopher Pike’s adventures, complete with the cliffhanger at the end of issue 17! COMICS NEWS: IDW Named 3rd Largest Publisher
For the month of March IDW entered the ranks of Diamond’s top three publishers for the first time. IDW cite the Star Trek movie prequel "Star Trek Countdown" as one of the keys to propelling it up the charts. Other big sellers for IDW in March were G.I. Joe and Angel. In addition to reaching third, IDW is also celebrating its tenth anniversary, and boasts five Eisner nominations, another new company record. So, with a little help from Star Trek, IDW are on a roll.

I must admit, after COUNTDOWN I’m looking a comics more to help me get a TREK fix.

These comics have been a wonderful addition to the Trek ink family if not the best.

I would like to take this time to thank TREK MOVIE
for an awesome site that has fed my hunger for updates ! I have been a trek fan since day one and you have ignited a new fire of excitement for us all!

I love me some Kang! I’ll bet getting that for sure. Along with the upcoming Early Voyages of Captain Pike, man that was a great run while it lasted, particularly the first few issues. Thanks for the “heads up”!

Its only in the past year I have gotten back into reading and collecting comics. It started with the announcement of the countdown comics so I went to the comic shop to see what else star trek has been doing with regards to comics. There are some great ones but I love the ones drawn by David Messina, I love his style. I honestly stopped reading comics because I was sick of the art style and the printing quality, seeing all those dots and overlaid inks, it was terrible, now most comics are high quality printing, as well as glossy paper. So I am back into Star Trek, Batman, Spawn, and Iron Man comics. 30 days of night is also great and the walking dead by image comics is a great series. I must say though that IDW is doing a great job producing solid comics. With regards to Star Trek the Mirror Images, and Alien Spotlight series are the best. Year Four, Missions End, and Crew are also great. I never thought that out of all the new Trek comics I would love the stories about the original series era the best. Keep it up IDW, I love it.

I lost all interest in Blood Will Tell when Kor thought it was dishonerable to round up Organians for execution. Likewise with that early TNG issue that was put out with Picard saying he’d sacrfice the whole ship to save Riker. Hopefully this new klingon issue does a bit better.

Looking forward to the Early Voyages omnibus, I really enjoyed the run in the 90’s. It would be nice if they did the other marvel Trek titles like this.

I am so sick to DEATH of Klingons. I am so totally stoked that we’ll have a Romulan baddie to watch in the new movie. I wish Klingons would just disappear. Good riddance, in my opinion, if that happened.

Kang is my favorite Klingon. It was great when he came back on DS9, but my favorite was the tiny bit of him we got to see on Voyager.

Romulans are boring. I can’t believe we’re seeing more of them after “Nemesis”. Take away everything that makes Vulcans and Klingons cool, put them together and you get Romulans. What’s the point of them?

Got the DVD with the complete (almost) of Trek comics (up to 2006) collected on them last Xmas. Not like reading the paper version, and some of the scanning was sloppy, but overall A LOT of treats in this bag.

Perhaps IDW will provide for us in the future more of the same?

Just like to point out that the ship “RONEY” in the first story is named after my daughter, Ireland Ke’alaokapuanani Shirley Roney. For those of you running a little slow today, that shortens to IKS Roney.
Picked up a copy for each of us today.

#11: Well, you won’t have to worry about Romulans ever again since Romulus was blown up in Countdown!

I’m on the same boat my man. Started collecting and reading again once “countdown” got me in the stores again.
The store i go to has a box of Trek backlog stuff so I’ve been not only reading the new Trek, but some old stuff too like Early Voyages (I think my favorite. My favorite is the savage Vulcan story line that explains Spocks emotional suppression between The Cage and TOS proper), and Volume 1 and 2 of the old DC line (it’s hit and miss with those, still fun regardless) I’m fond of the DC annuals. I think its annual #5 where it turns out Rand has been working as an Intelligence agent (before DS9)
On the non Trek front: into the new Warren Ellis books, Ignition city (it just started), Doktor sleepless, and No Hero.
I’m more into Marvel where mainstream comics are concerned. If you like Sci-fi themed series the new War of Kings: ascension is very exciting, well drawn, and has a great twist ending the first issue.
My Star Trek collection out ways everything else though.
Crews, and Missions End really take me back to the days of good plentiful trek stories.

Someone mentioned other older Marvel books, has anyone read the Marvel line that came out before DC, its post ST:TMP, I want to know if it’s any good?

The Klingon spotlight looks fantastic; I’ll definitely have to check it out. For anyone who hasn’t read those issues, the Early Voyages TB is definitely worth the read, even if it does infuriatingly end on a cliffhanger!

#15: The original Marvel volume? It’s not too bad.

Thanks for the review, ,Alex! I have to admit to feeling incredibly lucky to have gotten JK to illustrate the story, as he really made me look good. *laughs*

Seriously, he did some amazing work and I couldn’t be happier with how the issue turned out.

I gotta get my butt to Legend Comics once that baby comes out.

Has IDW given any thought on completing the Early Voyages cliffhanger? I’m sure there is a market for it?