With Deep Space Nine descending into chaos, Captain Sisko turns to an unexpected source for assistance-but how can the Cardassian tailor Garak help?

It all comes together in this final issue of IDW’s debut DEEP SPACE NINE miniseries! "DS9: Fool’s Gold" #4 retails for $3.99 and arrives in comic shops Wednesday March  24th. You can pre-order it at a discount from TFAW. You can also pick up the first three issues and the next two issues as well, all at the TFAW discounts.

COMICS NEWS: Messina moving on – A wait for next Byrne comics

David Messina, the artist for the three IDW Star Trek movie tie-ins ("Countdown", "Nero" and the adaptation) announced on his blog that the adaptation will be his "farewell to Star Trek ‘s universe". Messina says he is "leaving for new projects." But before he heads off, Messina continues to show off some of his work on the adaptation. One image is below, go to davidmessinart.blogspot.com/ for more. 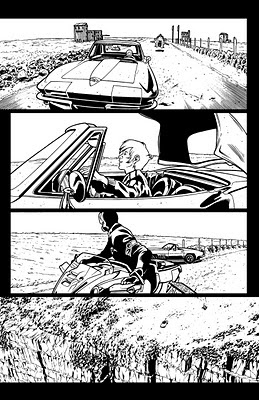 Last month we reported how John Byrne announced on his forum that he has three new TOS era comics coming after his "McCoy Frontier Doctor" series wraps up. But it looks like there may be a bit of a wait. Last week Byrne announced "none of those have been scheduled yet" and "it may be a while before IDW gets around to asking me to start any of them." Here is a preview panel from the fourth and final issue of Byrne’s "Frontier Doctor" series, which kicks off in April. That Byrne Enterprise is sweeeet! Always been a big fan. I won’t say “since the 70’s,” as that would show my age… and his. :)

Byrne is the man. Accept no substitutes!

I hope they aren’t reducing their overall slate of Trek comics. After “Ghost” and “Fool’s Gold” wrap up, all that’s left is the movie adaptation, “Captain’s Log” (which is coming out very slowly by comparison), and the upcoming TOS and Dr. McCoy series.

I think the IDW Trek book frequency will keep up. A new TOS series from the Tiptons starts in June. I suspect there will be another ST09 tie-in sometime before the year ends. And the next Byrne will likely also kick off before the end of the year. Hopefully a new TNG or DS9 series starts up too.

Byrne’s McCoy comic will be epic

What I want to see is an “Enterprise” mini-series of comics. Romulan War would make for a great story as would the Mirror Universe.

Did IDW acquire the rights for Star Trek Enterprise?

#7 IDW has the rights to do comics based on any of the series. So far they have done the new movie, TWOK,TOS,TNG and DS9. “Enterprise” is part of the same “umbrella”.

Interesting they don’t touch VOY or ENT. I’m not trying to be criticial, I am a fan, but they weren’t the most popular on television and maybe IDW is not keen on touching series’ that weren’t bigger hits when they were out.
That being said, if ENT could pick-up where they left off (minus that horrid holodeck series finale) that’d be a fantastic monthly comic book series.

#9 Maybe if Anthony talks to someone from IDW he can ask if they plan on doing “Enterprise” and “Voyager” comics. Even though those two shows weren’t as popular as the others, I have to think its still a possibility.

IDW dont have the licenses for either Voyager or Enterprise. I dont expect them to add either in the near future, but you never know

I always thought an Enterprise: Year Five mini-series could be fun. Especially if they somehow included the Romulan War, which I think everyone wants to see

for your average comic book reader, things get pretty confusing after the maquis and jem’hadar and gamma quadrants and NX-01s and first Warp 5 drives. This is all fun for loyal fans of the franchise, but IDW is smart to keep things simpler.
Releasing an omnibus of Pike comics, concentrating on untold TOS stories, the Number One series, and now the upcoming McCoy series; IDW knows they have alot to work with just Rodenberry’s initial idea.
I’m a real fan, but I’m a practicial fan, and I recognize that anything they’re giving us thats TNG or DS9 are basically handouts for us hardcores.

Is it me or does that Kira get hotter every issue!

i cant believe they are doing pointless DS9 comics but the unfinished series, Enterprise gets no conclusion- such a missed opportunity- they should have got the rights to Enterprise- it might not have gotten the highest ratings on the then dying UPN but there is not much left to do with Voyager or DS9

I’d like to see more of that wonderful spaceship (the “Luck of the Draw”) from the first preview. I don’t suppose the artist has posted any concept art or something?

I think IDW is doing the right thing, after all Wildstorm wasn’t really successful with their Voyager Comics and Enterprise was never done in comcis. Anyway, when they began publishing Star Trek Comics they specifically said they would only do TNG and TOS, so the DS9 comic is already a bold move. And I’m hoping that we get to see more Trekcomics, now that IDW has become a premier Diamond Publisher. I’m somewhat surprised that there hasn’t been an article on this here on trekmovie.com

Did anyone else notice Quark using the catchphrase of ESPN College Gameday personality Lee Corso? I actually see a resemblence between Corso and Quark.

Voyager-wise I’m fine with the comics that already exist. Like the other series, I don’t really care about the stories that take place during the series, as they wont have any real impact (I mean, we all know they’ll be fine). I’d only want new Voyager comics if they did a post-Nemesis tie-in that maybe crossed over with TNG/DS9 like the novels are doing.

However, I think IDW could throw the Voyager fans a HUGE bone and release a Star Trek Voyager Omnibus, collecting all the Marvel and WS comics, plus the Star Trek Special One-Shot. It would be a little bigger than the current two Omnibuses, but not as big as some of the very nice Dark Horse Star Wars Omnibuses of late.

With that being said, I think Enterprise comics would be great. The show began to have a lot of potential, especially in the 3rd and 4th seasons, which sadly most people recognized too late. A Year Five series would be great, especially if they adapted some of the ideas that were proposed for the fifth season (Shran joining as an observer, lead-up to Romulan War, first Starbase, continue Mirror Universe story).

Also, as much as people whine about the Temporal Cold War (which was only really in a handful of episodes btw), there’s some unfinished story there that could easily tie-in to the Earth-Romulan War. In some interviews, the creators postulated that the Suliban’s benefactor “Future Guy” was a Romulan from the future who may be instigating the Romulan War to change history (of course being a pre-destination paradox). Not to mention that Silik didn’t die because “Storm Front” was undone, and he was a cool bad guy. I’d like to see this storyline properly and epically resolved (and future guy revealed).

An Enterprise comic could also tie-in to the current novel relaunch, or even adapt some of it. And how about one of the other series (like TNG) revisiting the Xindi? There were very interesting inter-species dynamics there and we know they intend to join the Federation at some point.

Enterprise still has a lot of potential, and with the Romulans being villains in the new movie, along with renewed interest thanks to the movie, maybe fans new and old would be open to reading some exciting new tales that are essentially a prequel to the new movie (as well as other series).

Totally agree with what you said. I’ve always figured the “Future Guy” was probably Romulan, simply because Romulans have always been finding ways to destablize other powers in the quadrant through subterfuge. And the way he spoke also reminded me of the Romulans.

Artwork shown here isn’t bad – at least DS9 looks like DS9 – though Sisko bears so little resemblance to Avery Brooks I wonder if they were barred from using his likeness.
Can’t picture Odo telling someone to “get lost” – seems to be a very human-centric phrase.