Welcome to another edition of Science Saturday. This week: how to use a laser like a tractor beam to pull objects, detect cancer with a very Trek-like smartphone app, look inside the sun to find the missing sunspots, and see the most beautiful, hi-res photo mosaic of the moon ever created. All this and more, plus our gadget of the week: jetpack skiing!

Researchers Design Working Tractor Beam by Teaching a Laser to Pull Rather Than Push
It is well known (to physicists) that light can push an object forward. But, the ability of a forward moving beam of light to pull objects backward is counterintuitive. Researchers have now shown, mathematically at least, that the so-called “backward scattering force” (BSF) is indeed possible. In the recently published article, “Backward Pulling Force from a Forward Propagating Beam“, Jun Chen and his co-authors demonstrate the specific conditions necessary to make a real-life Trek style tractor beam, which could move very tiny objects. The actual device is yet to be constructed, but this new mathematical theory has laid the groundwork for building the real deal. How soon do you think we will be seeing the first real tractor beam? Detect Cancer With a Very Trek-Like Smartphone App
Detecting cancer? There’s an app for that. A palm-sized MRI machine, powered by a smartphone app, may revolutionize cancer detection. Just as with large-scale MRI’s, this new gadget uses magnetic fields to “line up” molecules in tissue and sends a radio pulse through them. How the molecules respond to this pulse tells the doctor what they are made of. This handheld device measures the levels of specific proteins in a person’s tissue, the presence of which can indicate a cancerous tumor. In a trail of 50 patients, researchers saw a 96% success rate for detecting cancer. The pseudo medical tricorder is not quite ready for prime time just yet, but authors of the recent research say that the new technique, “shows potential for cancer diagnosis in the clinic.”


Read the full article in Science. Mystery of the Missing Sunspots
Research being published in the March 3rd edition of Nature may explain why sunspots disappeared for almost two years beginning in 2008-09. Fluctuations in solar activity are expected, but the recent solar minimum was “the deepest in a century” and longer than predicted. As solar activity reached 100-year lows, Earth’s upper atmosphere cooled, the sun’s magnetic field weakened, and cosmic rays were able to penetrate the Solar System in record numbers. Scientists now think that plasma currents deep inside the sun interfered with the formation of sunspots causing these Earth-felt effects. These conclusions are based on a new computer model of the sun’s interior. “Understanding and predicting solar minimum is something we’ve never been able to do before — and it turns out to be very important,” says Lika Guhathakurta of NASA’s Heliophysics Division. During minima and maxima, strange things happen that may affect Earth in ways we cannot yet predict. This new computer model should help us to forecast better the behavior of our sun.

A blank sun during the extended solar minimum

Highest Ever Resolution Photo Mosaic of the Moon
Using data from the Lunar Reconnaissance Orbiter Camera (LROC), Arizona State University scientists have compiled one of the highest resolution mosaics of the lunar nearside ever produced. You really must click on the image below to see a larger version of the file in order to really appreciate the beauty of the image. Phil Plait of Bad Astronomy explains why this new mosaic is so awesome:

“I’ve spent a lot of time at the eyepiece looking at the Moon, but I’ve never seen it like this. The detail is amazing, and the shadowing provides a sense of depth you just can’t get when observing the full Moon from home. It’s beautiful.”

The mosaic is made up of about 1300 separate images taken by LROC’s Wide-Angle Camera. The size of the full resolution image is an astounding 24,000 x 24,000 pixels, with the resolution of about 145 meters/pixel. The full size 550 Mb TIF file is available on ASU’s website, but you can also get a more palatable 1400 x 1400 pixel PNG file with labels, too. (via Arizona Geology) 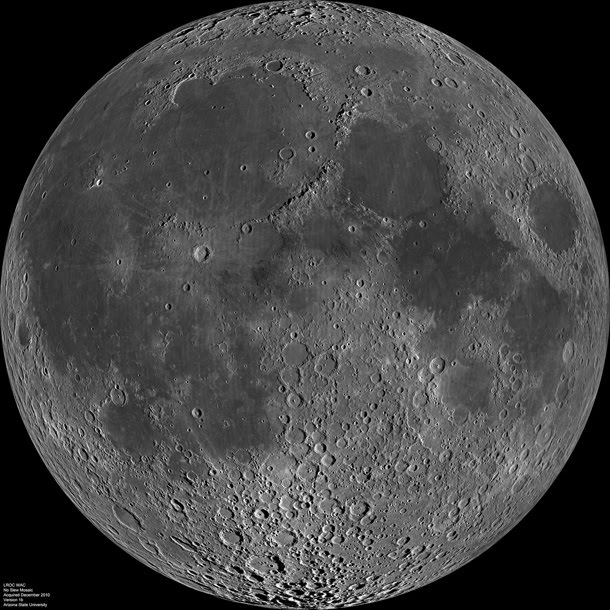 Pic(s) of the Week: Space Shuttle Discovery Lift Off

These amazing shots were taken upon lift off of space shuttle Discovery carrying the crew of STS-133 (and Robonaut2). The bright blue cone-shaped features coming from Discovery’s engines, which are visible in both photos, but primarily the first, are known as “shock diamonds“. Click for super hi-res version!
“No photographers were harmed in the taking of this photo.” Photo credit: NASA

Video of the Week: A Future Made of Glass
Tweeted by @Roddenberry last week, this video by Corning glass company demonstrates what the future could look like, utilizing the capabilities of glass technologies to their full abilities. Get ready for a magical future!

Gadget of the Week: Jetpack Skiing!
Okay, so not so much a gadget of its own, but a new and exciting use for existing tech. Troy Harman, stuntman and extreme sports junkie, has repurposed a decommissioned military UAV into a ski jetpack. With the jetpack strapped to his back and his boots clipped into his skis, Troy gets speeds of up to 47-mph going uphill at just half throttle! Who needs an expensive lift ticket when you can speed UP the black diamond slopes with a ski jetpack, no waiting! Check out Troy’s video below of the jetpack in action.

That is a very Impressive Picture of the Moon. The Sun with out Spots. Nice. I would love me one of them there Jetpacs. I can think of a few other things I can do with that. Trek Music to wake up to. Always a good thing.

Kirk. Scotty. Activate Tracter beam. Lock on to that Aircraft and hold it out there.
Scotty. Aye sir. Tracter beam on. We have the target.
Oops. Aircraft broke up and crashed and they had to beam the pilot aboard.
Tracter beam in our time. Kool.

My late uncle was a corporate kahuna at Corning. That YouTube embed gave me a Warm Fuzzy. :-)

“Corning glass company demonstrates what the future could look like, utilizing the capabilities of glass technologies to their full abilities. Get ready for a magical future!”

A future with your greasy fingerprints on every display. Yeeech! : 0

Remember that guy Scotty gave the transparent aluminum formula to? Looks like he went to work for Corning.

And that moon photo sure is sharpened to crystal clarity – I will definitely not attempt to adjust my picture.

I love seeing that old girl go up into space. Each and every time.

Science Friday (or whatever day it comes out) is my fave “column” on trekmovie.com.

Thank you so much for such great knowledge, links and sharing them.

Not that I wouldn’t mind any Star Trek Movie or new TV Series news and the usual news, rumors etc.

Lazy shuttle astronauts, sleeping in. 8:23am? Crap. They’ll miss my fabulous 4:30am show! Ah well, I’ll write it for the noon show then.

The hi-res of the moon is taking forever to download. I bet, when it does, I’ll be able to see Alan Shepard’s balls.

Golf balls, you pervs. He played golf on the… oh, why do I bother?

Ski jet pack? Harry can do that with one good burito.

Wow, the world of glass looks like something from “Minority Report.” And the I wonder if the jetpack gets hot. Excellent work Kayla.

AMAZING picture of the shuttle lift off! I love it! its going to be my desktop backround now :)

I keep looking at the moon photo and I can’t see any monolith in Tycho.