Star Trek: The Next Generation’s Marina Sirtis is celebrating her birthday today. TNG’s Counselor Deanna Troi turns 56 and we all want to wish her a big happy birthday. We also check to see what she is up to, including a clip from her appearance on last week’s Grey’s Anatomy, some recent photos, plus Marina talks about future projects with TNG co-star Michael Dorn.

Gene Roddenberry wanted to make Star Trek: The Next Generation a show relevant for the 80’s and the 90’s and one of the ways he did that was introducing a ship’s counselor to talk to the crew about their feelings, and to let Captain Picard know what was going on in the head’s of the bad guys on the other side of the view screen. And British-Greek actress Marina Sirtis fulfilled this mission and more so with her portrayal of the half-Betazoid Deanna Troi. Here is a ‘best of’ compilation of her work just on Season 4 of TNG (via Jamesmcburnie).

Marina continues to work as an actress doing both guest spots and voice work. In fact just last week Sirtis appeared of the hit ABC show medical show Grey’s Anatomy (episode "This is How We Do It"). playing a woman with Alzheimer’s who is part of a study. Here is a clip (via Hulu – USA only, sorry).

Sirtis did an interview about the guest role with Grey’s Anatomy fansite GreysGabble.com, and she talked about her future projects saying:

I have to fess up and say I’m one of those over-40 actresses so, as we know in this business, the work gets a little leaner as you get older. I’m actually working right now with Michael Dorn [who played Worf on TNG] and we’re writing and trying to produce our own projects. We’re still best friends and we always try to get things off the ground. We have a couple movies that look promising and they’re going forward quite nicely. We’re being more proactive than waiting for the phone to ring. 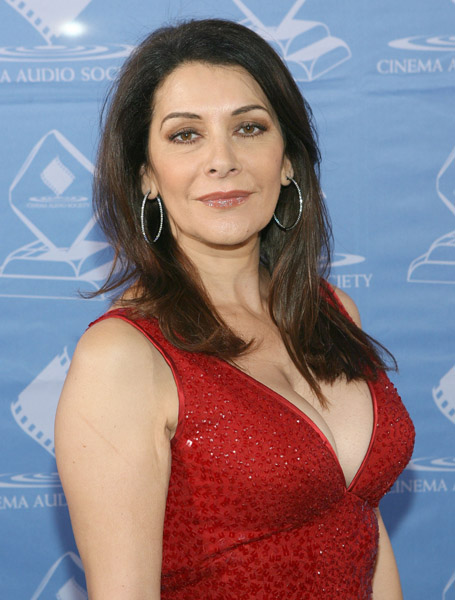 To keep up with Marina, visit her official site at www.marinasirtis.tv.

Glad to see her out and about!

Enough with the twitter happy birthday messages…why does Brent Spinner think the world needs to know about his birthday wishes to Sirtis? This is so self aggrandizing.

Memo to self: conduct web search for Bai Long photos.

She is just as hot today as she was on TNG. Happy Birthday Marina.

I think you just summed up the internet.

I think she looks like a knockout in that last pic, in the red dress. 56 and Wow.

Can definitely say she’s aged well and still looks great, can’t say that for a lot of Trek actresses (Jennifer Lien anybody)? Also loved that clip from Grey’s. I don’t watch the show but she was great. I remember back when she was on Stargate SG-1 doing that Russian accent, she nails it!

Whoa, MJ. We’ve been agreeing on many topics lately but I can’t agree with your comment that Spiner was being “self aggrandizing” on his Twitter account. Twitter is used to micro-blog. And frankly he has a lot of fans. Some of them are interested in what he is thinking. (over one million three hundred thousand followers) It’s one way of communicating with them. Yeah, it could be a way of keeping himself in the public eye. So what? He’s an actor. He’s got a career. Publicity is a good thing. Spiner is not the only celebrity with a Twitter account. And by the way a Twitter account is the basis for William Shatner’s sitcom.

All Brent did was to wish Marina Sirtis a happy birthday. And he wanted the world to know how he felt. What he wrote just let’s us know how much he cares about Marina.

MJ – Why should we wish any of these people “Happy Birthday” either? At least, there is a good chance that Marina Sirtis will actually read Brent Spiner’s message and at least she knows him.

Wishing anyone, either privately or openly, a happy birthday, wishing them well, hoping for their happiness is not a bad thing at all. It has got to be better than pouring out vitriol on some actor/writer/director, which is all too common.

Having said that – Happy Birthday Marina Sirtis. Many happy returns. Good luck with your projects.

I thought you were beautiful as Deanna Troi, so elegant, with an interesting and worthy Betazed culture (getting married naked – I loved that. True love where there is nothing to hide or conceal, being and giving just as you are…). I loved your accent as well.

And before I forget. This blogger wishes a happy birthday to Marina Sirtis. Loved you in “The Nth Degree” (short clip at 8:20 mark.) a show made way before “Limitless” came out about super intelligence.

Oh, by the way you’ve got a nice website.

Happy Birthday Marina! You look lovely as always and it’s just not fair that the work gets leaner because you are over 40. People just don’t age the way they used to and there’s lots to be said for hiring a seasoned actress who is still beautiful and has a ready made fan base.Is anyone in Hollywood listening? They still hire Patrick Stewart don’t they? Although he is very handsome, he looks his age. Hollywood wouldn’t discriminate against women would they? Oh well, I’ll still keep my eyes open for shows that hire my favorite actresses who just happen to be over 40. That’s my little way of protesting age discrimination. Love & Best Wishes, Kathy

Absolutely loved Deanna Troi, she was one of my favourite Star Trek characters of all time! And love Marina Sirtis, the lovely Greek Goddess who portrayed her so brilliantly! HAPPY BIRTHDAY MARINA, all the best to you, good health & happiness and longevity in acting! You look fabulous at 56 and should feel only pride in playing more mature roles on TV & in film… to hell with Hollywood standards of beauty! You were & are the Bomb! My Gorgeous Greek Goddess, Live Long & Prosper!

Her breasts are bigger than Shatner’s

@19. But the Shat’s gut still wins the overall circumference title.

Happy Birthday, Marina… who I might add, looks AWESOME!!!!

Man, I’m pretty thrilled that she actually looks her age — beautiful, as always, and probably even more so than when she was younger — but not trouty lipped, shiny or expressionless. That’s a face for some interesting, smart, complicated characters — and that’s meant entirely as a compliment.

I hope my wife looks that good when she turns 56. Truly a beatiful woman through the years. As good looking today as she was in 1987!

“Have you noticed how your boobs have started to firm up? “

Wow, can’t believe she is 56!! She is still one stunning lady, what class and elegance!

Love seeing her with the captain again!

Oops, sorry! Left out the “n” in Marina.

56?? I thought she was ten years younger than that. H.B., counselor.

Is BZILF a word? I should be.

Mean that in a good way.

I would still be honored to accept some of her “counseling.”

best BZILF ever! She looks swell!
I´d be her secondzadi.

By the way, that Grey’s Anatomy clip: incredible, Marina still has the acting chops. It was fantastic. If she was a major guest role, actors earn Emmy’s for stuff like that. Awesome.

Is there just not enough love for Titan to get made? Her and Frakes would make it perfect now…. Happy B-Day, Marina!

HBD Marina!
I will toast you tonight with some wine and saganaki!
(Greek kasseri- from the West Side Market here in Cleveland… you must visit!)

Nice shot of them laughing. My favorite kind of photo. A perfect moment in time, as Anij would say.

I used to see her at Star Trek conventions and she was always delightful. I got to say ‘hi’ to her when she was at Swarthmore College last Fall doing a musical event. She is still as friendly as ever! I don’t know why she doesn’t have a TV show of her own. She said she was doing a lot of theater and hopefully will be coming back to the Phila area for a production.

Patrick Stewart is a HIGHLANDER!

How can a best of Marina-video NOT contain “anticipation can be very arousing”?

You can just imagine what Patrick Stewart is saying to Marina in the third SAG photo :-) It’s great the camaraderie they spoke so highly of on the TNG DVD’s is still very much in evidence.

I would be honored t o shake Patrick Stewarts hand.
He would be the only reason i would eventually go to a Star Trek Con like Fed Con…
Ähm and Marina looks off the hook!!!

Oh man..now she can still carry herself good, and well the rest would not be nice to say here, but suffice it to say…she looks good! Happy Birthday!

Happy Birthday Marina!!! You look incredibly beautiful, and your guest spot on Grey’s was really good. I was hoping for u becoming a recurring character, but oh well.. I look forward to seeing you in more things- I know all about the “age” thing in the industry, but you are beautiful and should be getting more gigs!! Enjoy!!

Happy Birthday Marina. We met her last year around this time at a Hollywood celebrity autograph show near LAX. She was wonderful to talk to and we had her to ourselves almost. Marina told us about her being blackballed by Creations because she refused to limit her time with fans. She wants to spend as much time as it takes with each fan, like she did with us for an hour. We got lots of inside info on TNG and the movies.

While there were a few other ST actors there as well, hardly anyone was talking to these actors. Everyone was going for other actors from TV & Film.

Yes, she does look fantastic in real life as she does in these photos.