The area of Star Trek attractions continues to heat up. Today a new attraction themed around the 2009 Star Trek movie was announced as part of a larger Red Sea resort development in Jordan. Details below. [UPDATE: Artist impression of resort added]

Last month TrekMovie reported that a Star Trek attraction will be included in a planned Paramount Pictures theme park in Murcia, Spain. Now comes news that another international park is to include a Star Trek attraction, this time in Jordan. The Rubicon Group announced today they had signed a deal with CBS to include a Star Trek themed center as part of The Red Sea Astrarium (TSRA), a $1 Billion themed entertainment resort located in Aqaba, Jordan.

The Red Sea Astrarium will offer "immersive entertainment experiences" along with five-star accommodations, theatrical productions, nighttime spectacles and dining and shopping. The plan calls for various sections of the resort to be themed different parts of history of the surrounding area including Nabatean, Babylonian, British and Roman influences. The Star Trek section is to symbolize future history and is said to be "inspired by" the 2009 Star Trek movie and will be designed by Paramount Recreation.  The press release details the Star Trek center:

[The Star Trek-themed center] will deliver a variety of multi-sensory 23rd-century experiences, culminating with a state-of-the art space-flight adventure that takes real-time immersive entertainment experiences to bold new heights. This exciting, world-class attraction will serve as the cornerstone of the TRSA sector’s world of tomorrow.

At its core, Star Trek is about bringing worlds together and about a profound hope for the future. We are proud to bring such a unique, interactive Star Trek property to this part of the world to be a part of Jordan’s future. TrekMovie has confirmed with Rubicon that financing for the project has already been secured and they are confident in opening by 2014. This means that the Star Trek attraction at The Red Sea Astrarium would be the first Star Trek attraction built outside the US (the Paramount Murcia Park is planned for 2015).

The release also notes that the signing ceremony was held Saturday "at the Jordanian-American Business Forum under the patronage of His Majesty King Abdullah II of the Hashemite Kingdom of Jordan." One has to wonder if King Abdullah had suggested Star Trek be included in The Red Sea Astrarium, as he is known to be a big Star Trek fan who even had a uncredited cameo (as background Starfleet crewman) on an episode of Star Trek: Voyager in 1996. 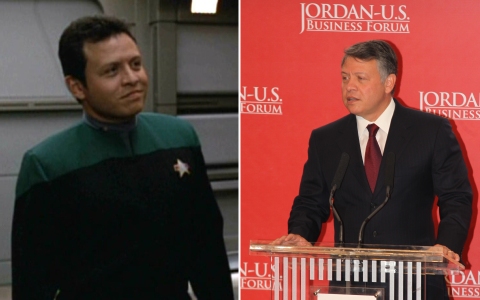 TrekMovie will continued to monitor this exciting project and bring updates when they are available.

Now if i only had the money to go to Jordan!! God save the King!

“At its core, Star Trek is about bringing worlds together-”

Lies. As the profoundly titled “STAR TREK” movie clearly demonstrates, Star Trek’s priorities have always been about ensuring the survival of our own planet Earth and continuing the human dominance and reducing all alien roles who aren’t human to mere one second on-screen shots. This film is so alien friendly, it took the only alien crew member (who just so happens to be half human) and treat the only alien element of his character as a flaw that needed to be purged. “Put aside logic” says his overjoyed future self just after the 6 billion plus genocide of an entire race.

“- and about a profound hope for the future.”

And by hope for the future, we mean that if we run out of ideas, we can simply do another “Earth is in danger!” storyline that hopefully won’t involve another stupidly insane Romulan associated rock miner. Because nothing says “To boldly go where no one has gone before” more than saving Earth from peril!

FFS Jeyl give it a rest and stop trolling your issues with the movie in every thread. This is about a theme park

Jordan has been one of America’s best allies. I’m not going to say all is perfect. But, King Abdullah II is western-educated and a Trekkie. And hey, if we’re gonna start building starships, maybe some of his oil buddies could chip in. Or maybe they’ll become ODEC, The Organization of Dilithium Exporting Countries.

Are any of our regular posters from that part of the world, just out of curiosity? It would be cool to hear the opinions of some local geeks. :)

Well, at least Jordan has the money to build it. It’ll be interesting to see who’s not on the guest list at the grand opening, though.

I do actually agree with you that Star Trek is a little too human-centric at times. However, this is by no means something new to the 2009 film. I actually find the famous line in Wrath of Khan, “Of all the souls I’ve encountered in my travels, his was the most…human” to be one of the worst examples of this.

Ummm… Isn’t this an American show? I mean, isn’t it from the USA? Why isn’t there a plan to have such a theme park here? I have no problem with Trek parks overseas but one should be here as well. And it needs to be kept fresh and current unlike STTE did in Vegas. I loved that place but it was stagnant the last few years.

Having been to ‘Aqaba several times from the U.K. that would be a great place for a Trek theme park providing there is sufficient activities in the shade! The last time I went it was on the high side of 55C and even the locals were getting sun-stoke.

Having said that, Jordan is a great country with loads to see and nice people. I remember reading how the Jordanian King goes out in the desert on manoeuvres with the military he used to ensure he had his entire Trek collection with him on video. I guess he’ll be on the remasterered BluRay like the rest of us now :-)

I just don’t understand why people who hate the movie so much come to this site.
Very interesting to see a Star Trek attraction in an Arab country.
عظيم ستر تريك

This is amazing as in my experience most Arabs have never heard of star trek.

Trek 09 is not only a great Trek movie, but a excellent film on its own merits. The hatred for it comes from a very vocal minority. IMO

@ #10: “I just don’t understand why people who hate the movie so much come to this site”

HMm. I must have missed the meeting where Trekmovie.com was announced as a site about that movie…that’s what your post implies.

I read that William Shatner visited Iran to host a sports show there (or something like that) and Star Trek was quite popular. This was before the Ayotollah Khomeni took and everything western was chucked out.

TrekMovie welcomes all points of views and all interests related to star trek. We launched in 2006 about the new movie but quickly diverged to be a general trek site and now the highest traffic indie Trek site. So all are welcome.

All we ask is people be respectful of their fellow fans. we are all Trekkies here

Just glad to hear their working on the Trek Brand.

Would love to hear more nears about the Trek Sequel though :( JJ Directing?

I was in Aqaba very briefly (basically drove through) on a one day trip to Petra via Eliat in Israel. The Jordanian tourism industry is very proud of Aqaba and they are pumping a lot of money into it. It is the only part of Jordan that touches the sea, and it definitely has an Atlantic City vibe to it.

It is worth noting, however, that Jordan being a Muslim country does not permit the selling of alcohol – which is allowed in next-door Eliat. Hence, a lot of the tourism money from Europe winds up going there. A smart move on Jordan’s part to build this historical (and future-historical) destination site. There is a lot of fascinating history in this part of the world.

This is certainly not a bad thing…its great a king loves trek and wants to promote it in their amusement parks….Just makes me wish something was being designed and or built for american amusement parks, disneyland or even VEGAS again….kinda sucks other countries are moving ahead with state of the art attractions about Trek While the originating country of both trek and one of a kind world attractions like Disneyland and Disney, Universal Studios et al cant even resurrect the Trek Experience in Vegas without someone putting up the money for it….

At first I have not been wanting or thinking about Disney making Trek Attractions but if all these parks in other countries are doing it maybe the NUMBER ONE Amusement Park company in the world DISNEY SHOULD do an Ultimate Trek Attraction or two at their two parks kinda like Universal has done with Harry Potter (which is Warner Brothers isnt it) not universal??

I feel like these other countries are beating America to the punch when America originated theme parks and Trek..SIGH….

Id still luv to have the experience back in vegas too. How frustrating…

Also others may sound politically un-correct mentioning it but This American besides not having the funds has a probably irrational fear of flying or vacationing outside the country….

maybe in a few years we will all feel more secure….I dunno….

Jordan not a place number one on my visit list…so far anyway….ask me again after the attraction opens and how cool we see it is hahaha..

In the early 70s when I managed to hook up with other Trek fans and later went to some of the NYC conventions I was taught that “Trekkie” was an undesirable title since it implied the…ahhhh…younger fan set who went running around screaming their heads off and being somewhat obnoxious (early versions of Wesley Crusher?).

The preferred title was “Trekker” as it implied our great maturity and sensibility in being fans of Star Trek–we understood the philosophy and values behind Star Trek rather than being enamored by the various toys, girls and ships of the show.

On the other hand, the phasers were really cool, the girls very sexy, and the ships almost as sexy! :-)

At least some thing is being built… too bad it is not in the USA but if this thing is successful, Paramount/CBS may be inspired to do something here again.

This place in Jordan is based on Trek 2009, if that was done here, there would be a bunch of people against that type of plan because it leaves out TOS, DS9, ENT, VOY and TNG. What is needed is a place like STTE was in Las Vegas that would or should have a little bit of everything.

First and foremost, would be another Quarks!

Ahh but remember all the tos fans on this very website who complained cuz the experience was set in the tng era n didnt have enuf tos in it–always made sense to me since it was a history of the future museum—so it couldnt be set up in tos era right? oh well i doubt any trek fans will ever agree on anything-maybe thats part of the problem…

Another potential terrorist target…in sure they’ll be kicking the king out before the thing is finished being built. Overthrowing moderates is all the rage in the middle east these days…

In the eyes of the radicals, this place would be for “infidels”.

Not everyone subscribes to I.D.I.C….lol!!!