Our photo of the day comes from the UK and a reunion of Star Trek: The Next Generation’s Sir Patrick Stewart and LeVar Burton. Burton took a picture of the pair backstage at Stewart’s newest Shakespeare project, a modern adaptation of "The Merchant of Venice."

Photo of the day: LeVar and Patrick

The photo of the day comes from LeVar Burton who took a picture of himself and Sir Patrick Stewart, backstage today at the Royal Shakespeare Theatre in Stratford-upon-Avon. 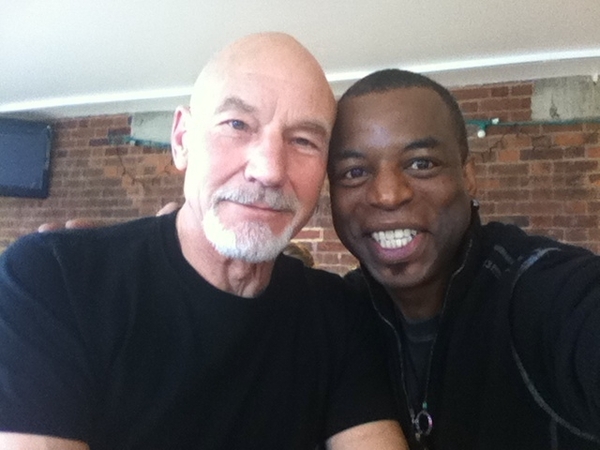 Stewart and Burton together again (Photo: LeVar Burton via Twitter)

Burton is in the UK and attended a performance of "The Merchant of Venice" at Royal Shakespeare Theatre in Stratford-upon-Avon. Stewart stars, playing Shylock in a modern adaptation of Shakespeare’s classic play set in Las Vegas. The production opened last week and runs September 26, 2011. (visit RSC.org.uk to buy tickets). Stewart brings some Vegas to Merchant of Venice (Photo: RSC)

I for one still hope that TNG gets a better send off than Nemesis.

TNG cast is full of neat folks. Seems that they get along great. Some of the original cast can learn a thing or two from these guys, it seems.

Patrick Stewart looks good with that hair. Perhaps he could make it a permanent fixture. Nothing wrong with toupees. Never hurt our Shat!

Stewart and Burton look younger in that twitter photo than they do 20 years ago in TNG!

4. That is a scarily good point. As long as we film a TNG reunion with mobile phone cameras, it should look like they haven’t aged a day! :P

“We’ve got a problem with the warp core or the phase inducers or some other damn thing.”

Commodore Mike of the Terram Empire.

Sir Patrick Stewart looks great with the Hair. Looks younger. Maybe they cast him as Picards Grand Dad in Trek 2.

#1. I for one still hope that TNG gets a better send off than Nemesis.

Another TNG movie would be welcomed, unfortunately all of them have said they’ve put that chapter behind them. And the way movies are now, it’s suddenly not hip to be over 50 and in an action movie. I for one wouldn’t have a problem seeing them all on screen again.

@boborci – get them in a Trek Animated project!

How about setting it in the TREK universe? “The Merchant of Venus,” anyone?

To see these guys suit up one more time… would be beyond special. We need a new series!!!

LeVar is in England to attend Collectormania in Milton Keynes along with Gates McFadden and John DeLancie and I’m off to it in the morning!! See you soon Geordi.

YES… I loved the photo!

Love them. I would like nothing more than a tbh reunion. And #6, that was awesome.

I would love to see another NEXT GEN movie. Picard with the goatee would look cool. Ambassador Picard! If Jordan can spend $1 billion on a Trek Resort, surely those investors could spend some money to make a final TNG film!

Even I’d like to see another TNG movie, but its clearly not going to happen and thats just the reality of the situation.

That photo looks a bit like All Good Things.

Sir Patrick looks awesome!! I would love to go see him in The Merchant Of Venice!!

dammit sam beat me too it

“Star Trek The Next Generation: The Search for Data”…?? Actually, it could work..well, maybe not this title/concept. But the comics released prior the Trek 09..background story for Nero, why Spock thought he had to save Romulus, etc. wasnt a bad idea. Picard was an ambassador and B4/Data was now Data and captain of the Enterprise E. I dont know..they could skip a few years like they did for The Wrath of Kahn..this is just where we pick up our characters’ stories..and go from there with a plot. Then it would match their current ages like it did for Shatner and cast.

Btw..@9 Tom…why does it have to be an ‘action’ movie..why can’t it just be a Star Trek movie? That was always mine or other fan’s biggest gripe when Berman held the reins..why he thought there had to be a strong protagonist. Why cant there be an adventure, an idea that needed to be explored like was Roddenberry’s original concept.

No gripes against you, sir..of course.

There really isn’t a need to do a “search for Data” movie. His programming ends up rewriting and taking over the less evolved B4 programming. I do think that he should be B4 at the start of the film, working on the Enterprise or at a lab or something, when the Data programming kicks in. I can imagine the character in a tense scene turnig to someone after being called B4, and saying “My name is Data.”

I wrote an epic script that would do the job. based on the 1995 ibm pc dos games called Star Trek : A Final Unity I emailed it to Brent Spiner & CBS never hear back from anyone. – Travis

But some people are speaking American, I didn’t know is Elvis Presley on stage, I think i want to say to Patrick Stewart I am so sorry about my mom’s cell phone i am completely embarrass i hope to forgive my mom I think i like it Very good Acting, i know is Greed, money but very good acting 100.00 Stars to the Cast of The MERCHANT OF VENICE, Rupert Goold for directing, Patrick Stewart you are Fabulous acting i wish i can be an actor like you, i am so very sorry my apologies for my mom’s cell phone I never Disserving your acting my public apologies for Stratford Upon Avon , the press good acting Everyone I am so Very proud of you