Star Trek VI: The Undiscovered Country left a lot of open-ended questions. While there have been a few visits back to that "Lost Era" over the years, none have addressed the medium-term repercussions of the Khitomer Accords and the devastation wrought by the Praxis detonation. That all changes James Sawllow’s brand new novel "Star Trek: Cast No Shadow." The TrekMovie review is below.

When a massive explosion rocks the ongoing relief efforts, a Federation intelligence officer, Elias Vaughn (who will be familiar to readers of the Deep Space Nine Relaunch) discovers evidence that begins to contradict the official Klingon version of events. Since a Federation starship was lost in the detonation, the High Council begrudgingly allows another Starfleet ship to visit the system… the Excelsior, under the command of Hikaru Sulu.

Sulu and Vaughn are not alone, however. Joining them is Valeris, the disgraced ex-Starfleeter who served as go-between for Admiral Cartwright during the planning of the Gorkon assassination. Because of the connections uncovered by Vaughn, Valeris becomes a natural asset to the investigation, though Vaughn’s estimations of her are about as low as one can be. Commander Miller, the senior Intelligence operative on the mission, seems to hold a slightly milder view toward Valeris, and provides valuable insights for Vaughn’s long-term consideration.

Of course, to be interesting, things can’t possibly go as planned, and soon, Valeris, Vaughn, and a Klingon Intelligence operative named Kaj are on the run throughout Klingon space, seeking out the real story behind the current carnage, and discovering that all roads lead to annexed world or Krios, a world which has known the heel of Klingon boots for over thirty years.

As Swallow’s tale unfolds, he takes the time to journey progressively back in time to discover key points in Valeris’ evolution as a person; moments which ultimately give full weight to her actions in the Gorkon conspiracy, and her unapologetic nature when confronted with the truth.

Capt. Sulu and Valeris are back for "Star Trek: Cast No Shadow"

“Cast No Shadow” has plenty of action and offers a wide variety of locales in which to allow one’s mind to roam free, but, at the same time, the weaknesses of the story are pretty evident. Much of Valeris’ real-time evolution is predictable, and the use of Elias Vaughn, while giving some positive build to his character’s overall history, makes even his most serious setbacks in the story feel significantly anti-climactic.

Most disappointing, however, is the root of Valeris’ bitterness. Gone is her (albeit flawed) logic seen in Star Trek VI, replaced by stereotypical childhood issues. Also it is surprising how non-relevent Spock is to the story, which is odd considering the prominence with which he is featured on the cover. If you are picking this up as a Spock story, you may as well put it back down. This story is equal parts Elias Vaughn and Valeris, with Spock taking up what can best be described as a 10-page cameo.

I can’t say with precision where “Cast No Shadow” lost me; more than half-way through I still saw a large amount of unbridled potential. But slowly, things just fit together too seamlessly and with far too much cliché. Ultimately, while well written and generally engaging, the book comes across as a something of a lost opportunity. Lost Era junkies (such as myself) will want to give it a read to fill in some of the blanks left in that wide gap that precedes Picard’s rise to command. Fortunately, it is very difficult to see any major losses to current novel continuity that skipping this book will cause for the average reader.

"Star Trek: Cast No Shadow" is available now at BarnesandNoble.com. 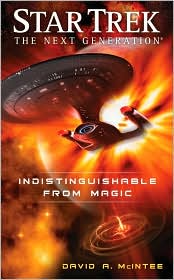 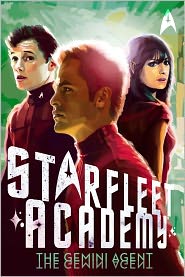 And coming up in August is Steve Mollmann and Michael Schuster’s "Star Trek: A Choice of Catastrophes," a standalone classic Star Trek novel which finds Dr. McCoy dealing with a mysterious illness which incapacitates the crew. Pocket Books provided TrekMovie with a copy of this book for review.

Looks like it could be a good read. Might just get it. Also. Looking forward to seeing the new books based on trek 09.

As with so many of the Trek novels over the last decade or so, this one sounds dreadfully boring. Who wants to follow Valeris around and learn about her childhood? Good lord, that sounds boring beyond belief!

Thanks for the review, especially since it sounds like your reaction is about what I’d expect from this novel.

Thanks for the review but i think I’ll pass. I agree with the comment #2 this sounds boring.

I just bought this novel yesterday at 20% off at a Borders store closing. I’m actually more interested in this novel after reading this review because I’m a fan of Elias Vaughn and want to know more about Valeris. Of course, I love Spock, but there are so many Spock stories that it’s nice to learn about these other two characters.

I’m a big enough Star Trek VI fan to give this a twirl despite the review. I hope to find it better but I probably won’t. D:

What? What? What? How? Valeris murdered two men in Star Trek VI and committed treason against the Federation!

Sounds like too huge a stretching of suspension of disbelief for me.

I agree. There is absolutely NO way that a sane person could ever see the logic in letting Valeris out of prison. I understand its part of the message of “Star Trek” that people can change, but this is ridiculous. Valeris was a cold-blooded murderer who showed no remorse and even attempted to put the blame on Captain Kirk while justifying it.

And Valeris was never a popular character to begin with!

I hate the Star Trek novels based on the Trek movie of 2009. I tried one and after reading a couple of chapters, I threw the book in the garbage. It was written by authors who I enjoy like Peter David, Keith Decandido, David Mack, etc. These guys were working on books based on the new Trek movie, but it was nixed.

#8 – Are you referring to the young adult books?

I have always thought that Star Trek VI would have been a tiny bit better, and the racism more shocking, had the character of Valeris actually been that of Saavik…a character we came to love through the previous movies.

Wow, aside from Beier VOY stories it appears there will be no good Trek reading for a while…

I can’t imagine why Pocketbooks would go on a Valeris trek when they haven’t capitalized much on the reboot – at least not from the adult crowd, which I suspect is still a bigger than the teen Trek universe. From a marketing standpoint, you’d think the latest movie would draw more sales than a return to Valeris – Good grief.

Many thanks for the hint that this is not a Spock story. I had thought it was.

12–I think that’s a Paramount issue, not Pocketbooks. From what I understand, Paramount does not want books based on the new universe until the next movie comes out.

I plan on picking this book up. I’m glad for the warning about Spock not being a big part of the story though. I’m an avid novel reader and have gotten used to seeing other characters. I always liked the Vaughn character and look forward to reading about some of his earlier life.

Re; DS9 however, I would love to see the relaunch continue. I’d especially like one of the authors to fill in between The Soul Key and The Typhon Pact novels. Apparently a lot happened those 4 to 5 years, especially to the characters themselves (maybe like what Beyer did with the Voyager “Full Circle” Novel).

I would love to read a Trek novel that for once, FOR ONCE, does not have Elias Vaughn in it. He’s like Pocket Book’s universally agreed upon Mary Sue these days.

#15 – Thanks, Damian, for the reply. I hadn’t been able to fathom… but I can now imagine why Paramount might want to get the new timeline more established before opening the reboot up to broader interpretation.

I wouldn’t be surprised if they later revealed Valeris to be a Section 31 agent, since I do recall it having been somewhere stated that the Gorkon incident had been a Section 31 operation gone wrong…

I like that they are giving Valeris a backstory. But the more I think about it the more I would have perferred it to have been Saavik instead of Valeris in Star Trek 6 as was originally planned. It would have nicely closed the arc started in WoK.

When we first meet her she’s undergoing a traumatic exercise in which her and her crew are destroyed by a group on Klingons as they try in vain to save innocent people. From the git-go she and all officers are bred with that kind of hatred. Then she is captured, her comrades on the Grissom destroyed without a thought (From her perspective, at least). They give Kirk no opportunity to surrender before trying to off her, but instead they kill David, a man she potentially has feelings for.

Even for a Vulcan, that kind of experience has to mess you up, and Saavik is very young. So we allow her and Spock to have this deep friendship that is established (Even furthered by the fact that they were intimate), and she already has good and sympathetic reasons for hating the Klingons.

I think it just would have added that much more layers to my favorite Star Trek movie.

#19 – I think a lot of fans would have preferred for Saavik to have been carried over to Trek VI as opposed to introducing yet another Vulcan front-seater. I’ve heard different ideas as to why Saavik didn’t make it, ranging from Roddenberry poo-pooing the idea in pre-production consults, to Meyer not wanting that to happen to a Trek II creation (though I have yet to figure out who actually proposed the idea of Saavik), to the inability to get Kirstie Alley to come back and reprise the role. (I preferred Robin Curtis anyway, but hey, nobody asked me…)

Long story short, it would have been a far more dramatic choice, but for whateve real reason, that’s not what happened… much to the detriment of the finished film.

20–According to Memory Alpha, Nicholas Meyer wanted it to be Saavik and Roddenberry objected, saying she would never betray her oath. Meyer thought that was a bit ironic, since she was created by him (and the writers), not Roddenberry.

I kind of agree. Seeing what we did of Saavik in Star Trek II to IV, I have a hard time seeing her as a traitor too. Plus, according to some things I have read, it looks as though they were considering casting a 3rd person in the role anyway (not Alley or Curtis).

Kirstey Alley’s Saavik should have been in VI as they could have used the original idea for Gorkon’s assassination; Saavik eats Gorkon after the dinner with the senior staff.

Valeris instead of Saavik was Roddenberry’s literary ‘last breath’ into Star Trek. Saavik would have worked so much better considering her backstory; as to Section 31, they did not come out of the closet until much later in Trek canon, even though they are supposedly there from the very beginning…