Over the weekend Star Trek: The Next Generation’s Patrick Stewart attended Wizard World’s Chicago Comic Con and at the event he was asked to sort of officiate over a marriage proposal. Video of the romantic moment has gone viral in a big way. Check it out below. We also have more from Wizard World Chicago.

While much of the Star Trek focus for the weekend was at the  Las Vegas Creation con, Wizard World Chicago had about 70,000 attendees and some of its own Star Trek content, including Sir Patrick Stewart. A great moment occurred when a fan proposed to his girlfriend in front of Patrick Stewart, who after applauding the duo along with the crowd, didn’t miss a beat saying “Engaged!” which delighted the audience. Here is the video.

Sir Patrick Stewart, Levar Burton, Daniel Stewart
Sir Patrick Stewart and Levar Burton made a rare Chicago appearance at Wizard World, along with Sir Patrick Stewart’s son and “Inner Light” co star Daniel Stewart who returned for his second Wizard World con. Unlike some other guests, the trio were on time everyday for their signing events showing a professionalism and concern for waiting fans that others could emulate, and took a few moments with each fan to chat and say hello. For example, Patrick Stewart chatted with our son Nicky who in addition to Star Trek enjoys whale documentaries that Stewart has narrated. Another great moment occurred when a fan proposed to his girlfriend in front of Patrick Stewart, who after applauding the duo along with the crowd, didn’t miss a beat saying “Engaged!” which delighted the audience. Daniel Stewart was equally nice to all the fans.

LeVar Burton got a special treat when a fan asked him to sign his action figure from Captain Planet which he had not seen before. A great moment for us occurred when we completed obtaining a signature of all the main cast on an 8×10 and Levar rang a bell for us to commemorate. Burton twitted fun pictures of him and his former captain on the town. 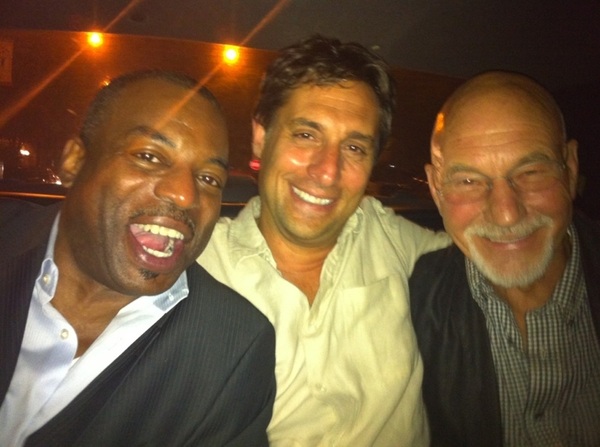 All three stars also held panel discussions which were packed with fans. Stewart was incredibly funny, sharing stories about how Star Trek: The Next Generation fellow actors taught him about having a sense of humor.

Star Trek III:The Search for Spock villain Christopher Lloyd was also in attendance. He had a steady line of autograph seekers and his photo op included the option of taking a picture with him and the Back to the Future DeLorean.

Most people recognize Anthony Michael Hall from his John Hughes movies, especially The Breakfast Club. Sci-Fi fans, however, know that Hall also starred in Edward Scissorhands, No Ordinary Family, Batman: The Dark Knight, and The Dead Zone. During his panel, the actor, who was exceptionally fan friendly and a very kind man, praised Michael Piller and writer Michael Taylor many times for their work on The Dead Zone. He also mentioned their work on Star Trek and the role that Piller played co-creating Deep Space Nine and Voyager.

Here is some official Wizard World video with Hall.

We have been attending Wizard World for more than 25 years, back when it was called Chicago Comic Con as some continue to refer it to as it today. We have never seen as many Star Trek costumes as this year, showing the resurgence of Star Trek. While not the complete Star Trek experience of a Creation Convention, Wizard World provided fans unable to get to Las Vegas a weekend of Star Trek fun.

For those awaiting the full reports from Star Trek Las Vegas, Anthony’s tech issues have been resolved and those reports will start coming today with pictures and more.

Stewart is all class!

I’m trying to find the words to describe this girl without being disrespectful…
DAMN girl :D

So every time there’s a new post, it deletes the prior post? That seems to have been happening the last couple of days. :(

The only deleted posts are the “live tweeting” articles which are short term live event posts. There will be full posts for those live events coming up soon. If you have spotted the twitter posts or posts within the coveritlive, I had a major computer meltdown in Vegas. New computer now up and running but when i got to LA my internet was out. Cable guy just left and now All is now well.

That is really cool! Good for Sir Patrick too; very gracious to give them their geek-romantic moment. My wife and I are also ‘geeks in love’ and having someone who shares your interest/passion for sci-fi? It’s the BEST.

Thanks for the update, Anthony.

Great show! Good crowd. Lots of stars. We saw both Sir Patrick, Mr. Lloyd, and Mr. Hall. I picked up a Gotham Police badge, my son picked up a poster with zombie apocalypse survival tips, and my daughter met Ianto from Torchwood. We’ll be there again next year.

@5. Yea, nothing worse Anthony then when a hooker spills a drink on your laptop! (just kidding bro!) :-)

What’s the point in watching the marriage proposal video, if you just give the gag away in the title? <_<

And Anthony Pascale I understand it … great is all ok now!

I vote for all women to star wearing shirts like the one of this proposal video!

TNG was not my show but I have an appreciation for Patrick Stewart (just seeing him make sport of himself with Ricky Gervais in an episode of EXTRAS made me a fan). Fun video. Yes, class person.

Wizard World SUCKS. I was there in all my Star Trek glory and it just sucks. The ST stars need to go to C2E2. Soooooooo much better.

I wish Christopher Lloyd were working as an actor more these days. He is one of the most genuinely talented ones in Hollywood.

@17 “Wizard World SUCKS. I was there in all my Star Trek glory and it just sucks. The ST stars need to go to C2E2. Soooooooo much better.”

Where is my universal translator when I need it?

Very cool of Sir Patrick to do that. Many years of happiness to that couple.

Sounded like a good crowd n the trek stars were appreciated-i think its great they went to a smaller trek venue the same weekend of the vegas creation con—they probably enjoyed it too-i bet the fan/star interaction is less stuffy,less commercial and more rewarding for fans n stars on a more personal nature—were the trek stars snubbing creation or was it just prior commitments i wonder-

Sounded like a good crowd n the trek stars were appreciated-i think its great they went to a smaller trek venue the same weekend of the vegas creation con—they probably enjoyed it too-i bet the fan/star interaction is less stuffy,less commercial and more rewarding for fans n stars on a more personal nature—were the trek stars snubbing creation or was it just prior commitments i wonder-

Sir Patrick is a true class act. I am sure that couple will have some great stories to tell there children. Most of the Actors of Trek are truly 1st class people.

I love Sir Patrick Stewart. Such an amazingly classy guy and very genuine; you can see how touched he is by the proposal. Truely one of the best!

@ Anthony Pascale
Glad to hear you’re up and running again!!