To up his follower count on Twitter, Star Trek co-writer producer Roberto Orci has been suggesting he will send out an image or two from the set of the new Star Trek sequel currently in production. While he tries to sort that out, today he sent out some "appetizer" photos from his personal collection of behind the scenes shots during production of the 2009 Star Trek movie. Check those out below. [UPDATED]

Here are some photos Tweeted today by @boborci. They are all from production on the JJ Abrams first Star Trek movie back in 2007 and 2008. Orci says these are "appetizers" while he tries to get JJ to approve sending out something from the sequel currently in production. whole family, from in front and behind the camera me on set, which can sometimes be dangerous 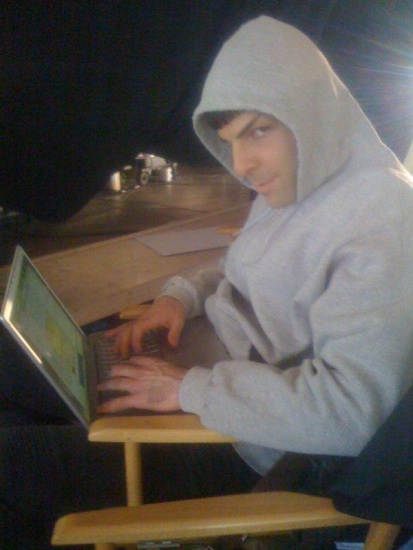 Bob clarified that this photo was actually from location shooting in Italy for Mission: Impossible: III. Me, Alex and JJ doing on set rewrites [on Mission: Impossible: III]

But what’s the new film gonna be called????

So much more exciting, impressive, meaningful, etc., than my job.

Good stuff. Count your blessings on a regular basis, Mr. Orci. Thanks for sharing.

Bob, you do realize just want a friggin great life you have, right?

4. I do realize how lucky I am, and with many of you to thank for it, too. Thank you.

I like this pics! Hopefully we get to see some new ones here in the next few days…

thanks bob! looking forward to some “newer ones” as well.

thought i’d throw out a little pet peeve since i played “good cop” first :) one littlle thing that bugged me a bit about st09 was the sound of the phaser fire. both from the ship and from the hand phasers. i thought they sounded a bit “thin”. a little too “pingy”. any chance those could be beefed up somehow to match the overall lush character and sound of the rest of the film?

I promise i would be a great asset to the new movie, what do you say bob?! i’ll pack my bags, and fly right out to do whatever incredibly important task it is that only i could complete within the production.

I promise my role is vital in the sucess of this movie :D

Thanks Bob! How much fun would it be to spend just a few minutes hanging around the sets? Let’s have a visit-the-set contest! (I would assume “airfare and lodging not provided” would be a standard disclaimer….)

Thanks for those pics Bob. Way cool!

On set re-writes? Was this during the writer’s strike? Hmmm…

RE: rewrites
Well remember that there were a few weeks of production following the end of the writers strike in February 2008

And I was reminded how much I loved the INT. of the Enterprise. Such a cool design! And seeing LN was cool to. I think its time I break out Star Trek 09 and have another watch, its been a while. :]

Awesome. Man do I miss working on the Paramount lot! Was there from 1995 to 1998. Was lucky enough to be an extra on the DS9 episode “Trials and Tribble-ations”. Any chance you can use me as a gold shirt in this one?? *grin*

oops! Just realized that picture of us writing is from MI3 in Italy!!!

Ha! Well, you get the idea.

Doing on-set rewrites??? During the writers strike??? Nah, it was just a tweak of the script. A polish, a little edit, a button. ;p

OMG, OMG!!!! Zachary and JJ photos just made my day.

you can see the MI3 badge dangling from Alex’s neck!

Bob & Co.: No worries! I don’t care when that script was written. I’m just glad it was extremely great! I anticipate the same for number 2!

17: I was going to say that…that looked totally Italian.

Anyway, these shots are really cool. Even though they seem iPhone-ish, you should put together a collection for a behind-the-scenes book.

BTW: It’s so cool that I drink the same soda (Coke zero) and use the same computer as JJ Abrams.

Thanks, Bob. These are fantastic.

Good luck on the new film, Bob, where can I write you a fan letter or for an autograph?

I hope you will put some photos up from this years Star trek movie. soon.

The current production would be nice, but these are just great to me!

I understand why it all has to be kept hush-hush, but so glad for the (sanctioned) little tidbits we get. And these are great!

And Spock/Uhura right next to each other is PERFECT! :-)

I have to say the whole family pic and the one of Zachary/Spock are my favorites.

BTW Bob, nice lens flare on the Nimoy pic. Were you contractually obligated to do that?

Yeah – Bob any chance if i send a letter you’ll send me the bridge set to Scotland – lol!
Good luck with the production – cant wait!

The photo with the whole cast and crew is appropriately with lens flare. The picture of Zachary Quinto in the hood has Mr. Quinto with a look that we have seen many times in his role as Sylar from Heroes.

To BOBORCI: can we get an appearance of the Vulcan Harp and a Spock/Uhura duet? Also, can we get another look at Sulu’s awesome folding katana? Seriously, I loved that thing, seeing him pull that out was great, can that be made into a collectible?

So if you were permitted to send out non spoiler set pics, what would the categories fall under? I would assume that any Enterprise Bridge set pic would be permitted, had it not been altered in any way to look damaged? And will any pics of our Hero’s be permitted to be shown?

36. I’ll let JJ and the studio decide, but since they just contacted me wondering if these pics were new, It sorta proves the point that we should release new pics! I mean, if they can’t even tell the difference LOL!

I’m assuming we should be able to release hero pics soon. We’ll see.

Thanks for the quick reply, man. Good luck and take care, all of you.

Bob – Can you shed any light on when the first teaser trailer will be released or a new website for the movie? I suppose it’ll fisrt show up in one of the big summer movies. I think I just answered my own question!
Thanks Bob!!!

Thanks Bob, these are great! You wouldn’t happen to have the actual picture all the cast and crew seem to be posing for in that first shot, would you? ;) There was a bunch of DVD special features footage of the cast posing for photo sessions in costume, and none of the shots were ever released!

Thanks, Bob! Love seeing these show up in the Twitter feed (and then here on TrekMovie, of course.)

(clarification – I meant group photo sessions, not the character photos that made it onto posters and covers and stuff.)

Hey Anthony, what was that thing you stated a few days ago about doing some live stream/feed for something? I don’t remember if it was related to first production pics or what.

Love the pics, esp. any with a glimpse of my guy Karl Urban. And I look forward to hopefully seeing some new ones…but I need to add…if I had known Bob Orci was so hot, I would have followed him a long time ago. LOL ;-)

To Mike B., I assume it’ll be with the next James Bond film, Skyfall. It was like that in 2008, so I assume they’ll take the same route.

@46 – lol, Bob actually looks a little bit like Karl sometimes. I noticed in that picture he tweeted to somebody’s dad the other day…I think it was the McCoy-style side part…

Thanks so much, Mr. Orci. You made our day. Keep being cool.

Thanks much, Bob. Do you really want to up your twitter count? Not sure why that would be or if the reference was a joke. I don’t see the point in twitter, but if it helps… I’ll start looking for photos and doing my part to support your success and improve your twit portfolio:)

You clearly squeeze more life into a day and more time out of one than your average man. You deserve your success. Now go out there and make a movie the masses will love and the Trekkies/ers will cherish.