Star Trek’s Simon Pegg is a big fan of comics publisher 2000 AD and so yesterday he decided to send them a special birthday greeting. He did this in the form of a video he shot with the help of Star Trek’s Karl Urban, and it gives us our first (spoiler-free) glimpse from the sequel set. Check it out below.

We are still waiting for Bob Orci to get the go-ahead to post some pictures from the sequel production, but so for now you can try to find something to glean from this video from Simon Pegg (featuring Karl Urban), shot on the Star Trek set at Sony Studios.

What can we see?

Well in the video both Pegg and Urban are wearing the Bad Robot-issued hooded coats which are meant to hide their costumes, even when walking around the lot. But if you look closely you can get hints of the costumes. Karl appears to be wearing his standard blue McCoy tunic, whereas Pegg is not wearing his standard red tunic, but something with a grey collar. Karl can be seen with his standard blue uniform shirt Pegg doesn’t appear to be wearing his red uniform, but something with a grey collar

Purely speculating, but it is possible that Pegg is wearing one of the grey uniforms (or a variant), worn by officers seen at Starfleet Academy in the 2009 Star Trek movie. Of course, just like with the 2009 film, we will likely see characters in various different costumes for the sequel. 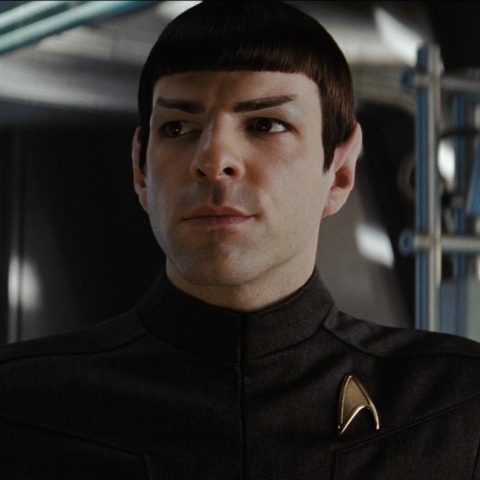 Can you spot anything? Sound off below?

Ah… so carefully shot as to avoid us seeing the actual set. Clever, guys!

At any rate, I’m just happy it’s being made! Loved Urban’s Dredd/Bat-voice.
;-D

Is it me or is there something odd about Simon Pegg’s left eye?

Pegg has had his hair colored dark brown.

Let the rampant speculation begin! LOL. I genuinely wonder why Pegg ain’t wearing his red tunic. Maybe he’s wearing the grey uniform that the officers wore while on Earth (Spock wore it during the assembly scene in ST2009).

I couldn’t really tell, but was Pegg’s hair colored to be kinda brown-ish like in the 2009 movie? It looks like his regular hair color. I really don’t care what his hair color is, just an observation.

i could have sworn i heard somebody yelling “kahn” in the background. you heard it too, right?

7. OK: so if it’s an Earth-stationed Starfleet uniform, why would they be on Earth again? Is Earth threatened again? Maybe the crew splits up! I mean, as in they go on seperate paths. Sort of like Empire Strikes Back.

Maybe it is working Uniform for Chief Engineer, kind like what Scotty wore in Star Trek II

I hope they’re not wearing Nikes and sleeping in bunk beds.
Kinda creepy to have em all in the same windbreakers.

For one or more of the characters to be back on Earth for some scene in this movie would not surprise me. Certainly wouldn’t sugest to me that the crew split up.

Also, the uniform could be mission specific. Like the jump suits they wore when they space jumped to the platform in 2009 Trek.

I was thinking maybe we aren’t getting that much news from the set because we already know what the ships, uniforms and pretty much how the Abrams Trek Universe looks from the first reboot movie. Wouldn’t the only things left would be who the villain is, what characters the supporting actors are playing and what the plot is?

The left eye looks as if it’s made up to seem as if it is healing from an impact of some kind. A fight?

His eye does seem to have some bruising near his check bone. Maybe just the lighting, but could be makeup.

#16 I would still love seeing some spy photos or something.

Like when we got shots from the Academy scenes. Seems like there would be less reason NOT to show those type things since letting us know what the uniforms looks like is not a spoiler anymore. You know what I’m saying? In the 2009 film they went out of their way to hide the uniforms for a long time. I don’t see any point in that now.

Showing us some set pics, like those from the Academy scenes in 2009, would not give away any secrets, but would be cool to fans like us.

Like everyone looking at that big blue screen….. how did that help you in any way imagine the actual scene in the movie when they added the CGI? It didn’t. So there would be no harm in doing the same thing now.

16: good point. But, then why all the secrecy? Why bother wearing the black jackets?

Look up Benedict Cumberbatch’s look at the Golden Globes – definite moustache being grown with a possible beard – all black = Khan? Will see what he looks like at the Oscars – hoping that they show him on the red carpet – if its red hair, then we are out of luck by the way – its actually his natural colour! It must be said that am hoping for medium length black hair but think we might have to wait until after Hobbit for that…….Sherlock! We are all counting the days until we find out how he survived the jump!

There has got to be someone out there with a cell phone that can take some spy photos!!!!

Maybe all the filming so far has been in studio and they haven’t done any on-location shooting yet. That would at least explain why there are no spy photos or leaks about people discovering their location shoots like last time.

My guess is it’s a dress uniform, and that this more formal uniform is what officers assigned to the Academy wear on a day to day basis.

#23 True. There could be a million different reasons why he would be wearing a dress uniform.

We all know that in most of the Trek movies the characters wore more than one uniform in the film, so it’s nearly pointless to try to speculate why.

But it is fun to see something!!

By the way Anthony…. has there been any hint of a viral website for the movie yet? Wasn’t there for the 2009 film? JJ seems to always have one of those for his projects.

ahaha, how did this get past boborci ? Is someone gonna get super pist ? lol

Simon Pegg has a bruised eye. Which is interesting.

Hmmm. Flashback scenes revealing why Scotty had been sent to Delta Vega for six months? Punch-up disagreement at the Academy, over his theory about transporting across great distances?

Although the collar’s grey, it looks a bit similar to the collar of the uniforms from the Wrath of Khan. A puffy turtle neck type. Lordy, I must be deamin’.

Does look similar to Spocks starfleet grey uniform… I guess both Spock and Scotty are the most longest serving Starfleet officers among the crew (albeit one of them was marooned on an ice planet).

Instructor uniform from the Academy on Earth perhaps?

Anyone notice the background behind pegg ..? Something there vaugely resembles the take up reel on an old school projector…also the walls behind pegg resemble the walls inside the storage containers that khan uses for a dwelling in STII twok.

They find the Botany Bay, but they don’t save Khan in time when his sleep chamber malfunctions, so he dies.

Cumberbatch is playing one of the other Augments on board and it’s all downhill from there.

And, couldn’t Pegg just be wearing, say, a zip up sweatshirt under there? I know, I’m no fun.

I wish I was a better speculator, in every sense.

I agree with AJ. Simon Pegg’s eye looks like Make up to me. Maybe he is in Sickbay and that’s why he is in a different uniform or a Medical gown, and also why he is on the set with Dr. McCoy/Karl Urban.

could be like the radiation suit from the early films?

I’m probably alone in this but the first time I liked the uniforms in STAR TREK was in THE WRATH OF KHAN.

Never cared for the TOS outfits. Or the TNG ones for that matter, until FIRST CONTACT.

yes the walls behind them are just the inside of the very large soundstage at Sony…clearly he made sure the camera was not pointed to any of the sets constructed inside. I am sure if the camera turned just to the left you would see some cool stuff, but they didnt’

WE NEED A SOUND GUY TO EXTRACT THE AUDIO OF THE GIRL TALKING IN THE BACKGROUND. PERHAPS THERES A BIT THERE?

To bad Anthony. Hey Bob Orci. We all know you are Lurking around. So please. Decloak and gives us something about the new movie. Please!.

If that was Cumberbatch, he looked as if he was wearing Starfleet regulation sideburns.

Serious as a heart attack.

I’m heading to Las Vegas for the 2012 Convention in August. I’m rather disappointed that (so far at least) there are no NEW Trek actors scheduled to attend.

Is it me, or is there a red banner hanging over on the far right side of the screen behind McKoy by what looks like a door? Also, two people walk behind Pegg in black coats can’t see too much on them but it looks like one guys walks buy with a white doctors or lab outfit. Maybe this is our jump start on the viral boat? I assume the video had to be sanctioned, @BobORCI any word?

#43 – I saw the sideburns too! Definitely Starfleet regulation…

Perhaps the clothing Pegg is wearing is the black/grey body suit that the Borg wear. The make up around his eye is where the Borg eyepiece gets glued on.

ok so the red banner I was thinking of actually looks more like a red ladder so ignore that, but I swear by the rest. The one chick with the robe on that walks by has a white coller, maybe an admirals collar similar to Pikes at the end of ST09? She looks young for an Admiral but who knows…

That woman’s shoes appear to be white, too. I was thinking it might be a nurse – the nurses in XI had short white boots.

And she has blond hair. Chapel!?

Hey, good thinking! Very well might be! And that would go along with Scotty having a bruised eye, he’s down in sick bay getting all fixed up by the doc.

Hey, it’s my birthday, too. How about that….