Now that the epic eight-issue Next Generation/Doctor Who mini-series from IDW Publishing has concluded, TrekMovie presents a Star Trek Doctor Who Christmas Special, briefly reviewing a completely random and entirely subjective literary and art history of the intersections of the Trek and Who franchises. Read on about some old (and not so old) Trek/Who stuff after the break…

The Doctor and the Enterprise
Written by Jean Airey, published by Jean Airey and Pyrodonian Renegades, R&R #13, 1981

Earlier this year, after picking up the first issue of Star Trek: The Next Generation/Doctor Who: Assimilation2 from IDW Publishing. I decided to take a trip back in time and read what is probably the first Star Trek/Doctor Who crossover, a short novel written by Jean Airey, published in a 1981 zine. The Doctor and the Enterprise introduces the Fourth Doctor (played by Tom Baker in the long-running BBC television series) to Kirk, Spock, McCoy and the crew of the original series. The Enterprise finds itself in the Doctor’s universe, needing his help to get back home. Kirk is suspicious of the Doctor’s motives but is eventually won over after a series of adventures.

Airey tells an interesting tale, but her novel is mostly a character study of Kirk, Spock and the Doctor. I liked the story, but it never really goes anywhere, meandering a bit, just long enough for Kirk to get over his mistrust of the Doctor and part friends. Hardcore Trekkies and Whovians curious about the first crossover of these two fabled franchises might get a kick out of the story, but it’s not going to rock anyone’s world.

There are many different printed editions of this novel and the text of the story is archived in many locations out on the intertubes. Airey’s story was serialized in the first six issues of the Star Trek fanzine, Enterprise. Some editions were altered by the publishers without the author’s permission, sanitizing explicit references to the two franchises. More recently, a re-imagined version appeared in the forums at StarTrek.com with a mock cover based on the design of Doctor Who novels being published at the time. A sampling of the many editions of The Doctor and the Enterprise are appended below for your amusement.

You can read the original version of Airey’s The Doctor and the Enterprise online at SciRev.net ( Part 1 Part 2 Part 3 Part 4 ). More information about this novel can be found at Fanlore and TARDIS Index File R&R #13 contains the first appearance of Jean Airey’s novel, The Doctor and The Enterprise 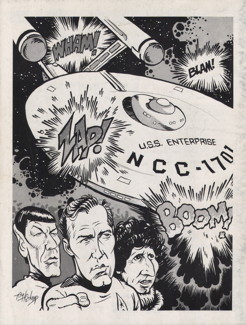 The Doctor and The Enterprise. New Media editions with cover art by Tom Holtkamp The Doctor and The Enterprise, the severely edited 1989 Pioneer edition with cover art by Tom Holtkamp and interior art by Mahlon Fawcett; and a Bob April’s wishful cover mockup of a modern edition

The Doctor and the Enterprise in zines and books

Jean Airey may be the first and best known fan author writing Trek/Who fiction, but she isn’t alone. Many zines devoted to television series fan fiction have featured the Doctor and the crew of the Enterprise. Airey wrote a followup novella for adult readers titled The Lieutenant and the Doctor, published in The Blue Guardian #13, about the young and attractive female officer assigned as liaison to the Doctor during the events of The Doctor and the Enterprise. A good website to explore for Trek/Who fan fiction is Fanlore. If you prefer scholarly studies to gen/het/slash fan fiction, Star Trek and Doctor Who fans go under the social studies microscope in Science Fiction Audiences by John Tulloch and Henry Jenkins. A few more covers are displayed below. A couple of the zines that published Trek/Who crossover stories The Doctor and the Enterprise in comics

For a time, from late 1976 to mid 1978, Doctor Who comic strips and Gold Key Star Trek comics were reprinted side-by-side, in black & white, in a weekly British publication, Mighty TV Comic. Much later, in 1990, a very forgettable Trek/Who parody titled Dr. Whom Meets Star Wreck was published by Imagi-Mation Graphics. The comic featured computer-generated art of Doctor Who with original and next generation crews. Until IDW Publishing stepped up to the plate this year, comic books weren’t a friendly medium for Trek/Who crossovers. However, Doctor Who has a long history in comics and I recommend the Doctor Who Comic Strip Index if you’re interested. One final note about IDW’s Trek/Who comics. Although the recent mini-series has concluded, three more variant editions of the eighth and final issue of Star Trek: The Next Generation/Doctor Who: Assimilation2 will be published next year by Dynamic Forces. Ordering information about the first Dynamic Forces variant is available now. The Doctor and the Enterprise in professional art

Last, but not least, here are a few examples of professional art featuring Star Trek and Doctor Who. The earliest example I was able to find is the 1972 cover art for an album of television theme music, illustrated by John Peter Britton. The artist featured Spock, Kirk and the Enterprise prominently, pushing the Doctor up into a corner, even though most of the theme music was for British television shows. Other interesting art I found include Kirk and the Doctor in the style of animated Star Trek by Jon Douglas, an incredible drawing by Mike Mayhew, colored by Rainier Beredo, of a Trek/Who battle featuring Cybermen, Daleks and Klingons, and a piece by Ulises Farinas that includes practically every science-fictional movie and television character ever conceived. Follow the Mayhew, Baredo and Farinas links for higher resolution versions of their art. Star Trek vs. Doctor Who, composition of original images from TAS and the animated Doctor Who series The Infinite Quest by Jon Douglas, 2010 Ok, that’s all folks! I really only touched the surface of this topic. If you know of other interesting Trek/Who fiction and art, please add a link in the comments. Happy holidays and keep on trekkin’ and doing whatever you Who folks do.

Fascinating!
I fell in love with Doctor Who this past summer and I never expected to love another franchise as much as Star Trek, so seeing all of this together is brilliant! I especially enjoyed the Mike Mayhew/Rain Beredo Wizard Magazine art!

Tanner Waterbury (I AM NOT A NUGGET!)

Y’know….this could be published on the fanfiction.net website. I frequent that site quite often, and I do usually read some DW/ST crossover stories.

I really love the DW-ST TMP Style of the cover book. All drawings are great by their creators. I give them more than a 10. “To each its own talents” as Mr. Spock would say in Star Trek II.

But truth to tell, I fell in love with the DW-ST crossover in 2009 when Paramount PIctures cancelled the Christmas date of Star Trek 90210 (and moved to May) and I (like any other Star Trek fan) were ticked. But who came to the rescue?

Kelvington and Spockboy. They saved us from disappointment and made their own Doctor Who-Star Trek Christmas. “Trekking Through Time”. I still watch it when I get a chance but on Christmas week, I watch the movie.

So, when you have time, watch “Trekking Through Time” and please don’t forget: Hug your family and kids, say how much you love them and appreciate life. Do this everyday. Take care and thank you for your time. Merry Christmas and Happy New Year to all at Trekmovie.com and you.

Wow, blast from the past! Great piece Mark and very complete. I was the co-founder of The Prydonian Renegades and co-editor of the DW zine Zeta Minor. Jean was the wonderful person who introduced me to fandom in general in 1979, R&R#13 the first fanzine I ever saw, and The Doctor and the Enterprise the first fanfic I ever read. I was also the (young!) artist behind that orange cover above, HA! Wow, over 30 years. “How do you feel, Jim?” “Old.”

I am a liffelong fan of both Star Trek and Doctor Who, People may enjoy this:

Here is a series of about 30/40 stories set through the Doctor’s lives and various eras of Trek, all by PAUL GADZIKOWSKI. Must have discovere it about 12 years ago now?

Also Superman, Buffy, Highlander and others are thrown in. They clearly act as if Doctor Who and Star Trek are one and the same universe, using some Who lore to explain Trek and vice-versa. Some are prose, some are comic strips

– Prime Contact – The First Doctor, Susan, Ian and Barbara arrive on the Enterprise with Pike as Captain, as they first contact the Klingons (written long before Enterprise)
– Too Many Cooks? – The Third Doctor, UNIT, The TOS crew, Gary Seven and Questor
– Tranformations – an examination of Saavik’s origins
– Historical Revision – “I started wondering when I saw STAR TREK VI: THE UNDISCOVERED COUNTRY why it is that the Organians were never seen again after Errand of Mercy. I found the answer in DOCTOR WHO. This is set just after Trial of a Time Lord and just after STAR TREK IV: THE VOYAGE HOME.”
– Conpiracy of the Daleks – Comic story with the Daleks, TNG Crew, 7 and Ace
– The Sword of Eterniy – bringing HIGHLANDER into the equation – Another comic where Picard introduces the Seventh Doctor o an old and dear friend
– Everything in Threes – The Eighth Doctor and Buffy the Vampire Slayer on the Enterprise-E
– No Lesser Evil – Had to happen!!!! Voyager comes aross warring Borg vs. The Daleks

I admit I was a bit disappointed by the Assimilation2 comic overall despite the early punch of seeing the Eleventh Doctor and Picard interacting. Its a pity the Nation Estate are so so fussy about where they let the Daleks go.

No Doctor here, but this fan audio series ‘Star Trek: The Section 31 Files has as their third season finale the Daleks as antagonists, again pitted against the Borg: http://www.darkerprojects.com/section31.php

I would like to once more name-drop Kelvington’s Trek Through Time’, despite being a comedy spoof we get to see things like David Tennant and Leonard Nimoy share a scene. He’s working on The Five Doctors 50th Anniversary Edition – modifying it to add Tom Baker to the mix – not just a cameo.

My very very favourite Trek/Who crossover story is Alternation by Chris Heffernan. This features the Eighth Doctor on DS9 during Season 6, and while reading I could properly visualise what was going on very clearly in my head: http://www.geocities.ws/cptzaphod/alternation.html

So if you look at the decent fan fiction then you realise that the good Doctor is no stranger to the Star Trek universe.

I have to say that I have been enjoying the Star Trek/Dr. Who crossover comic. I just picked up the latest issue last week.

Does anyone remember this video mash up from a few years ago? I always though that it would be so cool to have an episode of Dr. Who or TNG that features an episode or two together.

Entertaining holiday-reading for this fan of the franchises…

Re: The image with the Tenth Doctor and TAS Kirk…

The Doctor part is taken from an animated Doctor Who adventure called “The Infinite Quest” that aired as a serial over 13 weeks in 2008 as part of “Totally Doctor Who!” on BBC One.