A lot of attention is paid to the big cons like this weekend’s San Diego Comic-Con, next weekend’s Las Vegas Star Trek Con, Labor Day Weekend’s Dragon Con in Atlanta and others. But there are other ‘unconventional’ ways to experience live Star Trek at events around the country over the coming weeks in Seattle, Indianapolis, San Francisco and Louisville. See below for details.

TrekMovie recently reported on the Star Trek Live concert series touring the country and gave you a breakdown on all the Trek-related happenings at San Diego Comic Con this weekend. Last week we also previewed Destination Star Trek London and Chicago Comic-Con, and next week will will prep you for the big Las Vegas Star Trek con. But there are some other Star Trek events that aren’t concerts or conventions happening around the country. See below for some of the more interesting live Treks around the USA.

This summer the Hello Earth acting group has chosen the TOS episode "Mirror, Mirror" for their fourth annual Outdoor Trek shows.  The group performs the entire episode live (and for free) with two shows each weekend at Blanche Lavizzo Park (Performances are at 7pm on Saturdays and 2pm on Sundays, including July 26, 27, and August 2 and 3). For the shows on August 2nd & 3rd Dr. Marc Okrand (inventor of the Klingon launguage). The Hello Earth crew invite you to "join our intrepid crew as they encounter bearded Spock and agonizers! (Don’t worry, it’s still safe for kids!) Bring a picnic! Bring a costume! Bring your evil twins!" 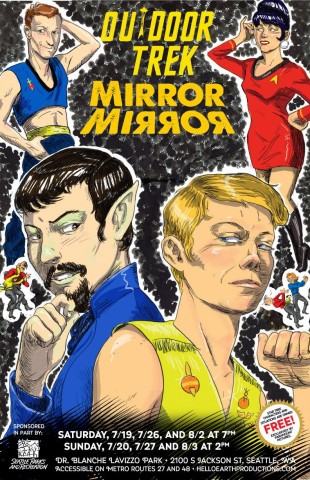 The officially licensed Star Trek beer Klingon Warnog is making its USA debut next week (in selected liquor stores and bars in Indiana and Washington state). To celebrate this event brewers The Federation of Beer is holding a number of ‘First Contact: Klingon Warnog’ events over the next year. The first will be this Saturday in Evansville and Indianapolis, Indiana. Star Trek band 5-Year Mission will be playing at the Indianapolis event and attendees of the Evansville event get free passes to see Tiffany (remember her from the 80’s?).

This summer the Alley Theater Company is premiering their new production of  "Star Trek: a Parody" or "The Original, Deep Space, Next Voyager, Generation, Enterprise 9: The Officially Unauthorized Parody." The official description is: "The crew of the USS Golden Gate takes you into space for fully improvised episodes in the style of the original series. Every show is inspired by audience suggestions and always reaches warp speed." If you are looking for something a bit more risqué, then Seattle’s  neo-vaudeville company Songbird & Raven will be presenting "Star Trek: The Sexed Generation," a Star Trek burlesque show. The show is part of’Seattle’s Summer of Nerdlesque.’ According to the official announcement the show is a "salacious and reverent celebration of Trekkie canon that combines artful striptease with the colorful characters and quirks of the final frontier.

You may be wondering where is Portland’s ‘Trek in the Park‘ which TrekMovie has reported on for the last few years. Well we checked in with Atomic Arts who put on the shows in Portland, OR and they tell us that last year was their final Star Trek performance noting that after doing live Star Trek in Portland parks from 2009-2013 they had "completed their 5-year mission."

If we missed any other (non-convention) Star Trek event in your local area, let us know at tips@trekmovie.com.

I went to the last 3 Star Trek in the Park in Portland and enjoyed them all. The last one was “The Trouble with Tribbles”… and the audience threw Tribbles at the actors that the made to help out the the productons. It was a a great day and event. I really miss it. Wish they were still doing it. Great event. LLAP

“where no booty has gone before”

Send me a vid.

“Mirror, Mirror” in Seattle is wonderful – hilarious, reverent, campy (and tuneful) all at once. Marlena has to be seen to be believed.