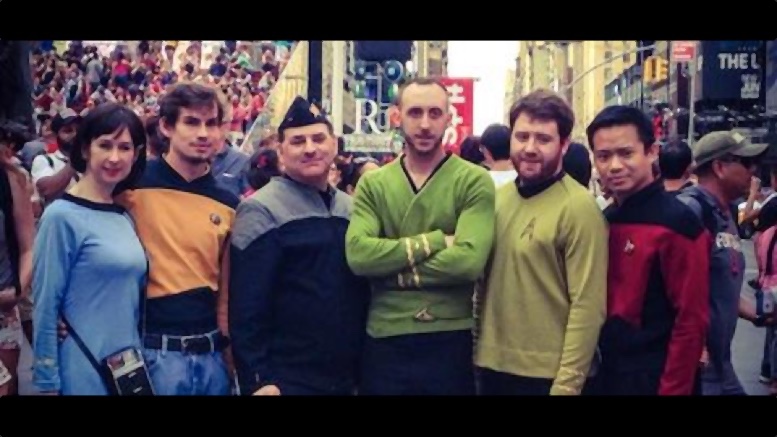 The big Las Vegas Star Trek convention is officially over, the excitement (and hangover) has worn off, and we find ourselves back in our normal lives once again. This is the time when the Post-Con Blues hit hard. But, do you have to wait an entire year to recoup that amazing feeling of friendship, geekery, and belonging? Perhaps not. Michael Nguyen decided to beat the post-con blues by gathering up Trekkies in his local community to build a mini Star Trek convention of his own, or as he calls it, an away team.

Climbing well-worn damp steps I emerged from the underground into the middle of thousands of humanoids speaking dozens of languages, some I couldn’t recognize. I had two science officers and two command division officers with me. Was this Farpoint? Risa? Romulus? Try New York City!

Two years ago I went to my first Star Trek Las Vegas Convention, and to say that I had an incredible time would be a gross understatement. I befriended dozens upon dozens of like-minded people, costumed everyday, lived the “Starfleet” life, and enjoyed the company of new friends who seemed more like long lost ones. I returned home from a great trip, and eventually the post-con blues set in. I couldn’t imagine waiting a whole year to gather again in Trekkie fellowship! Even local cons every few months weren’t enough to quench my thirst. I decided to start a Facebook group to gather up Trekkie friends in the area. Our first meet-up was just a few folks, but month to month our numbers grew. Friends told their friends, I met more Trekkies at cons, and eventually our “away team” had about two shifts worth of bridge crews! On one epic occasion we coordinated with Trekkies in California, New York, Texas, and Utah to gather in our respective cities in costume on the same night. Once we were all assembled, we used Skype and FaceTime to bring distant Trekkies together like a true subspace communiqué!

Our away teams became our own way to keep the spirit of the con alive. People love seeing us in the city and often ask for pictures, raise their hand in the Vulcan sign, and share their favorite Trek memories with us. People’s responses have been incredibly positive because we remind them of something they enjoy! Our away team started small, but grew and grew!

It all started with the NYC Away Team, but quickly, Trekkies in other areas wanted to join in. I enlisted local support to help start away teams in the San Francisco Bay Area, Seattle, Colorado, Utah, and more. And, Star Trek away teams are still growing because they are a simple thing that anyone can organize to rekindle the convention spirit back home. My experiences have taught me that anyone can make a Star Trek away team. It doesn’t have to be complicated; it involves nothing more than picking an Applebee’s or other establishment, making a Facebook event and inviting people. If you’re looking to make your own away team, the best thing you can do is: be patient. It takes time to build up attendees, but in the end you’ll have a local crew of fans who love Star Trek, costumes and celebrating Trek as much as you do! We also do trivia contests, karaoke, and fun raffles with prizes that range from Star Trek inspired art to old Next Generation figures. The key to forming your own away team is “taking charge.” You’ve to move from a mentality of “wishing” that you could gather Trekkies together to a mentality where you’ve “decided” to get Trekkies together. Start with a few, document your fun outings in costume and share with friends. Gathering Trekkies for a group picture at a local con can be a great way to meet more local fans and build your team. Eventually you’ll be beaming down into more fun to tide you over till the next con!

How does one find an away team?

This is an well known idea to the german fans. Since the early 90´s there are many monthly gatherings of trek-fans in nearly every bigger city in germany. As they meet for dinner and to have fun, this is called “Trekdinner”.
The Trekdinner in my hometown is organized by me for over 17 years.

DC – check on Facebook to see if any are already near you. If not, start your own! As Michael says, anyone can do it!

Some fans also call them “Meet-Ups” but I don’t think they wear costumes.

” Some fans also call them “Meet-Ups” but I don’t think they wear costumes.” — Marja

I don’t intend to offend your real world sensibilities, but if they are forming “away teams” shouldn’t that be “uniforms”?

Mike is the KING of the Away Mission. He is one of the nicest and funniest guys you will ever drink with. I highly recommend an Away Mission!

Our ship the uss centaur does charity work. monthly meetups, episode screenings, parties and we do things both in and out of uniform!
so its good to hook up with some folks or start your own group!

San Diego Away Team is getting ready for our first mission! Check us out at https://www.facebook.com/groups/SDAwayTeam/