There is more sad news today as it has been reported that actress Arlene Martel has passed away. Famous for her role as T’Pring in the original Star Trek, Martel was 78. More details plus condolences from some Trek luminaries below.

Today the world of Star Trek mourns another loss with the passing of actress Arlene Martel. News of her passing came earlier today via Facebook from "These are the Voyages" author Marc Cushman, who had recently appeared with Martel at an event in Santa Monica on June 28th – which was her last public appearance. Martel was scheduled to appear at the recent Star Trek convention in Las Vegas, but was hospitalized at the time. Cushman tells TrekMovie that Martel passed away during the night at West Hills Hospital, due to complications after heart surgery.

Star Trek fans most remember Martel for her role as Spock’s bonded mate from the episode "Amok Time." The role was actually the third she had auditioned for on Star Trek, previously she came close to being cast as Elizabeth Dehner for "Where No Man Has Gone Before" and Sylvia in "Catspaw." The actress returned to Star Trek in 2007 to play a Vulcan Priestess in the independent production of Star Trek: Of Gods and Men. Martel’s acting career spanned decades starting in 1958, with dozens of guest roles on TV series, including The Twilight Zone, The Outer Limits, My Favorite Martian, Bewitched, Columbo, Mannix, Rockford Files, Battlestar Galactica and many others. She had a recurring role in Hogan’s Heroes playing the French resistance fighter Tiger Lily 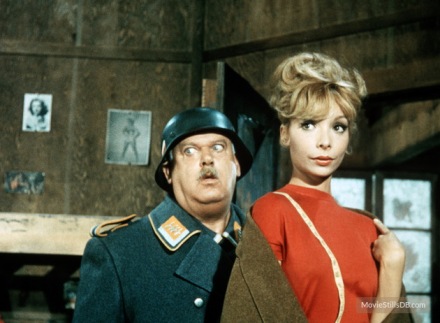 Condolences for Martel from Trek luminaries, including those who worked with her, are already appearing in social media. Here are a few…

Parted from us but never parted…RIP Amok Time's Arlene Martel.

Arlene Martel, aka TOS' "T'Pring," has passed away. She was a lovely woman. I wish there was no room for one more, honey.

RIP, Arlene Martel. Here's what she said about how acting in TZ's "Twenty-Two" affected her: http://t.co/D4QkW2mIne pic.twitter.com/DcUp78wQVn

The thoughts TrekMovie staff are with Martel’s friends and family at this difficult time.

I never realized that was her in Hogan’s Heros. She was great in the role.

Yours is not overshadowed by the likes of Williams or Bacall… they were greats, yes – but you were no less in our eyes. Find peace and happiness and know that you’ve always been appreciated here.

One of the most iconic guest roles in all of Trek, and she made it her own to the extent that it’s almost impossible to imagine anyone else playing it. The player is gone, but the music goes on.

(And she was equally awesome as Consuelo Lopez in “Demon,” too.)

Forever part of the Star Trek canon with what she portrayed in one episode. A role that will always be hers. Rest in peace.

I knew because I first became aware of her from Ellison’s OUTER LIMITS:Demon with a Glass hand.

I was smitten. My heart hangs heavy with hers and Robin’s passings.

Robin Williams, Lauren Bacall and Arlene Martel. All in the span of two days. This week is starting out depressing. :(

Gosh. Well, they do say that things happen in three’s.

RIP Arlene Martel.
(I can’t believe how much she looks like my own aunt in the picture showing her later in life. I did a bit of double-take when I first saw that picture.)

Yeah, after Williams and then hearing about Bacall my friend Linda and I were wondering who would be #3.

The “rule of three” seems to be in force. Wow, Williams, Bacall and now Arlene Martel! :-( Another shock to me! Very sorry to learn of this and my condolences to friends and family of Arlene. Wow…:-(

RIP Arlene. I met her in the late 70s at a Trek convention in New Orleans. A very gracious and unassuming lady. I was just a kid, and I wish I could have talked with her at length.

It is so hard seeing beauties of my youth grow old and die.
This is another reminder to live well while it lasts.

Thank you, Arlene Martel for a memorable moment I will always carry.

Arlene Martel lives forever in our hearts as T’Pring! =)

Wow. Sad to hear. Loved Arlene. Remember reading not too long ago she still dreamed of winning an Oscar. Was waiting for that special role. Believed she could still. I would have hired her. Sad.

An incredible beauty and an indelible memory in our Star Trek collective consciousness. She was ethereal.

“Parted from us yet never parting”

Indeed Marja, so long to a true, true beauty as well the very memorable and challenging adversary to Spock in the game of Vulcan matrimony.

And wasn’t Arlene the only women to ever outwit Spock?

That Mr SciFi blogpost was great. I really appreciated that. Will have to look him up now.

Very sad to read this. While T’Pring was a memorable character, I’ll also always remember her from the Outer Limits episode Demon With a Glass Hand.

“You have become much known among our people, Spock. Almost a legend. And as the years went by, I came to know that I did not want to be the consort of a legend. But by the laws of our people, I could only divorce you by the kal-if-fee. There was also Stonn, who wanted very much to be my consort, and I wanted him. If your Captain were victor, he would not want me, and so I would have Stonn. If you were victor you would free me because I had dared to challenge, and again I would have Stonn. But if you did not free me, it would be the same. For you would be gone, and I would have your name and your property, and Stonn would still be there.”

Very sad. T’Pring has left us.

She was also on CBS soap Guiding Light as Alexandra Spaulding my mom’s favorite soap, very sad to hear RIP.