In the aftermath of the widespread awakening of virtually unstoppable psychokinetic powers among the Tomol people, Captain Atish Khatami and the crew of the starship Endeavour join with crew of the scout ship Sagittarius to prevent a dangerous relic of the powerful Shedai from getting a foothold among the stars. The TrekMovie review of “Star Trek: Seekers 2: Point of Divergence” follows the jump.

Welcome back to the planet Arethusa, home of a curious people who willingly toss themselves into a natural gas plume when they get to be around eighteen years of age (give or take). Kids, lives, occupations… all are transient in the face of the Change, a total transformation of mind and body, which, in the case of one Nimur, went way too far. Now, in the face of a growing army of the Changed, the peaceful Tomol, as well as the crews of three vessels from the stars, find themselves between two seemingly unstoppable forces – the power of Nimur and her fellow Changed, as well as the power of the long-dead Preservers, who indiscriminately target biological signatures near the Changed, as well as the very starships which are seeking to rescue the Tomol from their horrifying predicament. Genetics, tenuous relationships, and untried methods stand between the a restoration of the Tomol and their breakout on a galactic scale… and the crews of the Starships Endeavour and Sagittarius stand
square in their way.

As Dayton Ward and Kevin Dilmore join forces to collaborate on the second Seekers novel, they leave no room for breath as one transitions from David Mack’s inaugural installment, “Second Nature”. Where Mack’s novel reads like a marathon, Ward and Dilmore demand a slower pace. There is a lot of information on offer, both regarding the situation of the Tomol and in the interplay of the crew of the Endeavour. While the Endeavour had been previously featured at different points in the Vanguard series, I, for one, never felt a real strong connection or awareness of the ship’s crew. “Point of Divergence” takes care of that problem with strength, but fully comprehending the ship’s compliment truly demands some time and thoughtfulness.

So too does the genetic struggle facing the Tomol. As Endeavour science officer Klisiewicz and CMO Leone team up, the general gist of what they are going to discovery isn’t too difficult to figure out, which works to the benefit of their narrative. As they struggle through their biological tests and bring to bear Klisiewicz’s specialized knowledge of the situation, their interactions serve to flesh out the characters that we, as readers, are hoping to get to know well enough to sustain the Seekers series for many books to come. Klisiewicz immediately establishes a unique presence as a scientist. Naturally he is curious and thorough, but a glimmer of individuality, made manifest in his openness to the occasional piece of clandestine knowledge, serve to forge a unique personality for him. Leone, however, does come across a bit flat. At times I had a hard time trying to figure out why I didn’t care for his development nearly as much; and ultimately, I have to chalk it up to him coming
across as a male Katherine Pulaski, with just the slightest hint of Leonard McCoy. As the Endeavour crew fleshes out, I do hope that his personality will evolve to fill the ship’s surgeon role in ways that, perhaps, go beyond reflecting a mashup of previous Trek doctors.

Of immediate distinction, and praiseworthily so, is the development of Atish Khatami. Though familiar with her from the Vanguard series, it is here, in “Point of Divergence” that she truly begins to own the role of starship commander. Her command style, more collegial and congenial in some respects than other skippers, is immediately refreshing, but it never lapses to the point where she is unbelievable as a commander, or where she begins aping another established leader in Trek, or sci-fi at large, for that matter. In no way does her style leave you with any doubts about her abilities or her nature, and she is immediately likeable on a personal level to boot.

Her personality exposition is driven, in part, by Kang, the wily veteran of Starfleet run-ins. Kang, while an appreciated visitor, doesn’t really fill a role that is unique to him, save his previous ‘teamwork’ with Kirk and crew. If he is to appear again in the Seekers series, I would hope for a meatier, more diversified use of him. He was truly the underutilized, and that fact is lamentable.

The major unresolved question of the novel lays firmly at the feet of the authors – will the Preservers make future appearances in the pages of the Seekers series? Perhaps I am hoping for too much, but I do hope that the Seekers Trio gives some thought down the line to revisiting this important part of Star Trek lore, and laying out their unique vision of the legacy that this mysterious people have left.

With “Point of Divergence” published, Ward, Dilmore, and Mack have taken fans back to a sector where anything is possible; and the third and fourth installments can’t come soon enough.

Coming Up Next: New Voyager Book From Beyer

The next Star Trek novel from Pocket returns to the Delta Quadrant with Kirsten Beyer’s "Star Trek: Voyager: Acts of Contrition," due out next week. Here is the blurb:

An original novel set in the universe of Star Trek: Voyager—and the sequel to the New York Times bestseller Protectors!

Admiral Kathryn Janeway has now taken command of the Full Circle Fleet. Her first mission: return to the Delta Quadrant and open diplomatic relations with the Confederacy of the Worlds of the First Quadrant, a civilization whose power rivals that of the Federation. Captain Chakotay knows that his choices could derail the potential alliance. While grateful to the Confederacy Interstellar Fleet for rescuing the Federation starships from an alien armada, Voyager’s captain cannot forget the horrors upon which the Confederacy was founded.

More troubling, it appears that several of Voyager’s old adversaries have formed a separate and unlikely pact that is determined to bring down the Confederacy at all costs. Sins of the past haunt the crew members of the Full Circle Fleet as they attempt to chart a course for the future. Will they learn much too late that some sins can never be forgiven…or forgotten?

As a side note, one notable crew member aboard the USS Endeavour is Ensign Kayla Iacovino… yes, TrekMovie’s very own science editor has been immortalized in pulp fiction, and with a fairly meaty role – one far beyond a simple cameo. Hopefully the next time the Endeavour enters scanner range, she’ll still be making the occasional visit to the bridge. 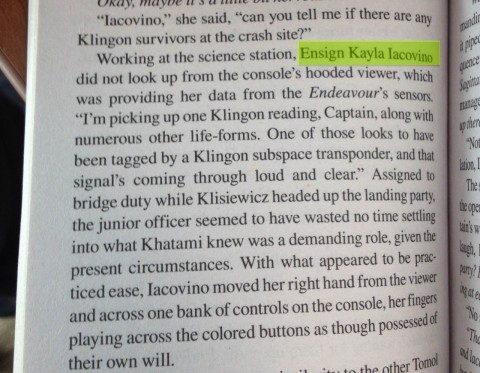 You guys at Trekmovie do a great job of keeping us well informed! Kudos!

Great review… for two great books.. The Seekers series is worth every page…

Now if only someone would tell us how to pronounce Iacovino, so we get it right as we read.

This is the best TREK novel, ever.

Of course, my appearance in it as an ensign may have colored my perception a bit…

I would presume “yah-koh-VEE-noh” going on my rusty Italiano.

Hopefully not a red shirt. ; ) I had a former workmate name a minor character after me in one of her published novels. It is kinda’ cool. And no, the character was not ‘thebiggfrogg’.

5.Joseph-I too have had the honor of having my namesake included in some of the novels written by Kevin Dilmore and Dayton Ward. But, THEY ALWAYS KILL ME! I have a signed copy on one edition with the sentiment, “To ****, you’re dying to get into one of our stories.”

Seriously, this extension of the Vanguard series is not only worthy of reading, I would like to see the entire storyline morph into a movie or television series. This is TREK at its best.