Christmas is this week, meaning there will be plenty of time with friends and loved ones to binge on episodes of Star Trek. But what might be the most appropriate for the season? Well just as we did for Halloween, we at TrekMovie have got you covered.

10. Dagger of the Mind (TOS)
The question as to whether or not humans of the future celebrate Christmas is answered in this episode, as we meet a comely young scientist who hooked up with Kirk after the “science lab Christmas party.” Best of all the character’s name is Dr. Noel. I love the image of a Christmas party for just one science lab that Kirk hears about and stumbles into, hoping to score some Saurian brandy off of his junior officers. Also it’s the first episode to feature the Vulcan mind-meld – and isn’t that what Christmas is really all about?

9. Good Shepherd (VOY)
Because Gene’s vision of the future was pretty secular-humanist, there aren’t many oblique references to religion in the whole franchise. The only Trek episode with an explicitly Christian title, this engaging episode of Voyager features Captain Janeway tending to three losers (though she more generously refers to them as “lost sheep”).

8. The Child (TNG)
OK this might be a little sacrilegious, but “The Child” does technically feature an immaculate conception as an energy being quickens Troi’s womb:

This episode is also remarkable as the first appearance of Guinan. With those crazy hats of hers, they kind of look like an angel’s halo, right?

7. Bread and Circuses (TOS)
Along the lines of Good Shepherd, “Bread and Circuses” is one of the few Trek episodes with an explicit Christian theme. Set on a Roman-like planet, Lt. Uhura teaches our Holy Trinity the difference between “sun” and “son” worshippers: Also, when it comes to Three Wise Men, could you possibly beat these guys?

6. Once More Unto The Breach (DS9)
Though the name comes from a Shakespearean call to battle, the theme of this episode – a Klingon general learning the value of forgiveness – is perfectly appropriate for Christmas time. Also if you aren’t singing this warrior chant with your egg nog or other seasonal beverage, I hope you choke on your gagh.

If this episode isn’t your speed, but you still want to get your Kling on, then try “Rightful Heir” (TNG) which features the second coming of the Klingon Messiah.

5. Death Wish (VOY)
Through the magic of the Q, Voyager is literally transformed into a Hallmark Christmas ornament – proving that while the Trek creative staff may have been cautious about the religious aspect of the holiday, the marketing folks were only too happy to capitalize on the commercial part of it.

And for anyone still looking for a gift for me, consider this a hint.

4. Silicon Avatar (TNG)
We’re stretching here, but the antagonist of this episode is described as a “giant snowflake,” and what would Christmas be without a little snow?

Actually, that snowflake is pretty beautiful. Seriously, Hallmark can we have that as an ornament next year?

3. Generations
While not one of the more celebrated entries in the film franchise, Generations features the only instance in Trek canon of people actually celebrating Christmas:

Just try not to remember that Picard is celebrating Christmas while mourning the death of his brother and nephew. Also shouldn’t his fantasy family have been the same one from The Inner Light?

2. Devil’s Due (TNG)
You probably saw this one coming. “Devil’s Due” starts with Data playing Scrooge on the holodeck in a re-creation of A Christmas Carol. As an allegory for the rest of the episode – overcoming superstition – it doesn’t really work, but it is a charming scene:

If you want more of a Judeo-Christian devil, may I suggest this entry from The Animated Series.

1. A Christmas Carol
If that Data scene is the figgy pudding for fans of both Trek and Charles Dickens, the roast beast would be the USA version starring Patrick Stewart. Magnificently produced, this is definitely worth watching (and rewatching).

Honorable Mention: Xmas Story (Futurama)
There are enough Trek jokes in Futurama to make any fan happy, so the episode Xmas Story, where the crew of Planet Express fight Robot Santa, is definitely a “must see.” 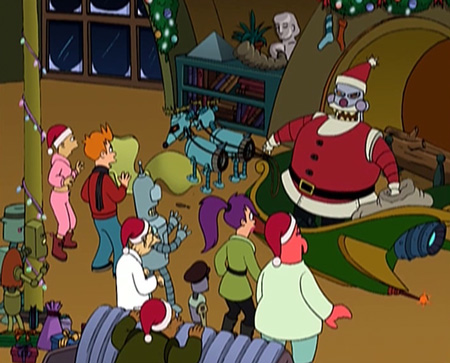 Merry Christmas, Trek fans! May all the good tidings of the season energize into your celebrations, and may you warp into a happy new year.

*Header image is a real gingerbread Enterprise made by Blackmarket Bakery in California.

UPDATE: Thanks to commenter Corylea who linked us to this imgur album of more pictures of the incredible gingerbread Enterprise and it’s pepperminty beam of destruction.

Trek the Halls, everyone!

I would also recommend Patrick Stewart’s reading of A Christmas Carol from Simon & Schuster Audio. It’s based on his award-winning one man show and is quite charming.

And Merry Christmas to you, Mr. Whitley, and to everyone at TrekMovie!

RE: 8. Aren’t all Jedi conceived this way, or just the chosen ones?

Merry Christmas to all, and to all a good Trek.

Maybe the next BR film will give us a real “Christmas” moment, with the crew celebrating Christmas together for the first time in deep space away from their families. Maybe we can finally find out what Orci contemplated for Kirk’s upbringing and whereabouts of his mom.

Surprised that Voyager’s fourth season episode “Mortal Coil” wasn’t included. It’s the Talaxian festival of Prixin and all Neelix wants to do is kill himself after learning there is no afterlife.

The Wait Is Over…
Justin Lin Will Direct ‘Star Trek 3′
http://www.slashfilm.com/justin-lin-star-trek-3-director/

The search for a Star Trek 3 director is over. Justin Lin, director of multiple Fast and Furious films as well as True Detective season 2, will helm the sci-fi sequel, tentatively set for release in 2016. He replaces Roberto Orci, who remains attached as a producer. Read more about Justin Lin Star Trek 3 below.

Troi’s child in “The Child” was a virginal birth, not an immaculate conception.

In Catholic doctrine, the immaculate conception refers to the Virgin Mary, the mother of Jesus, being conceived without the stain of original sin on her soul. But from the physical standpoint, she was conceived in the normal way.

What about the Star Trek TOS episode Friday’s Child?

Thank you for NOT repeating the blunder TV Guide did with its online site earlier this month by including item #3 at this list — which somehow STILL remains uncorrected on TV Guide’s website:
http://www.tvguide.com/PhotoGallery/Craziest-Christmas-Specials-1089530#1089535

Where did TV Guide’s “A Most Illogical Holiday” episode of “Star Trek” come from? The TV Guide “reporter” who did the research for that list went to — and got completely bamboozled by — this 10-year-old Internet satire that was used as the source (and, come one, NOBODY at TV Guide is even a casual enough of a “Trek” fan to have caught this?):
http://whatever.scalzi.com/2004/12/01/the-10-least-successful-holiday-specials-of-all-time/

More pictures of the fabulous gingerbread Enterprise made by Blackmarket Bakery can be seen at http://imgur.com/a/pvtYQ

The closest ENT had to to a “Christmas moment” was when Captain Archer stated December 25th as the date in a log entry. (The rest of the entry had nothing to do with Christmas though.)
Oh, and Phlox mentions that he once has attended a mass at St. Peter’s Square in Rome – but that might just as well have been the Easter mass.

Thanks, Corylea! Added the imgur album to the story and gave you credit for pointing us to it.

Troi was not a physical virgin when she conceived “the child”. She had had a relationship with Riker. However, the conception was not brought about through the full physical sexual union of a man and woman. Nor was it the result of artificial insemination or IVF.

I see Mary’s conception of Jesus as being like that of Troi’s. Mary was supposed to be a virgin (not ever having had relations with a man). Catholic doctrine may or may not correct as to Mary’s true spiritual status. Similar beliefs surround the status of the Buddha’s mother…bear in mind, the one who became known as the Buddha was born 500 years before the one they call Jesus.

The baby that the pregnant woman carried in Friday’s Child was conceived in the usual way. She had been recently widowed.

I’m surprised with all the discussion of Dickens, no mention was made of “All Good Things” which was essentially “A Christmas Carol”

Tisk, Tisk. Kirk did not hookup with Dr. Noel. The idea that he did was planted in his mind by Dr. Adams. Kirk clearly had a passing attraction to her, but he’s too much of a professional to hookup with one of his own underlings.