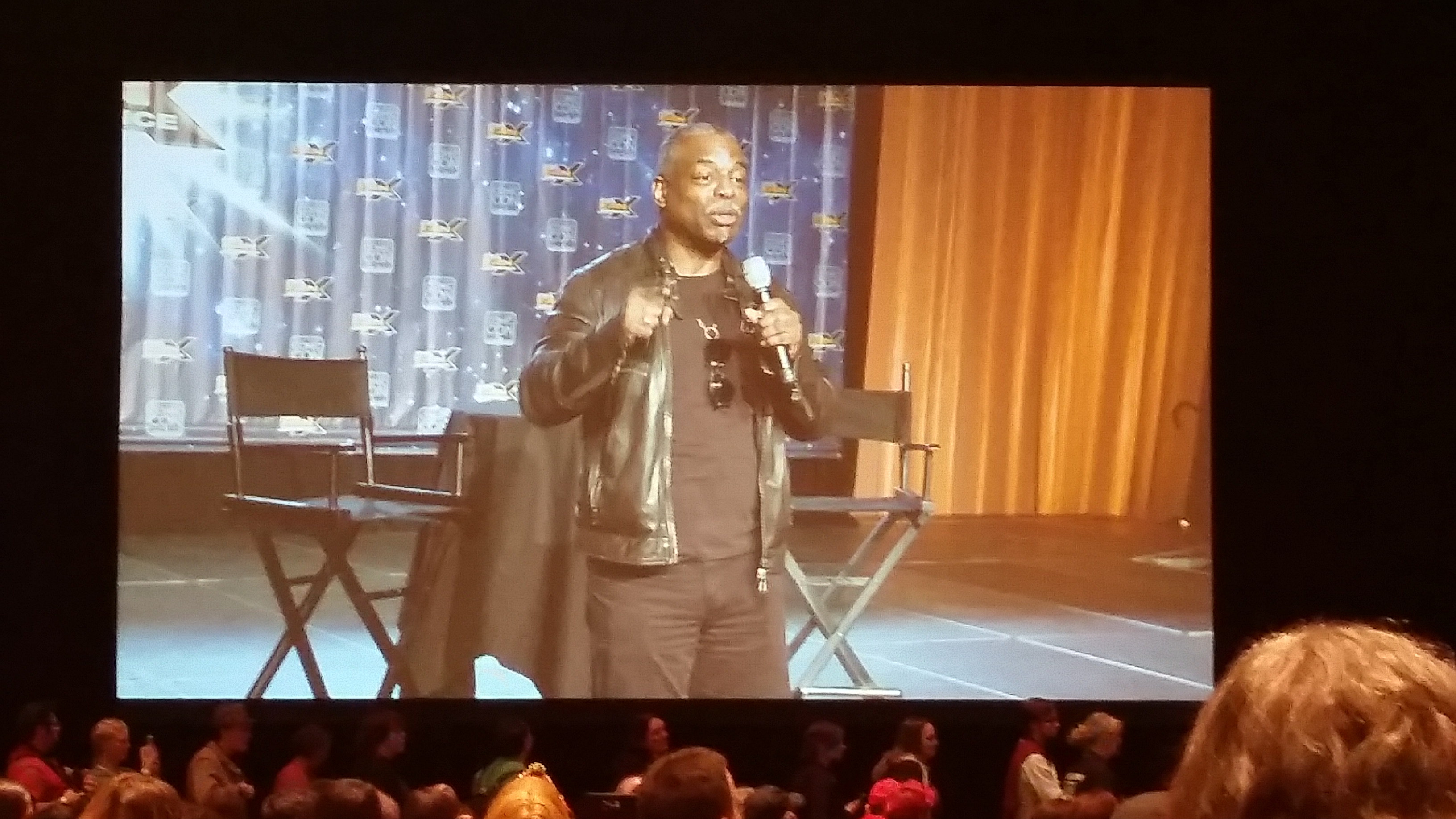 There were no problems with the warp core or the phase inducers when the Enteprise-D’s chief engineer warped into Salt Lake City, Utah, for the semi-annual Fan X convention on March 24.

The charismatic actor/producer answered an array of questions regarding his experiences with Trek, the Roots mini-series, and Reading Rainbow – including singing the theme song.

One fan asked him if he disliked wearing the VISOR, to which he effusively responded, “Yes! I hated it!” He was very grateful when Jonathan Frakes finally let him ditch the VISOR in First Contact.

Another fan asked him what he thought of the reboot series, to which he demurred that his mother taught him, “If you can’t say anything nice…” He elaborated that he admired what an exciting, energetic director JJ Abrams is but that he felt it lacked “Gene’s vision.”

When TNG first started, Burton was the only member of the cast with any real fame, thanks to his starring roles in Rainbow and Roots, where he played Kunte Kinte. Burton promoted the upcoming remake of Roots, which will air in May and June, where he is serving as co-executive producer.

George Takei also spoke at Fan X, on March 25, but – alas – this reporter was unable to attend. I’ve always felt that LeVar is a great ambassador for the franchise, in the same way that Leonard was. He really owned his character and always enjoyed those episodes where he was the focus. He also really had the tech jargon down!

A great guy with a real interest in Trek, but somewhat telling that there are not too many comments here.

Off topic, but Chris Pine has a cameo in Batman v Superman.

Loved the movie, BTW, despite what the critics say.

Agreed. I enjoyed the movie. I thought I recognized him, and then later on, reading about the I movie, I saw that it was indeed he. Suffice it to say that we will be seeing much more of him.

In other news, Robert Picardo has just posted his second installment of “Planetary Post,” accessible via Planetary.org, The Planetary Society’s official website.

BvS had flashes of good which makes all the bad so disappointing. A long, lumbering joyless car wreck of a film. However Affleck was good and Wonder Woman was good. Lex was the worst thing ever put to film.

Well thats because he wasn’t Lex Luthor, He was Lex II
But mainstream audiences not familar with the comics storylines of the 80s and 90s would have no clue about that. Eisenberg actually does a pretty good job as Lex II

Oh Lex II! that’s actually an important key bit of info. I couldn’t figure out what they had Eisenberg doing in the trailers. But I see it now that you’ve said it.

I met Burton at Calgary Expo along with the rest of the TNG cast in 2012. He was as charming & funny in real life as Geordi.

Where is the dazzling part? Same stuff he says all the time.