Whoopi Goldberg, our beloved Guinan from Star Trek: The Next Generation, made her first ever convention appearance at Star Trek Las Vegas to a packed house. She talked about how she got herself onto the show, her hats, the character of Guinan, Star Trek writers, and more. 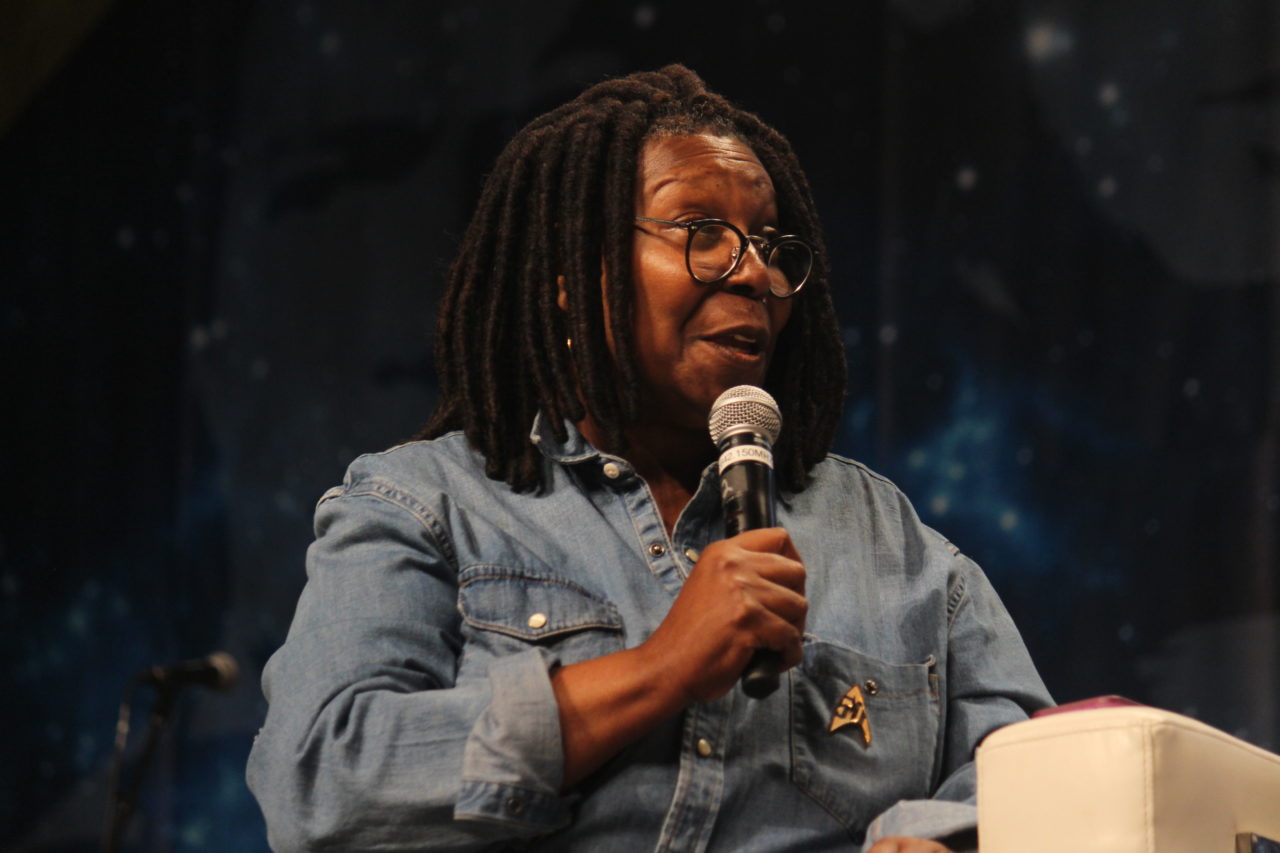 “Can I ask you a very upfront question?” Roddenberry asked, according to Goldberg. “Can I ask you why you want to be on Star Trek?”

Recounting her joy as a young woman of seeing a black woman on the bridge of the Enterprise, she responded, “Don’t you know? You don’t know that we didn’t exist anywhere in science fiction before you put Lt. Uhura on there?”

This was just one of the gems that Goldberg shared with a packed auditorium at this, her first ever convention appearance.

“When I was a kid I loved sci-fi, I loved horror movies, I loved all these things,” she elaborated. “There were lots of folks on television, you could see black folks on television, but you never saw them in the future. And until Gene Roddenberry put a beautiful black woman, who was the communications officer – she wasn’t cleaning houses.

To see her in the future in charge of communications and being as hot as a woman could be to the point where even the aliens wanted her. You’d see Spock looking at her and you knew what he was thinking,” she said to great laughter. More seriously she added, “She was integral to their being able to survive wherever they were going.”

At one point, Goldberg called for three women who were cosplaying as Guinan to come up on stage. She hugged them and chatted with them for the rest of her appearance. She took pictures with them because people “at work” (presumably The View) swore that no one would come dressed as her, and Goldberg wanted to prove them wrong. Regarding Star Trek Discovery, Goldberg said that her character – who could appear any time, any place – would be a great addition. Host Scott Mantz immediately interjected “#BringBackGuinan.”

“But not a new Guinan,” she quipped. “Because you know they will go and find a 5-year-old Guinan.”

On Ghost: She told how every black woman in Hollywood was auditioned for Ghost – except her, because producers felt her starpower would be too distracting. Eventually she worked her way into the auditioning process and recounted that Patrick Swayze wouldn’t sign on to star in the film without her.

On Yesterday’s Enterprise: About her amazing contribution as Guinan to the episode that brought back Tasha Yar, Goldberg said, “You can’t kill that woman. Every time you kill that woman she shows up somewhere else.”

On Q: “My people live in the realities of what needs to be done. He wants to mess with people. They probably dated a few millennia ago. They may have a baby. I’m not saying.”

On her hats: She loved her hats, and shared that they were supposed to look like the saucer section of the Enterprise. “They called me ‘Shuttle-head.’”

On the writers: She said TNG head writer Michael Pillar was “amazing, gracious, smart” and very easy to work with. One fan asked if she was allowed to rewrite any of her own lines: “I tried to do them like they were written. But if you want them to come from me? So be it.”

On Brent Spiner: She liked to mess with Spiner in between takes, so during one long speech she had to give, the actor pinched her. She never messed with him again.

On Picard: The hidden secret as to Picard and Guinan’s closeness, Goldberg had crafted for herself, was that at some point in the past, she gave birth to one of Picard’s ancestors. So he was her however-many-greats grandson.

On Nichelle Nichols: “She’s just a great human being and they’re really rare. So when you find them, you want to hold onto them.” The two visited behind stage before hand and sent out a picture on social media.

On what Star Trek means to her: “The thing that Star Trek never let go of was hope,” she said earnestly, to warm applause. Then quickly – ever the comedian – she added, “Bring Back Guinan.”

Thanks much for the nice write ups that you are doing of the convention for those of us who can’t be there.
It sounds like it was a great panel with Whoopi Goldberg.

Who is the guy kissing her in the photos? I was startled at first because it looks like DeForest Kelley at first glance, but obviously cannot be if these are new photos.

ATOZ the Librarian
Reply to  Just Another Salt Vampire

fwise3
Reply to  ATOZ the Librarian

I totally thought that was DeForest Kelley! James Darren… you mean the holographic crooner from DS9?? I bought his album after marathoning DS9 several years ago LOL

For us oldsters James Darren was scientist Dr. Anthony (Tony) Newman, the turtleneck wearing scientist who became the US Project Tic-Toc’s first chrononaut in Irwin Allen’s, THE TIME TUNNEL and Gidget’s object of affection, Moondoggie in the movies which sparked a film career that includes THE GUNS OF NAVARONE and DIAMOND HEAD (John Williams wrote the music, Darren sang the theme song).

I’ve always had a soft spot for Irwin Allen’s cult hit CITY BENEATH THE SEA and Darren’s bit in contributing to it.

Funny. I immediately saw DeForest Kelley at first glance too, particularly the first one!

Whew, glad someone was able to answer that question. I loved Vic Fontaine on DS9. Caught the ’60s fever of the mid-’90s [everything old is new again] and it was really fun to see James Darren and hear his swingin’ voice. Thanks for referencing “Time Tunnel” too. I only vaguely remember that series, but he was a highlight for me. Remember the trippy Op-Art tunnel in the titles? Whee!

James Darren was also in line to star in Irwin Allen’s aborted series, MAN FROM THE 25th CENTURY, with several pilot scripts that ran from 15 minutes to an hour and yet another that ran two hours. At one point it was seriously considered as a spin-off from LOST IN SPACE, where his character of “Tomo from Andro” would visit the Robinson family and, in exchange for his supper, he’d tell his story (and dissolve to the pilot episode).

In the end, MAN FROM THE 25th CENTURY was filmed as a short promo and not picked up, using concept paintings and stock shots in place of L.B.Abbott’s FX. You can find the late ’60s short promo on YouTube.*

Wow I’m shocked this was Whoopis first appearance ever. Shes such a big fan of the show and loved Guinan I just assumed she made a few appearances over the years. I really liked Guinan as a character. They played it smart with her, she was never in more than maybe a dozen episodes every year and they gave her some really cool story lines when she did get something. She was Picard’s conscious and hated Q like no other lol. I kind of regret she was never on DS9 as a cameo. Goldberg said a few times she would’ve liked to have been on an episode but they never tried to work something out for some reason.

She was amazing in Yesterday’s Enterprise

I Have loved a lot of her movies.
I remember at the Con that I went to during the last season of TNG.
A moderator at one of the panels teased that here was going to be an episode that focused on the Gunan/Picard relationship, why they’re so close.
It never happened.
I always wanted to find out more about that friendship.

That’s funny, TUP, I actually agree with you. She is mediocre at best. She fluked it with “Ghost”. No talent hack.

I always liked Guinan. The show was better with her in it.

Her self riotous BS on the View cemented for me that she sucked. She should have to wear “its not rape rape” around her neck forever.

I love both the character of Guinan and Whoopi Goldberg.
The wisdom, compassion and common sense of the lines of Guinan are so often the conscience and feeling of an episode. If only every office environment could have somebody like that!
As for Whoopi Goldberg herself, she speaks such a level of truth from her heart that sometimes I’m simply in awe of her courage. As a gay man my fantasy about Whoopi herself is that someday I can find a movie-going buddy like her in New York City. We’re the same age, like the same films and she has the most wonderful, passionate and truthful reviews of films. I hope that’s not too much information but I really want to convey how much I like her.
I hope she gets to be on Star Trek Discovery! I can’t imagine anyone who would have more clout and success if she got a recurring part on that new show.

The cool thing about Guinan is, she could be almost anywhere at any time.

Agreed. Guinan’s a fascinating character, and I’ve always found Whoopi an interesting person. She’s one of the reasons we (me and the mrs.) like GEN so much.

I’ve always thought that Guinan’s race of people had some sort of extraordinary power along the likes of Q. Remember the ‘Q Who’ episode where Guinan and Q are in ten forward and they both say ‘YOU!!’ and Guinan assumes a strike pose as if she was going to use some kind of power against Q? Unfortunately, we never get to see that side of her or learn much of her race other than the fact that she’s been married 22 times(?) and has the perceptibility of time shifting we saw in ‘Yesterday’s Enterprise.’

As a frequent watcher of ‘The View,’ I’ve rarely heard Whoopi talk a lot about her time on Trek except this season when they had NuTrek’s Simon Pegg and Zoe Saldana promoting the new Trek movie. Over the years, she has never really voiced anything strong about the show as if it were just another show she has done. Thats just my impression. Perhaps, the rapid movement of tv, with short setups and the commercials don’t give one time to say the right thing with short notice.