Cliffhangers are the bread and butter of comic books. Writers utilize them to ensure readers return for the next month’s adventure. Star Trek/Green Lantern: Stranger Worlds’ scribe Mike Johnson guaranteed a return trip with the appearance of Khan to close out issue #2. Issue 3 sees the genetically-superior maniac gain a new advantage – a red power ring. Rage makes the world go around for Khan, whether it is in the Prime or Kelvin Universes. Incidentally, rage also allows the red power ring to thrive, which makes Khan and the ring a perfect match. After being awoken at the end of issue #2 (as Atrocitus sought new followers), Khan now adds a new weapon to his arsenal; although, he does get a bit of an assist from a certain dim-witted Green Lantern in gaining access.

While the red ring would appear to make Khan almost unstoppable, there are two issues he will most certainly have to contend with – first, the ring literally replaces the heart of its wearer. Once Khan removes the ring, he dies (yet, there is no telling what the effect of his superior genetics will have on this). Second, Khan is still beholden to the same power battery issues that face the other lanterns in this Universe.

As if giving Khan the red ring was not enough, Johnson also chose to wake up all 72 members of his “family.” Star Trek: Into Darkness gave fans a pretty accurate representation how powerful Khan is by himself, now add 72 beings with identical abilities. It will be interesting to see if these family members fall in line or become a hindrance to Khan’s goals of revenge on Kirk and the Enterprise (that sounds familiar, doesn’t it?). While Khan does not need any help in the megalomaniac department, the red ring does influence its wearer. 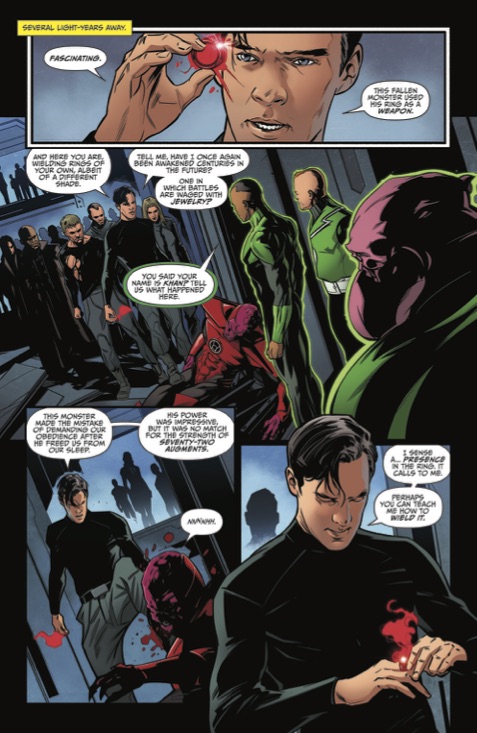 Meanwhile, Hal Jordan and Sinestro continue their quests for Oa. Jordan attempts to enlist the assistance of the Manhunters, the Guardians original appointed protectors of the galaxy. Sinestro, now the Emperor of the Klingon Empire, has escaped the Manhunters notice for the moment. Although the Enterprise crew is outmatched in terms of abilities and technology, it demonstrates their ingenuity in ending the Manhunter attack on both the ship and its guests.

Scotty, having fallen for Star Sapphire’s Carol Ferris (the purple ring holder which represents love), has a typical Simon Pegg moment when learning that these versions of “psychotic killing machines” might be earlier models. At least, that is Jordan’s hope. With so many characters to juggle, Johnson can’t afford to highlight all of them.

Artist Angel Hernandez delivers another exciting visual issue as Johnson has him portraying a ridiculous amount on each page – the Enterprise crew, Lanterns, Khan and his followers, the Manhunters and more. He illustrates a truly spectacular moment, with a major assist by colorist Matt Roberts, when the Manhunters realize Hal and Carol both possess Oan technology. Star Trek/Green Lantern: Stranger Worlds #3 is another exciting, non-stop installment for the IDW/DC Comics crossover. The Enterprise crew has appeared to be sidelined narratively during the first three issues (although that has changed a bit since being reunited with Khan), however, it seems almost a certainty they will have more of an impact on the remaining two issues. Number three is worth reading for Khan alone. While many fans faulted the character for their displeasure with Star Trek: Into Darkness, Johnson’s characterization of Khan may help alleviate those concerns.

By the way, as far as cliffhangers go, Sinestro makes a very important discovery on the final page, one that will impact how events unfold going forward. It is also essential to remember that Johnson is not limited to how he portrays or even who he lets survive in this new universe. If Sinestro captures the power battery first, all bets might be off.