This weekend marks the sixth annual Middle East Film and Comic Con, with fans from all over the region descending upon the Dubai World Trade Center to mingle, shop, cosplay, and meet their heroes. Dubai is the Las Vegas of the Middle East, so it makes sense that the largest geek convention in the region should make its way here. Headline stars for MEFCC included Anthony Mackie (Falcon in the Marvel Cinematic Universe), Liam Cunningham (Davos from Game of Thrones), and filmmaker/comic book author/actor/writer/nerd Kevin Smith (Clerks, etc.). But there was one star who beamed in from the Trek universe, Greg Grunberg, who appeared in 2009’s Star Trek and last year’s Star Trek Beyond.

Grunberg is most famous for his role in NBC’s Heroes, but his main claim to fame is his lifelong friendship with Star Trek producer J.J. Abrams, whom he has known since age four. Abrams has been casting Grunberg in his productions going back to his first Super 8 films when they were kids. Now Grunberg’s eldest son has an internship at Abrams’ production company Bad Robot, he told the crowd.

“He’s lucky he has me as a friend!” Grunberg joked. Grunberg told the story of how he was supposed to appear as the redshirt Olson in the 2009 Star Trek film, but couldn’t because of a scheduling conflict, so Abrams cast him as the voice of Kirk’s irate stepfather. Determined to cast him as a redshirt, Abrams had Grunberg play “Snap” Wexley, an X-Wing pilot in Star Wars: The Force Awakens.

“I have more lines in that movie than Mark Hamill,” Grunberg bragged.

After finishing his scenes, Force Awakens staff tried to get Grunberg to record the lines, “I’ve been hit!” “I’m going down!” and “Goodbye!” Knowing where this would (inevitably) take his character, he refused.

Grunberg had a larger role in Star Trek Beyond as the Yorktown’s Commander Finnegan, the Kelvin-verse counterpart of Kirk’s academy bully from the original series episode “Shore Leave.” The not-exactly-svelte actor joked that he insisted on wearing a spandex suit like Star Trek: Voyager’s Jeri Ryan’s, to help “shape his figure.” Grunberg also revealed how it was he who suggested the name Finnegan from canon and co-writer Simon Pegg eagerly agreed.

“That was just amazing, amazing,” he said. “I just love the fact that there’s a history to the character.” Chair from Star Trek Beyond

The biggest Star Trek element at MEFCC was the “Star Trek 50 artists, 50 years exhibit,” which has been traveling the globe. As noted in TrekMovie’s review of the accompanying “Star Trek: 50 artists 50 years” book, the exhibit is a triumph of risky artistic choices that, for the most part, paid off. While it was delightful to see these attractions at a con so far from Riverside, Iowa, there was not much of a Trek presence otherwise. In the fandom explosion of the last 15 years, Star Trek alas has not had as much of an impact as Marvel Comics, Star Wars, Harry Potter, and other franchises in the Middle East. I didn’t see any Starfleet uniforms, Klingons, or green alien women at this year’s Dubai comic con. (If I missed any, please tweet them to us @TrekMovie !) Having said that, the convention’s slogan was “Live long and comic con.” Staff wore shirts that read “Make it so” and volunteers’ shirts read “To boldly go where no volunteer has gone before,” both in the Crillee Italic font used for the TNG titles. Spot the “make it so” slogan on official MEFCC shirt So I guess we’re not doing too badly after all. That’s it for this report from Dubai and the 2017 Middle East Film and Comic Con. Keep up with all the event news and reports at TrekMovie.

I liked that Grunberg was Finnegan, but it would have been cool if he could have done the Irish(?) accent the character had in Shore Leave.

But, still cool the character was included!

As an Irishman, Finnegan’s accent wasn’t Irish. A touch of “Darby O’Gill and the Little People” perhaps though! 😂

Snap Wexley has quite the backstory in the Aftermath trilogy

It’s absurd to try to pretend that Grunberg is playing Finnegan. There’s not even the tiniest resemblance.

Re: absurd to try to pretend

It’s in the nature of the dramatic arts, its DNA if you will, that any roll an actor attempts is pretend. Absurd to assert that fictional characters are tied to the first actor’s appearance in performing the role. Shatner and Stewart are known lauded Shakespearean actors. Do you actually believe that when both were in their twenties they looked identical to each other and Shakespeare?

That question is nonsensical since neither actor was playing Shakespeare or each other. Hence, there’s no point in answering it.

Who cares
Reply to  Dingo

Check the credits. He is listed as Finnegan, on screen, its canon.

Disinvited
Reply to  Who cares

Wait, does that mean credit flubs and crazy credits are canon too?

So she really was Sister Edith Keeler then?

Not if you are educated and know that Shakespeare was also an actor and the first to play many of the roles he wrote that all three men have played.

Can’t wait for your logic and/or canon as to why the actor, Mark Lenard, could play 3 different roles in STAR TREK: a Romulan Commander, Sarek and Klingon.

If Mark Lenard had been 300+ pounds he would have never played any of those roles, period. Casting this guy as a starfleet officer is ridiculous. A civilian, sure. An alien race with huge body morphology, why not. Finnegan? I’ll just add this to the list of insults from JJ where Trek is concerned.

Whatever. I’ll enjoy seeing him playing Greedo in the Han Solo prequel….

So what you are saying is that even though the Trek movies have a history of cameoing real military servers such as General Norman Schwarzkopf, that Schwarzkopfesque Romulan Commander portrayed by a 301 lbs. Mark Lenard would insult you as, no doubt, the real General did?

Julie Newmar, Lee Meriwether, and Ertha Kitt all played Catwoman. None of them resemble Anne Hathaway. It’s absurd to think a role can’t be recast.

Anne Hathaway? You mean Shakespeare’s wife, how do you know how she looked? Also at Shakespeare’s times women were forbidden to play theater, so she never could had played Catwoman? But not that I’m educated or such.

Greg Grunberg is, presently, the fastest way to take me out of a movie. I can’t separate him from his character on Heroes, a character I found rather annoying.

I groan when I see him, too.
It does say to me that JJ is loyal to his friends. Commendable

The idea that this guy if Finnigin is ridiculous.

Who cares
Reply to  Karidian

No, its canon, check the credits.

No more ridiculous than contending that since Mark Lenard played three different roles for STAR TREK that Sarek was a Vulcan James Bond. Or William Campnell’s castings mean the Klingon Koloth was Trelane slumming.

“Campnell’s” was typoed. Should be “Campbell’s”

The Finnegan character had his fifteen minutes of fame. No one would care if he was played by Melissa McCarthy or Vin Diesel at this point…

They could have at least cast someone fit enough to pass the giggle test. He probably doesn’t even qualify to ride roller coasters, forget Starfleet.

Looks like STAR TREK’s not done breaking the diversity barrier when people can accept Tellarite body morphology as fleet ready but God forbid those same dimensions appear on a 23rd century human portraying their character as hale.

I’d sure like to see the military units where people are getting the idea that military recruits first enlistment requirement is that they come solely from the fashion magazines and catalogs’ covers?

Show me the military units with guys looking like this?

Re: Show me the military units with guys looking like this 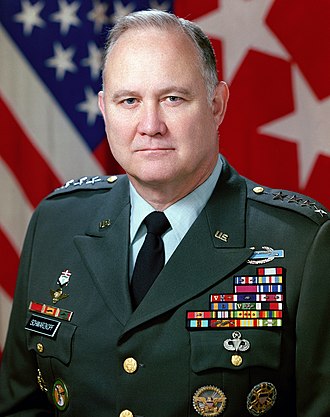 WW II’s US and British troops.

Not to mention the Nazi poster boys of 1937: 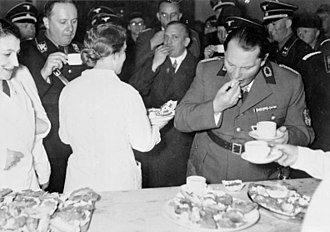 but you don’t have to go that far back to demonstrate that the actual out of shape soldier – not just the ones you claim to be able to tell from looks alone, the believability of which you specifically claim concerns you so, exists into this side of the millennium times. WASHINGTON POST 6/10/2005 TRANSCRIPT:

” Washington, D.C.: According to Rand, 36% of all soldiers fail to complete their first enlistment term. A substantial number fail BCT due to poor conditioning or drop out while in the DEP. Friday the Army announced that it was relaxing height/weight requirements for enlistees. Given that the Army is trying to ship to BCT as soon as possible after signing the contract, it seems that we’ll be sending soldiers doomed to fail to BCT. Aren’t out of shape soldiers a problem for units, particularly in theater?

[Retired Army Major General] Don Edwards: Out of shape soldiers are a huge challenge for units. Just imagine that situation in a combat unit. “

Some more up to date figures, debunking your military units’ unrealistic bigoted fantasies, from the US Army’s web site:

“…12 percent of active-duty Soldiers are clinically obese and 66 percent not at their ideal height and weight ratio.” – Col. Deydre Teyhen; Performance Triad program lead of the Army Office of the Surgeon General; April 6, 2015

Hmm. The T-shirts in the pictures seem to use the “Star Trek BT” font from TOS, not the TNG Crillee font as mentioned. [Yes. Yes I AM commenting on someone’s use of Star Trek fonts on a Saturday night, thank you for asking.]

I just enjoyed Greg Grunberg’s performance in “Big Ass Spider,” a dumb B-movie that is somehow better than it has any right to be. He brings a humanity to the role, and helps us to somehow accept some of the weird things that happen there. Worth checking out. It’s on Amazon Prime.

I don’t know this guy, so he means nothing to me. I just know when I saw him in Beyond I thought it was laughable and it pulled me out of the movie. When I saw him pop up in the sw flick I wondered if they had to build the X-Wing around him. Ridiculous. Then when I hear he is supposed to be Finnegan? Ha, gimme a break. Nero REALLY screwed up the timeline. Let’s see him and Kirk fight it out now. All he needs to do is toss a cheeseburger at him.

Re: I wondered if they had to build the X-Wing around him.

Wisdom gained, no doubt, from a now deleted scene in which Lucas built Jabba’s ship around the character in 1977’S STAR WARS to transport Jabba to the sequel?

”You want to know what I love about Star Trek? You want to know why the show is so popular? We had an episode in which Mick Fleetwood (of Fleetwood Mac) did a guest spot wearing the head of a fish. He looked like a giant perch, a giant gefilte fish. But there were no comments in the script about what an ugly creature he was. It’s not in the show’s vocabulary to comment negatively on ethnicity. And it’s not just black or white or Hispanic — it’s Romulan and Klingon and snake people and dog people. It’s that message of tolerance that makes Next Generation such a great show.” — Brent Spimer posted 3/6/1992 5am