This week Star Trek Online launched its 13th season, “Escalation”, a new update that sends captains to New Kentar, where they will team up with the Lukari to fight off the Tzenkethi. To celebrate this brand-new season, TrekMovie has teamed up with Perfect World Entertainment and Cryptic Studios to provide five Grand Prize winners with a powerful, limited-edition 26th Century Heavy Dreadnought (which cannot be acquired in the game at this time!), plus a Mirror Universe Danube-Class Runabout (Federation only). In addition, the next 100 winners will get a code for the Danube-Class Runabout. 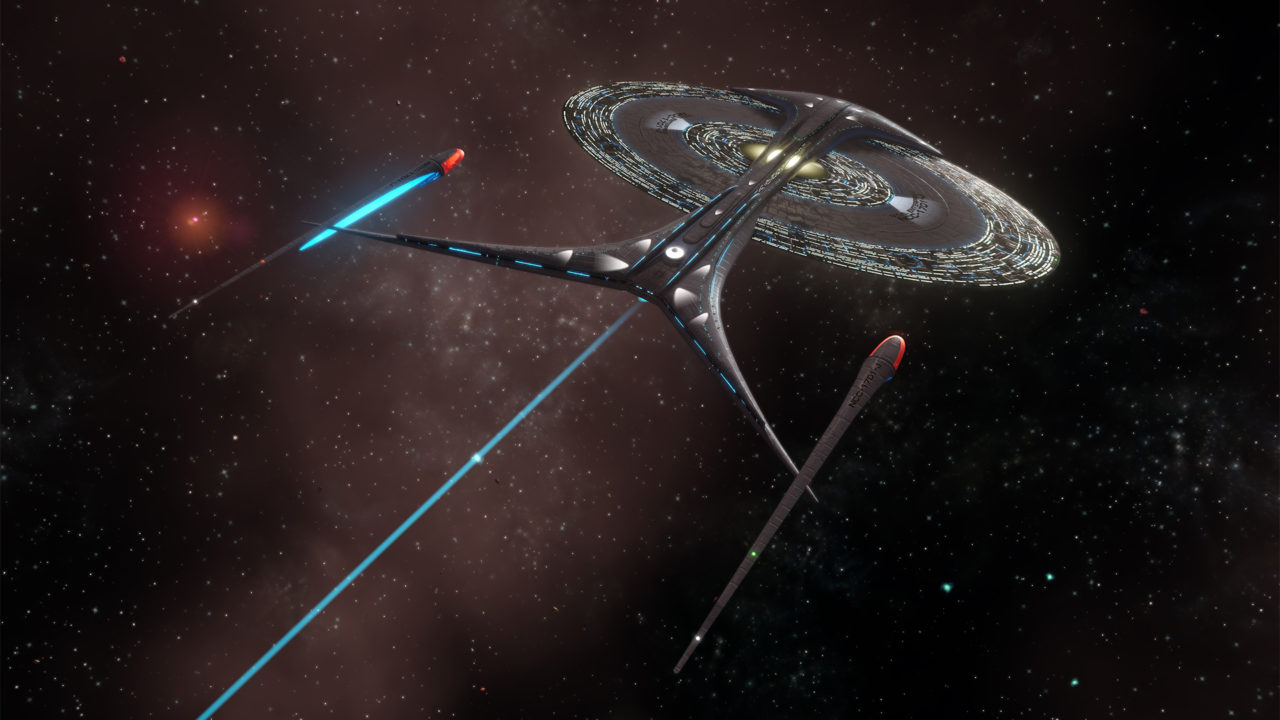 Redeeming a code for the 26th Century Heavy Dreadnought will unlock a powerful Tier 6 vessel. The prize will automatically adapt to a specific character’s faction and grant a single ship per account (Federation, Romulan, or Klingon). These ships are not available in game, so you’ll really be one of an elite group flying this baby through sector space. Ship options include: The Terran Empire Danube-class Runabout* is one of the innumerable Imperial Starfleet shuttles in service. This particular shuttle was captured during Captain James O’Brien’s invasion of the Federation and has been repurposed for select Captains in the Prime Universe.

*This ship is available for Federation characters only.

Five Grand Prize Winners will receive a code to unlock the 26th Century Heavy Dreadnought Tier 6 Ship (adapted to your faction) AND the Mirror Universe Danube-Class Runabout for Star Trek Online on PC.

100 More Winners will receive a code to unlock the Mirror Universe Danube-Class Runabout for Star Trek Online on PC (must be a Federation character to unlock this ship).

Always loved the design of the Universe-class, and they’ve done a bang-up job on the 26th-century Romulan and Klingon cruisers as well. That Romulan ship in particular has some incredible lines.

I love almost all the ships in Star Trek, but OMG, I HATE the Enterprise-J —- Seriously HATE that ship design!!!!

Was never a fan of that design. It was like a modern art painting of a starship which is fine as modern art but to actually build it like that….

Re: The Universe Class
You CAN be too rich or too thin.

Wow! Who would have thought that it would be possible to create futuristic designs which appear to be futuristic in the Star Trek universe itself!!
Next tv-show after Discovery: Star Trek the next next next generation! Make it so!

Damn, those dreadnoughts are sexy. The Romulan one is amazing.

I play a lot of sto and I love all the ship designs and the flow of the game. Myself am a huge fan of all Star Trek.

Long live birth of the federation. Nice slim and fast ship. This will help protect the federation prime objective and help keep piece with other races and the alliance of course. Using all three of these special ship designs will kick butt and help those who need help. Well done for creating them my freinds nice and live long and prosper.

But who wouldn’t’ t want this ship – I gave all my zen to win it and didn’t have any luck. I think this Giveaway is my last chance.

Those ships are awesome! The Romulan And Klingon dreads are outstanding. The 1701-J ??IDK…
The Klingon dread looks like one of the battleships on of Starblazers

Hm. Trekmovie.com participating in disenfranchisement of Trek fans who do not have (or want) a Facebook page. How thoughtful.

“These ships are not available in game, so you’ll really be one of an elite group flying this baby through sector space. Ship options include:”

Not sure what you’re talking about in terms of availability – I have 2 so far – the J and the Romulan. Good ships, just not exclusive in any way.