This month marks the return of veteran Star Trek comics artist Tony Shasteen to the Kelvin-verse after a short sabbatical drawing the highly anticipated comic tie-in for Star Trek: Discovery. 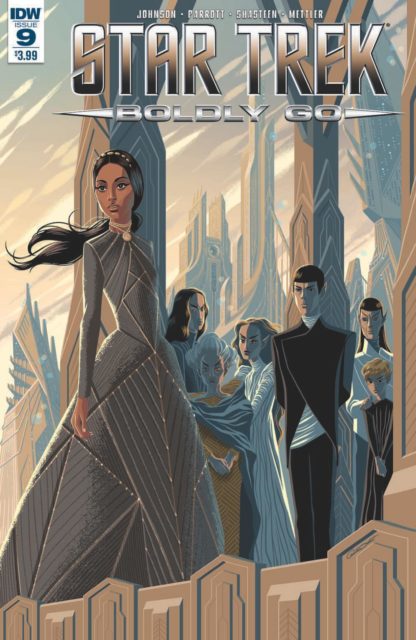 After last month’s disappointing conclusion to the two-parter “Murder at Babel,” writers Mike Johnson and Ryan Parrott have this series working again on all thrusters. Spock and Uhura are back on New Vulcan, each resuming their work on rebuilding the Vulcan Science Academy and teaching Earth history and culture, respectively.

What I love about this issue is that we pump the breaks on the action and get down to good old character-driven Star Trek. Sarek, having lost his wife, family, and home planet is adjusting to being a widower and single father in a strange new world. Whether it is illogical or not – it has to be lonely for him. So much so that he makes a seemingly offhanded comment about hoping Uhura enjoys this planet as her new home. The comment, obviously hinting at marriage, completely goes over Spock’s head and it falls to Uhura to explain it to him. What transpires next is the first of two (yes, two) of the most awkward, that’s-so-Vulcan marriage proposals of all time.

As Uhura contemplates her life on New Vulcan, Spock has discovered a new radioactive isotope that would make the planet self-sufficient, and therefore no longer under direct Federation oversight. It’s over 300 meters below the surface and would require an enormous drill just to get to it. If it sounds too good to be true, it probably is. Let’s just say that Vulcans don’t have much luck with large drills of any kind. After we get a welcomed update on the construction of the new Enterprise-A, Uhura starts to experience visions from the planet’s indigenous species warning her about the drilling.

The IDW comics are at their best when they don’t have to rely on re-imagining a TOS episode (see the aforementioned “Murder at Babel”). Johnson and Parrott are free to tell their own story, and it just works. Tony Shasteen is at his best here. The exchange between Spock and Uhura as they discuss the possibility of “matrimony” is superb and at times you not only see the likenesses of Zoe Saldana and Zachary Quinto, but sense their performances as well. I loved this issue and highly recommend it. Star Trek Boldly Go #9 arrives in comic book stores on Wednesday, June 21st and retails for $3.99. You can also pre-order it at TFAW with a discount. You can also order the variant cover by Arianna Florean or the photo cover.

And if you want to catch up, the trade paperback collection of Star Trek: Boldly Go (volume 1, collection of issues #1-#6) will be released on July 25th for a retail price of $19.99. You can pre-order from Amazon for 33% off.

Gotta love the way they talk about marriage in the preview, it’s so in character! You can see their mutual love and that special kind of flirting couples develop after being together for a while (the way uhura “translates” her vulcans is spot on) And it is refreshing to see two adults talking about marriage as an option. The funny thing is that this is far more similar to how it happens in real life for many stable couples, than the sappy proposals we are lead to believe are the norm.

I wish the movies had more character moments like that and really made a good use of the dynamics. The comics always do it, you get spock/uhura, Kirk and Bones being friends, little interactions between all the characters that hint at their friendship, the bond between kirk and uhura and their shared concerns for Spock when he’s in danger, Kirk’s respect for their relationship.
The different kind of dynamics are so important because through those interactions you really get to see character layers you wouldn’t otherwise see. You get to know them better and they are more relatable.

That’s the big downside of the nuTrek movies having no TV series to spring from: there are almost no small character moments to flesh out these relationships. Beyond did the best of the three with it, but even that just scratched the surface.

Vulcans have living rooms much like contemporary Americans? Who knew.