Last weekend Star Trek: Discovery took a trip into the Mirror Universe, which will continue in tonight’s episode “The Wolf Inside.” It was revealed in last week’s episode that various aliens, including Klingons, Vulcans and Andorians have banded together to fight the human-centric Terran Empire. And the video preview for tonight’s episode hinted that we will see some of these familiar Star Trek aliens.

Today, Entertainment Weekly got an exclusive on four new images from “The Wolf Inside” that revealed these aliens, giving us the first look at Discovery’s take on both Andorians and Tellarites. An Andorian from “The Wolf Inside” (CBS, via EW) Tellarite from “The Wolf Inside” (CBS, via EW)

The preview images are also noteworthy they also give us a clear image that the enigmatic character of Voq is returning, albeit the Mirror Universe version of the Klingon who vanished from the show in episode 4. Meeting of alien ‘rebels’ including Mirror Sarek and Mirror Voq Andorians and Tellarites in Star Trek

Andorians and Tellarites are some of the most important members of the Star Trek family as both are founding member races of the United Federation of Planets, along with Humans and Vulcans. Both aliens were introduced in the TOS episode “Journey to Babel,” which also introduced the character of Sarek. Kirk talks with Sarek, along with an Andorian and two Tellarites in “Journey to Babel”

Both alien species appeared periodically in the franchise over the years with some changes to the design along the way. The most recent was during the run of Star Trek: Enterprise, where Andorians were especially prominent. Captain Archer with the Tellarite Gral and Andorian Shran (“United”)

Star Trek: Discovery is available exclusively in the USA on CBS All Access. It airs in Canada on the Space Channel and on Netflix outside the USA and Canada.

Nice to see the Andorians largely the same. Love that new look Tellerite! Touches of the original & Enterprise version with a hint more alieness

I like how the Tellarite appears to have what I assume are tusks.

Looks like it. I like the alteration to the Andorian eyes too – how above the eye socket kinda mirrors the antennae.

@Karl — meh. The Andorians could be so much more interesting, as a species that presumably evolved from life living near volcanic vents on an ice planet. For instance, why do they need a nose when it’s a major source of frostbite among humans? Or to the extent they need it to warm the air, why not a longer more animal like chamber? The proof will be in seeing it all animated though. I’m also curious if they will fix the harder to mask “pink” areas around the eyes and inside the mouth. The picture above suggests they’ve got it right around the eyes at least.

…Except that you can’t stray too much from what has been established. Tweeks here and there are fine.

They look amazing! Love it :)

I like how they’ve taken those Andorian Attack Eyebrows from Enterprise and built up little secondary antennae beneath them! Though now I’m wondering if they’re also articulated. They might be able to give the vulcan eyebrow a run for its money.

I sew an antennae move once but it was like a half second before an edit point so didn’t get the full effect.

The Andorians and the Tellarites being easily identifiable as what they’ve always been only makes the extreme Klingon overhaul even stranger.

I agree and wonder if the reason they went so far overboard on the Klingons was to hide anything of Tyler that could be recognized in Voq.

Agreed. I think they took advantage of the canon loophole that DS9 and Enterprise provided to reimagine TOS Klingons to the extent that they could genuinely disguise Shazad Latif. Likewise I think this is why we’ve had so many subtitled scenes with the Klingons.

I don’t know, they seem fairly identifiable as Klingons to me. Someone online put pix of the old and new Klingons side by side and frankly there’s a lot more commonalities than differences. Warrior armor, head ridges, sharp teeth, batleths. All they really did was add some detail and remove the hair. That they look a lot more fierce is the effect, and I assume that was the point.

Conversely, the Tellrtes have added horns/tusks, enlarged skeletal features around the eyes, and they removed the hooved hands; Andorians now have enlarged brow ridges, larger cheekbones, and small antennas above their eyes.

I’m liking the updates to all three, and I think they look really good next to one another as a group.

I don’t know, they seem fairly identifiable as Klingons to me. Someone online put pix of the old and new Klingons side by side and frankly there’s a lot more commonalities than differences. Warrior armor, head ridges, sharp teeth, batleths. All they really did was add some detail and remove the hair. That they look a lot more fierce is the effect, and I assume that was the point.

Conversely, the Tellrtes have added horns/tusks, enlarged skeletal features around the eyes, and they removed the hooved hands; Andorians now have enlarged brow ridges, larger cheekbones, and small antennas above their eyes.

I’m liking the updates to all three, and I think they look really good next to one another as a group.

The people that have decided the klingons look nothing like klingons will never be convinced even though they are wrong.

I don’t care anymore about how the Klingons look. I find them recognizable enough. However, what they did to the Klingon fleet is still tough for me to swallow.

If they just had beards and hair…

I think the new Klingons would be fine if they just had hair.

Yeah, seeing this convinced me of that: 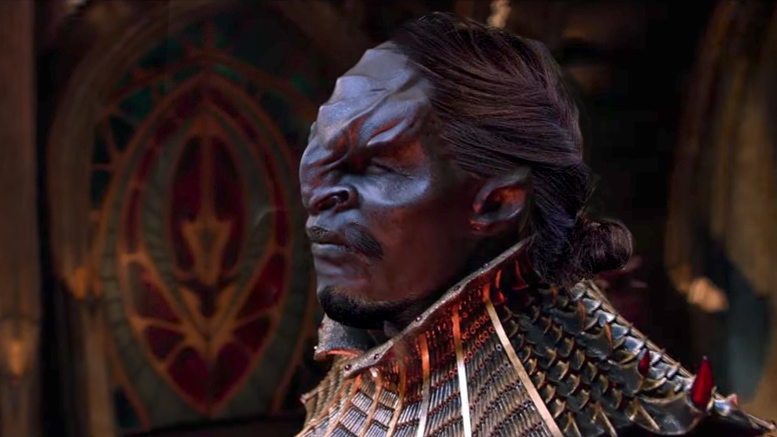 A few people have observed that with hair, these Klingons are virtually indistinguishable from TMP Klingons…

Sorry but I’m going to have to disagree. The Klingons in Discovery look like Klingons. Their cranial ridges, their armour, even the outlines of their ships identify them as Klingon.

Sorry, but you are wrong.

Except for the elongated skull…

The faithful approach to the other aliens makes me think that they really have just reimagined TOS era Klingons. Despite the fact that most of us would have accepted TOS Klingons as a byproduct of a 1960’s TV budget Enterprise and DS9 both established that Klingons really did look different in this period and I think the creatives behind the Discovery took full advantage of this to help disguise Shazad Latif. Althought I’m not the biggest fan of the new appearance I can accept it because I genuinely believe that if we ever see any post TMP Klingons they will reconcile the difference.

If the Klingons had the standard long hair, and facial hair they then look much like what we’re used to.

Love the changes to the Tellarite. I like the areas around the eyes a lot more than the TOS and ENT versions. The TOS ones looked too much like a mask over someone’s face (which of course it was) and the ENT ones seemed very droopy.

The ones from TOS always looked really cheap and fake IMO. I love the ones from Enterprise and its nice to see they look similar to those but changed a bit.

The Andorian and the Tellerite look awesome. Nailed it

I like seeing a Vulcan w/o the usual bowl hair cut. That wasn’t the case with TOS but has been de rigueur for Vulcans and Romulans since TNG

I honestly lol when they showed a young Burnham at the Vulcan academy and they gave her the Vulcan hairdo. If you want to be assimilated into Vulcan it seems you have to have that hair cut.

Bowl cuts are obviously the most logical way to cut hair

Wow the Andorian looks great and slightly updated from the Enterprise version. I do have to admit the Klingons do stick out more since the others look pretty much like their past versions even if updated. The Klingons would look more like themselves if they had hair at least. Maybe we will see one with hair at some point.

Nice to see them at last!

Neat update. The Andorian looks great and the Tellarite reminds me of a Dwarf right out of the Hobbit. Now these are well balanced upgrades. If they had only gone that way for the Klingons…

I’m just happy to see some original aliens on Trek. The article mentioned they have shown up from time to time but in what spin off series besides Enterprise did we see Andorians or Tellerites? One thing that bugged me in TNG was they were completely ignored.

It’s nice to see that the Andorians lost their ears again. :-)