IDW has just released their June 2018 solicitations with synopses and covers for all their titles. There will be two new Trek titles for the month. This includes the 3rd entry in Star Trek: Discovery mini-series Succession set in the Mirror Universe. Also due in June is another one of John Byrne’s New Visions TOS photo manipulation comics.

Now it can be revealed! This miniseries, centered on the Mirror Universe of Star Trek: Discovery, delves deeper into the characters you only thought you knew… 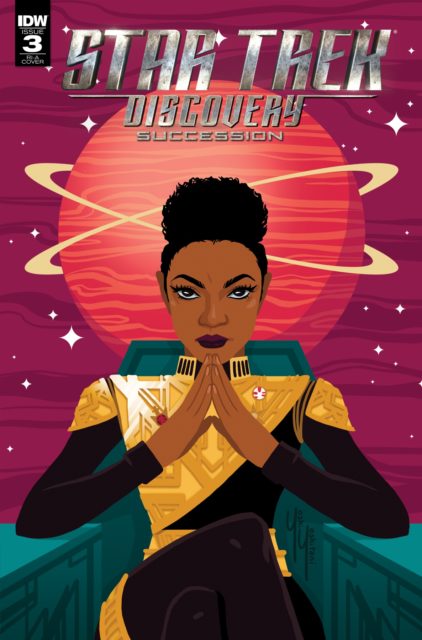 Not available at this time: variant covers by Yoshi Yoshitani, and Declan Shalvey and Jordie Bellaire.

Kirk and his crew venture into the past, only to discover it is nothing like what their history books teach—no trace of the devastation of World War III and the Eugenics Wars. What can have caused such a divergence? The answer is to be found in “An Unexpected Yesterday.” June’s issue of John Byrne’s Star Trek: New Visions series is the 22nd in the series, which he began back in May 2014. Earlier this month Byrne announced on Twitter that the 24th issue will be the last in the series, noting ” It’s been an amazing amount of fun, but I’ve felt this coming for a while.”  According to the author the series will “bow out with one last big itch scratched.”

The Volume 6 trade paperback collection (with issues 15, 16 and 17) was recently released and can be picked up on Amazon at a discount. Volume 7 (with issues 18, 19 and 20) is due in August and can be pre-ordered at Amazon. Me too. They are fun books to collect and read.

Same here. I would love to see an ‘Enterprise’ season 5, in the same format.

She’s the hottest woman on Trek.