In December the soundtrack of composer Jeff Russo’s music from the first chapter of Star Trek: Discovery was released, and now Lakeshore Records has set this Friday for the digital release of the second chapter, with 22 tracks of music from episodes 10-12. A CD will be out on May 24 and can be pre-ordered on Amazon.

In our WonderCon interview with Jeff Russo, he also discussed a vinyl release with select tracks from the entire first season which he estimated will arrive in June. Lakeshore Records has also teased that details on that vinyl release will be coming soon. Star Trek is getting the “IncrediBuild” treatment. The Star Trek: U.S.S. Enterprise Book and 3D Wood Model, a project first announced here on TrekMovie last summer, has now been revealed. Like with their Star Wars and other model books, Insight’s Star Trek IncrediBuild combines a full-color book chronicling the history of the original USS Enterprise, written by veteran Trek author Dayton Ward, along with laser-etched components for a wood model of the ship. 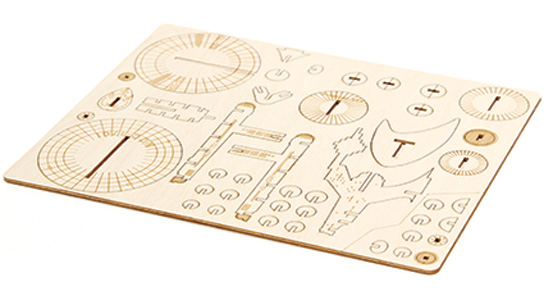 The USS Enterprise IncrediBuilds book and model will be released on June 12, with a retail price of $16.99. It can be pre-ordered now on Amazon.

Titan books is set to release the third in their series of Star Trek “autobiographies.” First revealed here at TrekMovie last year, David A. Goodman’s Autobiography of Mr. Spock is now available for pre-order. The book will be available on October 16 in hardcover for $24.00 and also on eBook for $12.97.

Here is the official synopsis and cover:

The Autobiography of Mr. Spock tells the story of one of Starfleet’s finest officers, and one of the Federation’s most celebrated citizens. Half human and half Vulcan, the book, written in Spock’s own words, follows his difficult childhood on the planet Vulcan; his enrollment at Starfleet Academy; his adventures with Captain Kirk and the crew of the Starship Enterprise; his diplomatic triumphs with the Klingons and Romulans; and his death and amazing resurrection on the Genesis Planet. We meet the friends he’s made, the women he’s loved, and experience the triumphs and tragedies of a life and career that spanned a century. His struggle to find his place in the universe is one we can all relate to.

About the Author: David A. Goodman was born in New Rochelle, New York. After graduating from the University of Chicago, he moved to Los Angeles in 1988 to write on the television sitcom The Golden Girls. Since then Goodman has written for over 15 television series, including Wings, Dream On, Star Trek: Enterprise, and Futurama (for which he wrote the Nebula Award-nominated Star Trek homage “Where No Fan Has Gone Before”). But he is probably best known for his work on Family Guy, for which he served as head writer and executive producer for six years and over 100 episodes. He is the author of Star Trek Federation: The First 150 Years. He lives in Pacific Palisades, California, with his family. Cover for Titan’s Autobiography or Mr. Spock, by David A. Goodman Wonder if the Spock autobiography will include his relationship with his adopted human sister?

I have a feeling this book won’t for some reason but I have to wonder, was his relationship with Saavik ever fully explained? I thought it was said that he may have been his daughter by the Romulan Commander and then somewhere else it was hinted that she wasn’t his daughter but that she became pregnant after the events of Trek 3 with his child and that’s why she stayed on Vulcan at the beginning of Trek 4. And then in Trek 6, Spock basically treats Valeris as his protege so there must be history worth writing about there. I may be more curious about this book than I was about the others…

Through the Looking Glass...

Still no word on a Discovery season 1 DVD/Blu-Ray set or iTunes release, eh? Wonder if it’ll EVER happen…

ATOZ the Librarian
Reply to  Through the Looking Glass...

thebiggfrogg
Reply to  ATOZ the Librarian

Don’t blame this fiasco on the Canadians!

Starlordtheoutlaw
Reply to  Through the Looking Glass...

Netflix’s own shows always take a long time to hit Blu-ray too, imagine Discovery will be the same way (it’s in their best interest to do this, unfortunately).

Matt Wright
Admin
Reply to  Through the Looking Glass...

I wouldn’t expect a physical disc release until right before Season 2. That seems to be the new marketing idea. They release the previous season for collectors right before the next season since interest in a property is high right before a new season.

Sounds about right. That way, CBS All Access always has “exclusive” episodes on their service, while also making money on the back-end (DVD/Bluray sales). I’m sure it will include a teaser trailer for “Season 2: Only on CBS All Acce$$”

Through the Looking Glass...

Just checked iTunes. Season 1 Part 2 Soundtrack is also in digital format available for pre-order on iTunes but with a release date of APRIL 6.

The USS Enterprise IncrediBuild released without an update to give the Enterprise a “proper” look?
There you go, it is possible.