The genesis of the Reginald Barclay-lead “Terra Incognita” can be traced back to last year’s epic six-part “Mirror Broken” series. That first issue (Free Comic Book Day’s #0), much like this one, starts from Barclay’s perspective and chronicles his rise from lowly Stargazer engineer to Chief Security Officer. If you haven’t already, I urge you to check it out. Although it’s not totally necessary, it’s a good primer and it’s free. You can get a digital copy directly from IDW or Amazon.

Part two of IDW’s unofficial “TNG Mirror Trilogy” was May’s 5-part “Through the Mirror,” with the two crews coming face-to-face for the first time ever. After having stolen the I.S.S. Enterprise-D, the Mirror crew figure out a way to cross over into the Prime universe in an effort to steal this one. Ultimately, the Mirror counterparts were no match for the Prime crew, and were sent back to the Mirror Universe. But not all of them went back…

In the afterward of Mirror Broken #0, writers Scott and David Tipton said that their approach to the TNG mirror universe was to introduce a low-level, yet familiar crewman to the readers and follow his ascent through assassination. Enter Reginald Barclay. 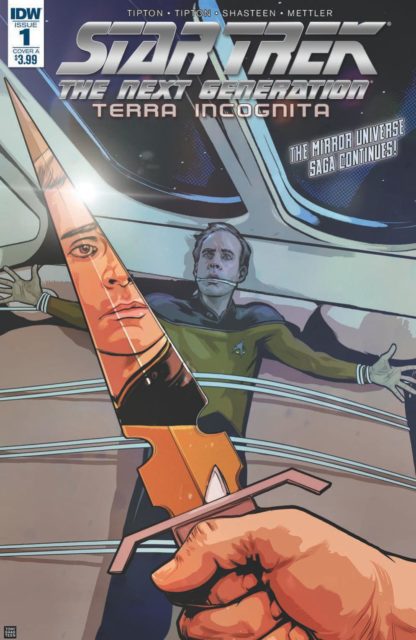 The story picks up immediately after the events of “Through the Mirror,” where a stowaway Mirror Barclay has successfully infiltrated the U.S.S. Enterprise-D, then tied up and replaced his doppleganger. What’s interesting about this story is that he is entirely self-motivated and not under the orders of Picard or the Terran Empire. He just wants a fresh start and to see what he “can make of himself in this new universe full of untapped potential.” What can a confident Barclay do in our universe? We’re about to find out. The first thing I noticed is that since this is taking place in our universe (and during TNG’s 4th season), there’s not a ton of action going on. This is a departure from the first two series and, quite frankly, very much welcomed. The pace has slowed down, letting the story breathe and gives us a chance to spend time with the characters we love. This is particularly evident to Mirror Barclay when he learns of his first assignment – feeding Spot.

Meanwhile, the Enterprise has been ordered to assist the repairs of the failed warp drive of the U.S.S. Hood. Riker and La Forge’s former captain Desoto is delivering a team of Vulcan ambassadors to peace talks between the Cardassians and the Federation. Since the battle of Wolf 359 happened fairly recently in this timeline, most of the fleet has been wiped out, and it’s imperative that every available ship be at full strength, especially going into negotiations with the Cardassians. There’s some banter between Wesley and Data about Mirror Data. The young ensign asks Data if he’d ever thought of “upgrading his abilities” (Mirror Data consistently upgraded himself with Borg implants). Troi, Riker, and Dr. Crusher enjoy each other’s company at Ten Forward when they notice a certain “holodeck addict” enter the room. Mirror Barclay then orders a whiskey from Guinan and let’s just say that her El-Aurian “intuition” kicks in. Over on the U.S.S. Hood, La Forge, Mirror Barclay and Ensign Gomez are greeted by Captain Desoto, who introduces them to his inept chief engineer, Mora. Because Mirror Barclay is looking at the warp core problem from a different perspective, he knows exactly how to fix it, but since La Forge thinks Reg is a “simpering failure,” he doesn’t listen to him. This leads into one of my favorite Geordi tropes: the coolant leak! The artwork is, of course, excellent as always. I’m just upset that Tony Shasteen is no longer drawing Trek. I hope it’s temporary, regardless, I will enjoy his work while we have it.

Again, what’s interesting about this story is that, at least so far, it doesn’t seem as if Mirror Barclay is here to cause trouble on behalf of the Terran Empire. Quite the contrary, at least in this first issue. He’s genuinely concerned about “his” reputation and actually tries to help. We’ll see if, in future issues, he lets loose his inner Terran and attempts an assassination to move up in rank. There’s also the question of what he does with Prime Reg. Would the Tiptons dare attempt to kill him off and imply that the Barclay we see post season four is actually the Mirror version? Surely not, but it’s fun to speculate. I’m looking forward to the rest of this series. Star Trek: The Next Generation: Terra Incognita #1 is out today, Wednesday, July 17th. It retails for $3.99. You can order it at TFAW with a discount, and there is also a photo variant available. The coolest coolant leak ever.

You know what this franchise needs? More Barclay….

Ha, same thing I was thinking. Barclay, seriously? I already can’t rewatch any episode with him in it. And his ‘cameo’ in FC was just awful. IMO.

Not to sure why anyone thought a character who’s main attribute was peeing his pants needed more content, but, hey, someone at Star Wars, Inc. seems convinced we want a Boba Fett movie, too.