The Anovos booth at San Diego Comic-Con was dominated by much of their Star Trek offerings of high-end replica uniforms, props and ships. Most of what was on display had been revealed before, but the surprise was the newly revealed third entry in their line of studio artisan replica ships from Star Trek: Discovery.

Earlier this year Anovos started selling studio-scale filming miniature replica ships from Star Trek: Discovery, starting with the USS Discovery and the USS Shenzhou. At Comic-Con they revealed the USS Enterprise from Discovery. Like the previous ships, the USS Enterprise replicas will be built by hand in Anovos’ Florida studio. They are built with aluminum and have steel infrastructures with rapid-prototype resin.

The ships have a complete set of lights and come with what Anovos calls ‘cutaway features.’ In the case,  you can actually remove the Bussard Collector domes to see the inner workings and blade in the Enterprise. Anovos is taking pre-orders now for the USS Enterprise, with each replica costing $9000. To order, or if you simply want to look at some nicely detailed images, head on over to the Anovos website.

UPDATE: Anovos has also released a video showing off the USS Enterprise.

Here are more photos of some of theStar Trek items on display at the Anovos booth at SDCC. 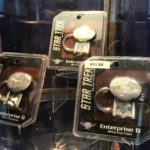 Money aside, because no I don’t have 9k to drop of a replica and wouldn’t if I had it… but I want the model kit to build of the Enterprise and Disco when they release it. Seeing these ship models and even the Shenzhou make me like them even more than I did seeing them onscreen.

I’m still on the fence about the nu-Enterprise, but MAN that is a sweet model. WANT.

(Edited to add): There is no way that this Enterprise is 2000 feet long or whatever ridiculous number I’ve seen floating around. The windows would be HUMONGOUS if the ship was that long.

Maybe, though you could say the same thing about the claims ILM made about the theoretical size of the Abrams ship, which have never been settled to anyone’s satisfaction. But it almost certainly has to be bigger than the TOS version in any event.

Wow, I may not entirely love the Disco Enterprise but that model is pretty sweet!! One thing I would like to know (not that I have $9K sitting around)- how long is the studio model? Is it the same size as the studio model of the TOS Enterprise in the Smithsonian?

There hasn’t been a studio model built since Voyager, DiscoPrise was total CG.

The Smithsonian E is 11ft 2in if I recall. Nowhere near that size, obviously.

Anyone else think the DiscoPrise looks an awful lot like Phase II, apart from the nacelles?

They probably based a lot of stuff on un-used concepts. The Disco itself was a concept Enterprise for a cancelled movie.

I dunno. It’s kind of a shark-jump, imho. The nacelles are saggy in these photos.

Agreed. I’m sure the nacelles are not lightweight at that size, esp with lighting and mechanical bits, but if the armature is steel underneath, it ought not to do that – not for $9,000 a pop anyway.

Nacelles don’t look “saggy” to me at all.

They are. Especially in the shots from the side.

Concur. The price tag aside, I actually am on the fence on which version of the ENT is best (but everything is still better than the TOS Ent, sadly)…

Um, no. You should see that thing at the Air and Space Museum in D.C. It’s gorgeous.

It sure is. And you can walk right up to it! I also love the fact that the model has a place of honor near the main entrance to the museum.

Yeah, it’s a far cry from its dilapidated state on display in the gift store, which is how I got to see it (on my way home from a “New Voyages” shoot) in 2009.

Oh, just a tad and with a bit of Gabriel Kohner’s tossed in for good measure.

It looks closer to April’s Enterprise from the deleted scene of Into Darkness.

I’m guessing that if this version of the Enterprise had been lit and rendered on the show to look more like these photos, fans would have been happier with it.

I agree. So far all the physical models outshine their CG counterparts.

It’s interesting seeing this model, with the portholes around the outside of the bridge. This clearly suggests rooms on the outside of the central bridge, which would be a major redesign of the TOS bridge. I’m imagining a ready-room, and a briefing lounge, much as we’ve seen in the TNG era. It’s going to be interesting to see how they’ve reimagined the internal space.

Holy shit, that’s gorgeous. And if you say it’s not: you’re a damned liar. ;)

Seriously!!! I’ve never taken any CGI seriously as an actual ship. Not even JJ-prise looks real to me despite the 150 million dollar price tag on those movies. Why not just go back to miniatures?

Why not go back to horses and buggies?

@albatrosity I agree. The ideal combo would be CGI for fast moving/rotational action sequences, but for slow moving or stationary shots a physical model makes it that much more tangible

I think it’s why I loved the ship shots from First Contact so much. The E was a mix of cgi and real model. And it worked beautifully.

The TMP drydock sequence was a valentine to the fans and I still remember being blown away by it as a kid when I saw it in a theater. Stunning. Also agree about the E reveal in First Contact which looks great at virtually any angle (unlike the D which was always a bit top heavy).

Anovos is PAINFULLY SLOW in filling orders.
I ordered an outfit for my wife. When I simply asked for an ETA after 6 months, they sent a refund.
I’d love to own this Enterprise but when I pony up my 9K I want to take my Enterprise home with me.

Well, they are hand built, and at 9K a pop, probably made to order. Doubtful they have inventory. Beautiful model, though.

Nah, don’t like it. The new Ent is too squat for me, the nacelles too low and the ship looking too elongated. I think she looks better when the ship is tall, the nacelles in a narrower angle V

I find the warp engines to be on the chunky side, personally. Beautiful model, though.

It should be big and chunky. It warps space and time after all.

Still. SO much better than JJ’s Edsel-prise.

who could afford this?

What the hell is a Bussard Collector?

If you watch Star Trek, you wouldn’t need to ask.

I’ve been watching it for years. I’m just not that nerdy about it.

The Hell you’re not … you just refuse to own up to it.

Sure Steve, sure steve.

I agree. Eaves design style always has lines and sharp edges to them. Makes ship look too busy and junky.

His E-E had hull plating that looked like it belonged on the K’tinga. I mean, seriously, look at the old AMT kit.

How can it be studio-scale when there is no physical studio model?

So much for truth in advertising …

I hope we get to see this baby in action a bit during Discovery S2. Do we have specs in terms of crew complement? Are they adhering to “The Cage’s” number of 203?

I doubt the writers of STD will adhere to anything seen or heard during TOS.

@AJinMoscow — They don’t have to adhere to that number to adhere to canon. THE CAGE took place in 2254. We have no idea how big the crew was in 2257 when Disc. rendezvous with the Ent.

The best thing about STD is easily the Enterprise. It is a very nice design.