Commander Airiam is one of the more intriguing characters in Star Trek: Discovery. The science officer played by Sarah Mitich appeared in 11 episodes of the first season and stands out on the bridge of the USS Discovery due to her unique appearance. It has never been fully established what Airiam’s nature is–secondary sources have described her as a “robot,” an augmented alien and an augmented human. Sarah Mitich as Commander Airiam in the season one finale of Star Trek: Discovery

Airiam will return in the second season of Discovery and at WonderCon earlier this year, (now former) showrunners Aaron Harberts and Gretchen J. Berg said we would learn more about this character, with Berg noting “Airiam is part of the bridge crew and we have a lot of thoughts of who she was and what the augments are all about.”

And it is possible we are getting a preview of some of what is in store for her in the IDW comics. Tomorrow the fourth and final issue of the Star Trek: Discovery: Succession series arrives. In this series set in the Mirror Universe after the events of the first season, Airiam’s Mirror Universe counterpart has played a prominent role. 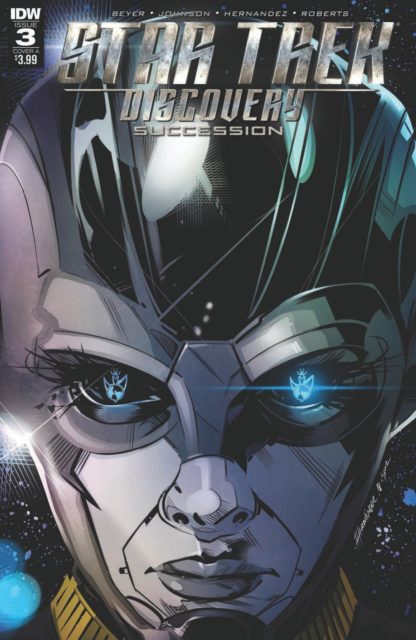 While the comics are technically not canon, comics co-writer Kirsten Beyer is also part of the Discovery writers’ room and co-executive producer Ted Sullivan has said that they consider the books and comics to be canon, with the caveat that they may need to contradict them. So, elements of the books and comics may find themselves on the show, and in fact, it’s happened a few times already.

And in issue #4 of Succession we see Airiam reveal her true self briefly as she removes her helmet to replace it with a bit of new bling. What is underneath is a sort of mottled grey skin that doesn’t appear entirely human, but could be the result of injuries or some kind of genetic manipulation. The moment in the comic is reminiscent of another famous franchise when an iconic character was finally unmasked. Earlier in the series, one of Airiam’s augmentations, or at least one for Mirror Airiam, was also revealed. Airiam’s helmet deployed a visor which completely sealed her in and protected her from at least toxic gases and possibly a vacuum. It’s possible the Prime version of Airiam also shares this augmentation. 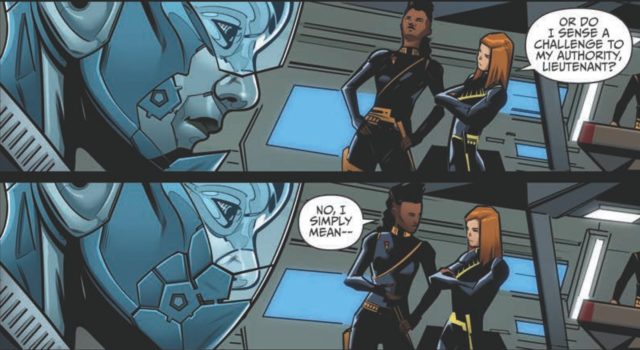 Mirror Airiam shows off one of her augmentations in Star Trek: Discovery: Succession #1

Here are the cover and first five pages of the fourth and final issue of Star Trek: Discovery: Succession, due out on Wednesday, August 1st. Look for a full review after STLV. 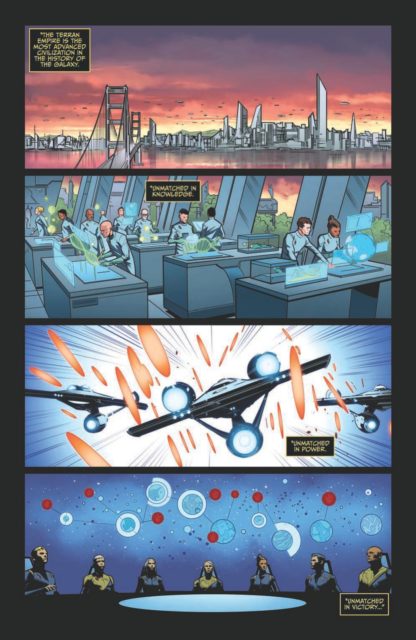 man at least get the universe ships correct geez

I wish these new/recent TREK comics would print their blacks as SOLID BLACK instead of the washed out dark grey. To me, it just reads as ammateurish, and is quite off-putting unfortunately.

Thanks for the Rick Roll on that famous unmasking. Did not see that coming. That got a few laughs.

Might Airiam be an Andorian who was horribly wounded and rebuilt as an augmented being?

reminds me of borg, too advance for pre tos imo

But it’s wasn’t too advance to have androids running around all over TOS? Traveling faster than light is OK, but augmented body tech is too advance? According to TOS she should be in a wheelchair that can only blinks for Yes and No. LOL

You just have to look at our current level of tech to see how hopelessly outdated TOS is.