In the final panels of Terra Incognita #1, it was clear that Mirror Barclay was quickly coming into his own on the Enterprise-D. In just a short amount of time Mirror Reg has already become a respected member of the engineering crew, just by being assertive. This “new and improved” Reg is oozing so much confidence that he even had a date with Ensign Sonya Gomez. Terra Incognita is an attempt to bring us the Barclay we first saw in “Hollow Pursuits” – one that’s free from anxiety, stuttering, or, ironically, a debilitating holodeck addiction. During the IDW panel at this year’s Star Trek Las Vegas convention, group editor Denton Tipton (no relation) revealed that each issue of Terra Incognita is “kind of a standalone but there are some subplots that carry through.” Issue #2 continues one of these subplots from the first issue: the Federation-Cardassian peace talks.

After defeating Picard in a fencing duel, Captain Desoto reveals that he wants the Enterprise to negotiate the final set of peace talks between the Cardassians and the Federation. Since the Cardassians consider transporters a security risk, the representatives of each side will need to transport to the planet Telvina 2 via shuttlecraft. The only way the Cardassians even agreed to these talks is because the Vulcans (representing the Federation) promised that there would be no interference. That means as soon as the shuttlecraft leaves the ship, both the Enterprise and the Cardassians must leave the Telvina system. Picard is understandably uneasy about this setup but the Vulcan ambassador, Hendryk, assures him that everything will be fine. Sure. Picard places Counselor Troi in charge of this incredibly important mission. Conspicuously, our favorite resident mirror universe officer only appears in one scene in the entire issue. While preparing the shuttlecraft for launch, Mirror Barclay almost reveals himself when he tells an ill-advised “joke” at the expense of the Cardassians. This leads to a laugh out loud moment when Hendryk expresses to Troi that Barclay “may need some counseling.”

The shuttlecraft Newton picks up the two Cardassians, and we’re off to Telvina 2. One of the Cardassians, Karan, asserts her authority immediately by disparaging Troi’s credentials for this mission. Soon after the inertial dampeners fail (why are they always failing?), the shuttle crash lands on the planet in a rather spectacular fashion, conveniently injuring the secondary characters. Seriously, take a look at the incredible crash sequence by returning artist Carlos Nieto (with colors by Fran Gamboa). Buy this issue for that sequence alone. What happens throughout the rest of the issue is such a breath of fresh air. Marina Sirtis has gone on record many times, saying that the writers didn’t give her character much to do until the later seasons. What’s great about this issue is that the Tiptons wrote Troi as the badass Starfleet officer she was trained to be. It’s almost like a “Skin of Evil” – type redemption for her character. Both start off with shuttlecraft accidents, but the journeys to the end are quite different.

The Tiptons are showing that even though TNG ended after seven seasons, there are interesting stories within those seasons that can still be told. They are master storytellers when it comes to high stakes, multi-issue series but this is further proof that they can also do compelling “bottle” stories that are more grounded, but no less exhilarating.

The fact that Mirror Barclay only appears in one scene is a brilliant tactic – it almost feels as if his whole story was a ruse to giving us more TNG comics. That’s fine with me – personally, I’d love to see an ongoing TNG series. But until that happens, I’ll be enjoying this series and wondering what Barclay’s been up to until the next issue. 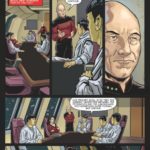 Star Trek: The Next Generation: Terra Incognita #2 was released, Wednesday, Augusts 15th. It retails for $3.99. You can order it at TFAW with a discount, and there is also a photo variant available. And on September 4th the trade paperback collection of Star Trek: Discovery: The Light of Kahless comes out. You can pre-order it at Amazon, discounted to $10.99. I sense that this comic is going to be fun ;)