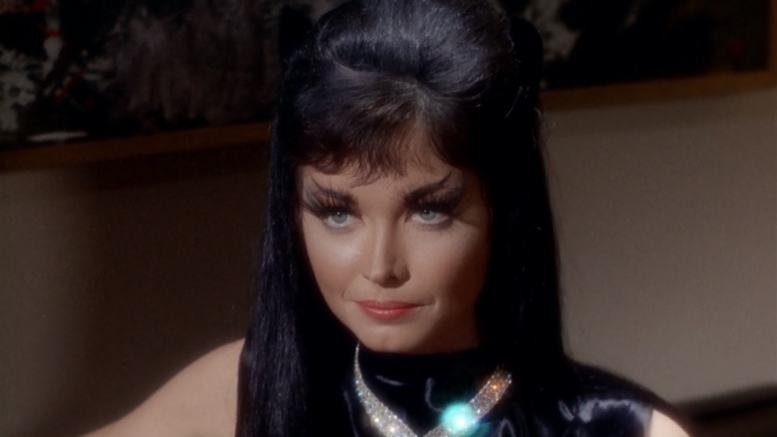 Once again our friends at Roddenberry Entertainment have unearthed a piece of Star Trek history. Today’s episode of Larry Nemecek’s The Trek Files solves a casting mystery that dates back to Star Trek: The Original Series.

One of the memorable performers from the second season finale of Star Trek: The Original series had no lines and shared billing with a cat, but is still enduring to this day. That season finale, titled “Assignment: Earth,” was a sort of backdoor pilot from Gene Roddenberry as a backup plan in case Star Trek didn’t get a third season. It was a time travel show, with the Enterprise traveling back to 1968, the year the second season was on the air. The focus of the episode was on the mysterious character Gary Seven, trained by aliens to save the Earth from itself. Gary’s constant companion was a shapeshifting pet cat named Isis. While Isis seemed to speak telepathically with Gary Seven, the actress who played Isis in her human form never spoke. As such, she was one of many extras who was never credited, leaving her identity a bit of a mystery. Kirk, Gary Seven and his cat Isis in “Assignment: Earth”

For years Playboy pinup and actress Victoria Vetri was associated with the role, even garnering her a page on Memory Alpha, the Star Trek wiki. TrekMovie even did an article about Vetri back in 2010 when she ran into some legal trouble. However, in 2018 the actress and model revealed she was never part of Star Trek, and her credit was subsequently removed from Memory Alpha, leaving the identity of the performer as “unknown.”  Star Trek history knew the name of one of the cats who played Isis (Sambo), but the name of the human actress remained a mystery. Until today. Isis in her human form in “Assignment: Earth”

Combing through Gene Roddenberry’s archive of documents from Star Trek: The Original Series, the team from The Trek Files came upon documents for “Assignment: Earth.” These documents regarding production details for the episode could finally solve this mystery of the Isis actress. The standard actors call sheet for  January 5th – the one day Isis was on set in her human form – includes a listing for a performer to be on set 10:00 AM, but only lists that performer as “1 Female (New)” under “Atmosphere and Standins.” 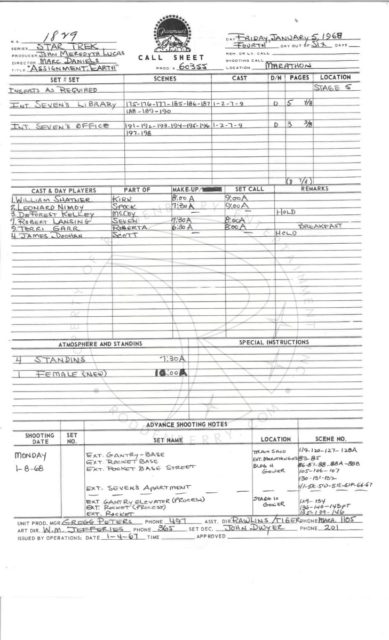 Actor call sheet for “Assignment: Earth” doesn’t give the name for the “new” actress due on set at 10:00 am

However, the “Extra Talent Call Sheet” for that day was the key. Along with other familiar “Standing” background extra actors such as Eddie Paskey, there is a listing for “1 Cat Girl” to be on set at 10:00 AM. Importantly, it includes the performer’s name as April Tatro. Tatro herself was contacted by The Trek Files and confirmed she played Isis in human form for “Assignment: Earth.” According to the sheet, Tatro was budgeted to be paid the standard rate for all the extras of $29.15 for the day, plus the cost for time for being fitted with her costume and body makeup. An additional production report unearthed by The Trek Files shows her adjusted rate of $84.51. April Tatro worked mostly as a contortionist, performing on stage and on television. Just months after her work on Star Trek she appeared again on NBC, on The Tonight Show with Johnny Carson. Tatro also appeared on Laugh-In, Fernwood Tonight and The Gong Show. Her career on television ran through to 2001, appearing again as a contortionist on an episode of Malcolm in the Middle. April Tatro in a 1997 episode of the sitcom Ellen

Larry Nemecek had a chance to speak to April Tatro about her time working on Star Trek’s “Assignment: Earth” on the episode of The Trek Files released today. Nemecek tells TrekMovie: “This week’s episode is one of those  that makes the whole concept of The Trek Files worthwhile. We’re going to be solving a Star Trek mystery.” On the podcast, Tatro talked about her fitting for her rather skimpy costume, saying, “I’d never had so much attention in all my life.” Speaking of attention, Tatro also reveals that Star Trek star William Shatner asked her out. Even though she was engaged to be married in just two weeks, she accepted the offer and went out to lunch with Shatner.

Get all the details by listening to the podcast available on iTunes, or you can warp on over to podcasts.roddenberry.com.

Keep up with all our coverage of Star Trek history at TrekMovie.com.

“Tatro also reveals that Star Trek star William Shatner asked her out. Even though she was engaged to be married in just two weeks, she accepted the offer and went out to lunch with Shatner.”

Of course, Shatner was married as well. But lunch seems innocent.

His marriage was already over at that point; papers may not have been yet been signed, but it was done.

That is really good.

Oh, cool! It’s so amazing that we’re still learning new things about TOS after all the time. I mean, it’s not as if there haven’t been innumerable books and articles published about the show already. :-)

Corylea TOS has a gold mine of information we don’t know yet.

That is a incredibly cool trivia! What a neat find! It’s stuff like this that makes me proud to be a Trek fan, that we love the show so much and want to know every possible bit of information about it. I should start to listen to Larry’s podcast!

What a cool bit of trivia. Good work Detective Nemecek.

So odd that this has taken this long to come out. For years I fought the notion that it was Victoria Vetri. I never understood that. Didn’t look like her to me.

Again, a really cool bit of trivia to know here.

And now that I’ve seen her contortionist video it seems they cast well….an actress as, or more, flexible than a cat.

What ever happened to starships time traveling to the past all willy nilly for “historical research” anyway?

So there was some inner Kirk in Shatner himself :))

He did this for a lot of the women. The bellydancer from Wolf in the Fold has an account in her book of her being shocked when he came to pick her up without his toupee. He was married as well.

What a great find. Great story!

Oh. Pondering if the aliens who sent Gary Seven could be the Red Angels in Discovery? Or if there’s some connection between those aliens and the ones behind the Red Angels.

spock said the red angel was human and female

Larry, thanks for this Trek Files episode that reveals the true identity of Isis. I see the article mentions that in 2018 Victoria Vetri denied being Isis. I would like to point out that way back in 2012, I revealed that Vetri was not Isis in my self-published comic, 3-D Pete’s Star Babe Invasion Comics, issue 3. I corresponded with her while she was in prison! I tried to let the Trek world know, but no one would listen! Anyway, thanks for the scoop! Mike Fisher
Instagram: galacticfishproductions

What a great discovery, especially since “Assignment: Earth” is one of my favorite episodes! Listening to the podcast, Miss Tatro sounds like such a kind person. :}

Any relation to the late Richard Tatro, who played Norman in “I, Mudd?”

The same question occurred to me. Can somebody call her back and ask her?

This is a strange synchronicity. I was just thinking about Gary Seven yesterday. I had an image of the British actor Chiwetel Ejiofor playing him on the new Philippa georgiou section 31 series. Interesting coincidence.

His semblance to Robert Lansing is indeed quite uncanny. :P

This is amazing — what a find!

You know there are whole pages dedicated to the watch Gary Seven wore (evidently was a Rolex – I’d never even noticed or thought about it)
http://www.rolexmagazine.com/2008/11/start-trek-rolex-gmt-master-at-nasa.html
https://www.rolexforums.com/showthread.php?t=83222
http://rolexdiamond.blogspot.com/2011/07/
https://forums.watchuseek.com/f2/watches-star-trek-4674575-2.html

There’s even a crazy guy who wrote and recorded music and put together opening credits for what an Assignment: Earth show might have been like….http://supervisor194.com/

All forms of minutia the internet and fandom feed into and off of, but I’m still very surprised this bit of information never came out.

All those wasted years she could have been on the convention circuit! She’s a legit Star Trek legend!

I was thinking that. Hopefully she’ll get a lot of bookings now.

Did she not realize what a big deal this is? Who knows, maybe not. She has to have known what Star Trek became.

What a neat story. She looks good today.

Shatner took her to lunch? I wonder if that worked out to be an entry for his captain’s log!

What, nobody has a comment for my double entendre??

oooooh, nasty, man! How much you wanna bet he buttered her muffin at lunch?

She really was perfect for that role…such supernatural feline grace !
Old Cat-Man .

Alien with an Attitude

You call that a skimpy outfit? Even with the stricter rules of the times, there were women on Star Trek who wore more revealing costumes than that.

What a great story! She looks wonderful today and as many said here, it’s nice to learn new things about TOS all these years later. The question that was never answered: Is she a woman, is she a cat, ot a shapeshifter? GREAT article, thanks :)

Interesting bit of Trek hisstory.
I wonder why there was so much pussy-footing around this casting issue for years.
Though, it was classy of Tatro not to pounce on the false attribution.

I see what you did there :)

Oh come on., She’s didn’t want to come off like a clawed.

Gary Seven is one of the intriguing corners of TOS that has never been explored on screen beyond the one episode. I wonder if the Discovery team is sniffing around story possibilities for ol’ Gary and Isis.

I would have felt that way too until I saw how elegantly they revisited The Cage. Probably they won’t touch Gary Seven as he would not have shown up in the Discovery timeline yet.

sorry that english not my first language.

my feeling are, as usual, mr shatner was a very naughty rascal!

https://www.vidoevo.com/video/MXlwbDVWcWuRpWVhlZEU/april-tatro-show My friend, Jim found this video on YouTube of April Tatro performing on the Gong Show. And as Chuck Barris notes, she’s from my home town of Astoria, Oregon.

dang she missed out on so many star trek conventions…

I’m surprised that Marc Cushman missed that detail when he researched his very thorough and complete ‘These Are The Voyages’ volumes.