On Saturday of the big Star Trek Las Vegas convention last month, Creation hosted the annual costume contest.  Contestants entered pre-judging earlier that afternoon, and the best of the best were selected to compete on stage that evening.  Jordan Hoffman hosted, introducing each contestant, and this year’s judges included Discovery actors Mary Chieffo and Wilson Cruz, and makeup gurus James MacKinnon (makeup supervisor for Discovery and Picard), and the legendary Michael Westmore. Every contestant displayed amazing talents but in the end, five Trekkies stood out and were recognized for their efforts.  The top winner received a $1,000 gift certificate from Creation. Michael Melton as Captain Pike in “The Menagerie” More images from the contest 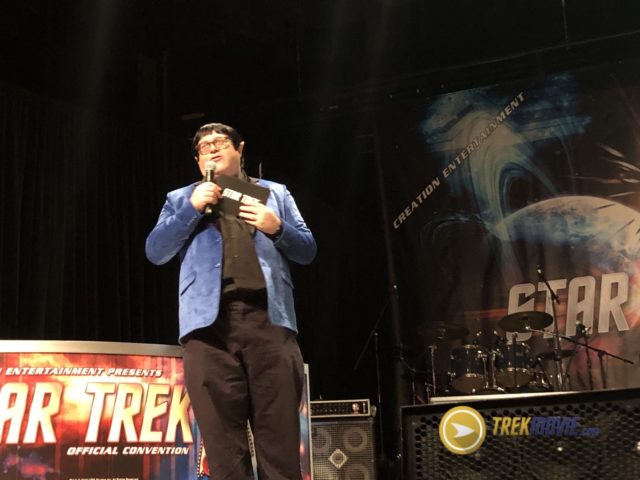 Check out the rest of our coverage on STLV.

My wife has a childhood friend who has been turning up as Dragpool at Comic Con San Diego the last couple of years. He’s got the cosplay skills down to a point where it’s scoring some paying gigs now. It’s not my thing, but there are some crazy skilled people out there who really enjoy costuming….

Interesting. I’m curious, what sort of paying gigs are they? Just regular folks paying to have costumes made or something for television or stage? Or all the above?

That Borg is awesome! Captain Pike is also very good.

I like mash-ups. I’m thinking of doing a mash-up of Tron with a Klingon or Andorian.

I’m always amazed at the fans and the amount of detail and commitment they put into these costumes every year. And anyone who goes through the trouble of making themselves a Borg shows a level of fandom only most loyal fans are at. Always fun! Congrats to all the winners!

Not sure if it’s just the producers cherrypicking, but there’s a telling number of Discovery costumes in these pics. It makes me wonder, at what point will Discovery’s aesthetic sort of supplant, if you will, the older treks. For instance, seeing the Klingon looks so much like 90s Trek, whereas the new Klingons have a totally different aesthetic. It’s like, when you see a Klingon cosplay, I don’t think you ever see like a 60s Klingon like Kor. So I feel like the day will come when Klingons in the popular imagination will look like they do in Disco. Coolest and cleverest cosplay I ever saw was in NYC in 2016 for the 50th, Khaaanye West and Kim Cardassian, seriously impressive duo and props to them.

I can imagine 2 simple reasons for Discovery seemingly being overrepresented in these contests: 1) It’s the newest show so people probably haven’t done a costume for it before whereas they may have done all their favorite TOS or TNG-era costumes already. 2) Discovery has had a number of very intricate and richly detailed costumes which makes it a bigger challenge than some of the more simple earlier costumes. And people like challenges.
As for newer shows replacing the older shows’ aesthetics I guess it depends on how consistent future shows will be in their depiction. As you say, very few people do 60’s TOS Klingons anymore because the look has been replaced by the movie/TNG-era look. If the newer Discovery style is used for several years it may start to replace the movie/TNG-era look. However, the Discovery producers have already dialed it back a little to get back closer to the previous look so who knows how this is going to develop.

Do you really think in the current climate and in this day and age a blackface makeup for the original klingons would really work?

I mean, it doesn’t have to be in blackface… and the entire look is problematic, but like there’s nothing stopping anyone from dressing in the old uniforms and no ridges on their face. I think it’d be cool to see, actually.

Wasn’t Koloth a fair-skinned Klingon? I don’t remember him being painted brown.

Michael Pataki’s klingon character who picks a fight with Scotty was also fair skinned if I remember correctly.

Very nerdy question, but is the map of the Earth meant to be in reverse on the Terran Empire emblem?

Yes. The Star Trek: Discovery graphic designers decided to take “mirror” a bit too literally, and that the Earth must be physically mirrored too.

I’m pretty sure it was always upside down in the other shows.

Those costumes are okay, but I once wore a pair of pointy ears and a wig on halloween. Where’s my prize.

I hope your prize was candy ;-)
Gotta show your costume to someone giving out prizes if you want a prize.

Hard to see why you didn’t win. If all you wore were ears and a wig, and you didn’t get arrested for indecent exposure, you had to have the Vulcan muscular self-control down pat…