This morning CBS All Access dropped the entire ten-episode second season of The Twilight Zone, the modern reimagining of the classic TV series. The new show from executive producers Jordan Peele and Simon Kinberg continues the legacy of socially conscious storytelling in season two, promising “introspection and self-exploration to usher viewers into a dimension filled with endless possibilities.”

“Meet in the Middle”

Lonely bachelor Phil (Jimmi Simpson) finds meaningful human connection when he discovers a telepathic link to a stranger named Annie (Gillian Jacobs). Their connection quickly sparks a romance, but not everything is as it seems in this seemingly idyllic fantasy. “Meet In The Middle” — Pictured: Jimmi Simpson as Phil

After a recent promotion to hotel manager, Michelle (Morena Baccarin) feels like she’s on top of the world, but any cause for celebration is short lived when the nature of her reality is called into question. Struggling actor Harry (Ethan Embry) risks everything to catch his big break, but an impulsive scheme takes a few turns no one saw coming. “The Who Of You” — Pictured (l-r): Miles Foley as Son; Ethan Embry as Harry; Daniel Sunjata as Detective Reece

The music career of struggling singer Jasmine (Jurnee Smollett) takes off overnight after she witnesses a tragic incident. Jasmine begins receiving rapturous applause everywhere she goes, but she soon realizes the relentless recognition comes at a steep cost. At the outer reaches of the world, a team of scientists discover a new highly intelligent species, but its existence may endanger more than their research. A grieving couple’s (Chris Meloni and Jenna Elfman) move is interrupted by an otherworldly encounter, leading them to second guess what’s worth leaving behind. Written by Steven Barnes and Tananarive Due, Directed by Alonso Alvarez-Barreda

A quiet church handyman (Damon Wayans Jr.) uncovers a magical scale model imbuing him with the power to help his struggling small town. But with the sleazy Mayor Conley (David Krumholtz) taking all the credit, will Jason’s good intentions be corrupted? When the quick-witted Claudia (Kylie Bunbury) has a chance run-in with Mark (Topher Grace) at a museum, he dazzles her with his seemingly miraculous abilities. But after the true source of his charisma is revealed, the encounter takes a dark turn. Written and Directed by Osgood Perkins

Stay-at-home housewife Mrs. Warren (Gretchen Mol) looks forward to acquiring the widely marketed ‘Egg,’ an enigmatic device that promises to make everything better for everyone forever. But further investigation soon reveals the unsavory truth about this mysterious product. CBS All Access also just announced a Twilight Zone digital easter egg hunt. By visiting their partner sites and finding the eggs you can win a lifetime subscription to All Access. More info at twilightzoneeastereggs.com. For a limited time, CBS has made the first episode “Meet in the Middle” starring Jimmi Simpson available for free.

The rest of season two of The Twilight Zone is available now exclusively on CBS All Access. 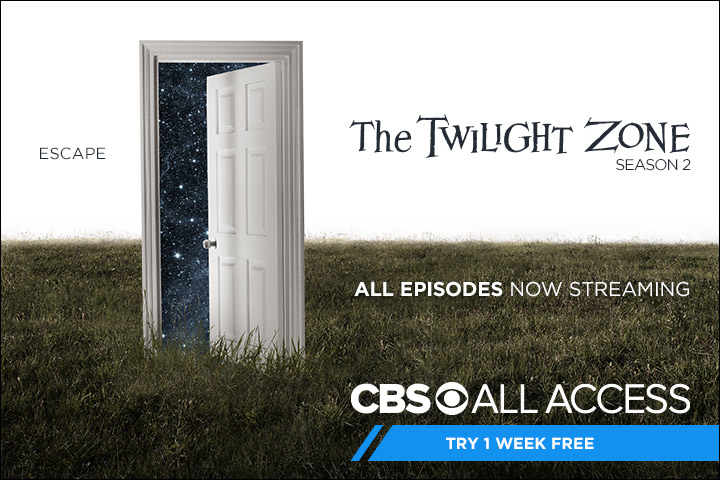 The Twilight is not worth watching. I’ll pass on the one. Season 1 was not memorable.
CBS All Access doesn’t have any good shows to watch other than Star Trek that I care about.

The Good Fight is amazing. Is anyone woman more regal than Christine Baranski?

it’s ok. not every show is meant to be enjoyed by people who pay for a streaming service. it’s supposed to be appealing to all different groups. i dont like the good fight but others do. i like trek but others dont. i have hbo and love curb and veep but dont care about westworld. actually i wanna watch westworld.

I think some of the best television drama stories ever told were told by Rod Serling in the original Twilight Zone. And while I think this update is visually beautiful, I think the stories are mostly lame. I’ve watched the first three episodes, maybe four. I just don’t think it’s that good. Maybe I’ll skip around and give season two a shot.

The original Twilight Zone is one of the most influential science fiction stories ever told. This update doesn’t live up to the legacy of its predecessor. Like you said, the stories are mostly lame.

I’m not watching season two. Foul me once, shame on you.

With that attitude, most Trek shows never would have lasted, as the first season (often, the first two!) were fairly bad.

I’ve not seen the new Twilight Zone at all, but many shows improve over time. If you have some interest, I’d say check out to see if the writers learned from the first season (as the Trek writers often did). Otherwise…why bother sharing you aren’t interested in watching something?

I’ll never understand the internet’s fascination with telling others what you won’t do/won’t watch…cool story, bro?

If you only saw the first 4 episodes you saw the better eps. Believe it or not, the episodes only got worse.

The description of “Ovation” reminds me a lot of an episode of Night Gallery, the one about a bad comedian who gets granted the wish of being hilarious to everyone. Hopefully this is the only remake this season. I mean, if it is a remake. It could be just a similar setup.

His Name Is Rios
Reply to  AllenWrench

Actually, that NIGHT GALLERY episode was the basis of an episode from season one of TZ, so I doubt they’ll do that again this season.

AllenWrench
Reply to  His Name Is Rios

You mean the first episode where the comedian erases people? Yeah, that was a bit different in the end. “Ovation” seems to be going along the too-much-of-a-good-thing theme the Night Gallery episode had.

Anyway, having said that, this looks like a more promising crop of episodes.

Not interested in the Twilight Zone, I want season 3 of Discovery.

Unfortunately one thing this new Twilight Zone is proving to me is the fact that modern television doesn’t really have any good writers anymore. While productions used to be cheap and visually not very impressive back in the day, they did mostly make up for it in tightly written, literal and good stories. It was like you were watching a short story book collection on TV. I think something is missing nowadays, I think the creativity is just gone.

I find it very odd alphantrion that just when short fiction has new life due to ebooks, it seems as though television is weak in short form.

Anthologies should be the natural home for experimentation and spec scripts, but I’m not seeing it, and TW is not the only case

I do wonder if this has something to do with the increasing barriers to spec script writing that have come with serialized series and writers rooms.

It could also relate to some of the issues around agencies promoting a limited group of writers that the WGA was trying to address in the contract recently.

It might also be with high stakes of large production costs and few episodes for anthologies, the studios aren’t willing to take risks.

I concur. In the past the production values were not up to snuff (likely the result of smaller TV budgets and the constraints of having to produce 26 or more episodes in a season) while the writing was generally OK. With the current streaming shows it has been reversed. The writing has gone to hell and all the money is spent on production values.

To be honest, I would rather see a well written story with lower production values than a great looking production with a weak or terrible story.

Like many others I find the new ‘Twilight Zone’ to be boring and at times annoying as it did become too preachy and didn’t let me think for myself.

Not appealing. Not a reason to join CBS All Access. Will pay again as soon as they start showing the new Trek shows.

Someone said Twilight Zone was sci-fi. Episodes are a mix of fantasy, horror, sci-fi, and social commentary. Outer Limits was mostly sci-fi.

I normally check reviews before watch anthologies. I watched 3 of season 1 and liked 2. Reviewers were given three episodes this time, IndieWire has a good review. She says “You Might Also Like” is the best of this series. “Meet in the Middle” is also supposed to be good. More reviews should be out now. Note the vote rigging is a big problem on Imdb now.

I watched “Eight” and thought it was very good.

Yeah… I’m not going to re-up to CBS for this trainwreck of a series. Not if season 1 was any indication of how season 2 will go. Not even interested in seeing that one episode for free. That first season was such garbage that CBS should pay ME to see it.

Binged the whole season a few days ago. I really liked that premiere ep with Jimmi Simpson.
Fantastic acting and I liked the way the story played out completely.

The rest of the season was hit or miss for me, with the Gretchen Moll ep being my least favorite (a twist on To Serve Man) and the ep 8 being a particular fave for me because I love cephalopods.

I didn’t like Try, Try either, because despite it being a sort of takedown of the creepy stalker dynamic of Groundhog Day, it just plain wasn’t written well. I think that was my second least fave.

The rest were just okay distractions.