One of the ways quarantine has been made a little more tolerable was via Sir Patrick Stewart’s “Sonnet A Day” series, which has been on a brief hiatus. But it’s back today, with a bonus of some Stewart news, plus Star Trek’s other captain also has an update for his own quarantine social media series.

In March, Star Trek: The Next Generation and Star Trek: Picard star Patrick Stewart began reading one Shakespearean sonnet each day on social media as a way to help those find some solace and inspiration during the quarantine. In late May, he announced he would be taking a break due to an “exciting new project.” This morning Stewart revealed that project via Twitter, sharing that he is writing a memoir, and adding, “I’ve been thinking for some time about writing down my life stories from my earliest years in Yorkshire onwards.”

In a follow-up tweet, Stewart said that writing a memoir has been “an extraordinary, and altogether surprising process.” He also posted video of a new sonnet, his 64th in the series.

Sitting down to write my memoir has been an extraordinary, and altogether surprising process, and I hope readers will find it equally so. In the meantime, here's where we left off… Sonnet 64. #ASonnetADay pic.twitter.com/tC9QDfRAXy

Even though his character Jean-Luc Picard has his own autobiography, the celebrated 79-year-old actor and knight of the realm has yet to pen his own. Stewart will be joining a long list of Star Trek actors who have written memoirs, including William Shatner, Leonard Nimoy, James Doohan, Nichelle Nichols, George Takei, Walter Koenig, and Kate Mulgrew.

Shatner wraps up his Quarantine logs

Star Trek star William Shatner had his own quarantine series on social media, posting daily “Captain’s Log” tweets. Over the weekend, Shatner concluded the series with the 100th log entry:  “Captain’s Log Stardate 100: I hope you have enjoyed my Captain’s log musings & rantings on the first 100 days of COVID-19 sheltering. It was the least I could do… It was… fun. Oh, my.”

The quote, of course, is a reference to Captain Kirk’s final lines in the 1994 film Star Trek: Generations.

Captain’s Log Stardate 100: I hope you have enjoyed my Captain’s log musings & rantings on the first 100 days of COVID-19 sheltering. It was the least I could do… It was… fun. Oh, my.😉 pic.twitter.com/7s2onUZj0T

And speaking of memoirs, William Shatner’s latest one – Live Long And . . .: What I Learned Along the Way comes out in paperback next week. Check out the TrekMovie review of the hardcover edition. 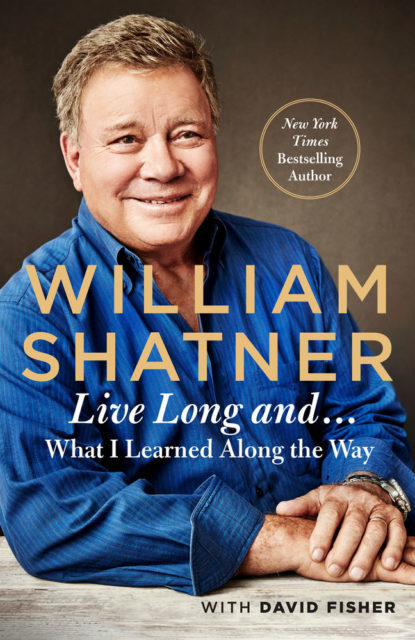 Out on paperback, July 7

Isn’t that supposed to be “1994” Star Trek Movie Generations, 1991 was the date of The Undiscovered Country. How many memoirs has Shatner written?