The newest addition to the Star Trek: Discovery crew was announced today as part of the official Star Trek Day coverage. Grudge Cat, played by Leeu, is the newest in a line of four-legged stars in the Star Trek franchise.

Grudge is a pet of Cleveland “Book” Booker, a new character for Discovery season 3 played by David Ajala. During the Star Trek Day Disco panel Ajala gave a description of Book’s cat:

I can say the Grudge is a queen. She is feisty. She is cynical, cautious, and wary of people. But when she embraces you and it takes you in, she takes you in. It’s tough love! I’ve had to work my way up the ladder.

The official Star Trek Twitter account made the announcement today along with this very cute behind the scenes video: Grudge has some big paws to fill. Other feline characters to grace the celluloid (or tape, as it were) of Trek include Sylvia in cat form and Gary Seven’s cat Isis from The Original Series, Data’s cat Spot (played by several cat actors, both male and female) in The Next Generation, Miles O’Brien’s cat Chester in Deep Space Nine, and Barclay’s cat Neelix in Voyager, to name a few (the complete list is at, where do you think, Memory Alpha). Come to think of it, not having a cat in a Star Trek series is actually unusual. I’m looking at you, Porthos. 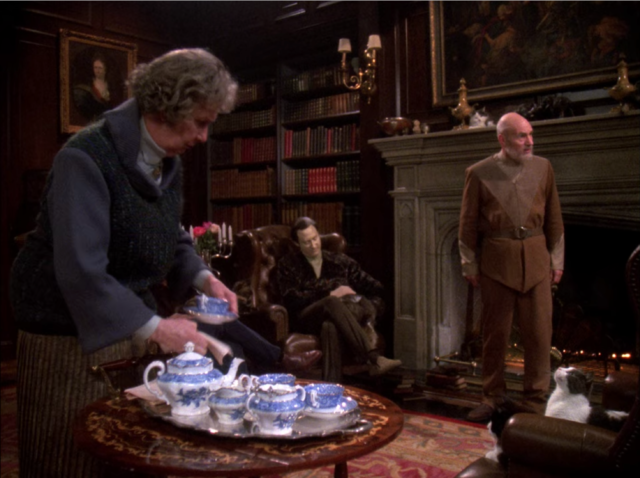 Data with his many cats in “All Good Things… Part 1”. I count at least six.

There is a lot of news coming out of the virtual Star Trek Day. We will have more updates as the day goes on. Keep up with all of TrekMovie’s Star Trek Day coverage.

Interview: Anson Mount On How Every ‘Star Trek: Strange New Worlds’ Episode Is Its Own Story

…I’m all in with a cat for Discovery. With all the Number One the pitbull on Picard promotions, I was always wondering “but where are the cats? Trek always has cats.”

I admit (as a cat person in a household of cat people) that I tend to blur out Porthos in Enterprise.

I think Book and the cat are both holographic lifeforms. Just a guess. Mobile emitters.

Nah. Parasites. Or Suliban. That would be nice.

The cat is the Captain for this season.

Faze Ninja
Reply to  A34

Arrrgghh, mate! Ye best not get on the bad side of Captain Grudge! *chuckle*

JENISHA RANA
Reply to  A34

The cat is so cute. That cat is the baby Yoda of Star Trek!

If the cat isn’t (at least somewhat) evil, I’m not watching.

Lol My cat Winston is a Maine Coon that looks just like that, must sneak out and fly across the country every day to do Discovery shoots.

What a pretty kitty. He reminds me of my beloved dearly departed Coon, Theo. He was such a good boy.

They are surprisingly smart and curious, perfect for Trek!!! Except for the one time they are playing with water in the bathtub and fall in lol But certainly a cat interested in the ripples of water has a place in Trek!

My friend has a maine coon and he is a pain. One minute he’s also friendly and cuddly the next, he’s scratching and being evil.

I’ve always thought that cats basically just tolerate the humans around them. While I’m happy for all the cat fans out there, I miss seeing Porthos.

So I used to be a DIE HARD dog person. Grew up with dogs. I hated cats. But then I was made the owner of one, and now I am 100% converted. They get a bad rap, but they are super friendly, loyal, and cuddly. At least they can be!

I’ve been a cat person most of my adult life, but now it’s a Husky and a Yorkie. Neither are mine, but they are always close by. They’ve earned their keep….

Maybe Grudge will turn out to actually be a humanoid woman. It wouldn’t be the first time that happened in Trek. Or the second.

At least now I have a reason to watch this season.

I was just thinking that myself!

This may be enough to get one of our teens watching again.

They definitely were interested in the photo and the video with the trainer/handlers.

Cool. They picked a good breed. We have five gray tabbys here at home (I call them ‘the houserats’). One thing you’ll note is, Maine coons are exceptionally large domestic cats. The largest, IIRC. No known record of how they were bred, but they’ll easily tip the scales at 20 lbs. for the males, 13 for the females. Known as ‘the gentle giant’ because they’re so relaxed and smarter than your average housecat. The longest one of record was something like four feet nose-to-tail about a decade back.

(Let me amend this: four gray tabbys and a black and white tuxedo cat – all blood related, and Tuxedo Cat is the matriarch of the bunch.)

I have an 8-year-old, average sized b&w tuxedo cat, named Neko. My late wife’s mother picked her out for me in fall 2012, and she’s been keeping me company since, after my wife succumbed to an aggressive brain tumor a few months ago. Neko is a pest, but a cuddler sometimes, too.

Sorry for your loss. These cats came into our lives eight years ago (a lightning-induced house fire killed our Dachshunds and left these cats orphaned, mainly as kittens – long story). We rescued the granny, the mother, and three little ones. Since then, my wife got diagnosed with MS and multiple health issues left me on permanent disability, so sometimes it takes two of us to keep up with them. I can’t really bend or kneel anymore, so I have her unplug their electric water fountain so I can clean it, then she’ll bend down and set it back up for me. We both have issues navigating stairs, so she keeps the litter boxes clean, and I take the used litter bags out to the trash. Feeding depends on who is at one of the six (!) food dishes, fussing about an empty bowl. They all seem to have their own favorite, and would rather starve than move two bowls down. LOL But, it makes the house a home.

Tilly and Grudge’s patterns get combined in the transporter and we’re introduced to Grilly.

Grudge, down is good. Up is no.

I don’t like cats, at all. I think they a poor choice for a pet but this is a gorgeous cat.

At least you can appreciate their beauty!

You do know that disliking cats is just a challenge to them to make you pay attention to them?

They have twice as many facial muscles as humans and four times that of dogs. They can read you, and if you think that they are giving you a look, the most likely are.

Showing them appreciation for their beauty (because they always think they look great) is probably a wise defensive tactic.

So….Book is holding a Grudge?

Come on, someone had to say it……

The Mirror Universe Grudge should be called Mercy.

Ithink Grudge/Leou is cute.
Michael Burnham, For me….. is the most bravest, sacrificial and motivating charector i have seen
She is utterly one of a kind