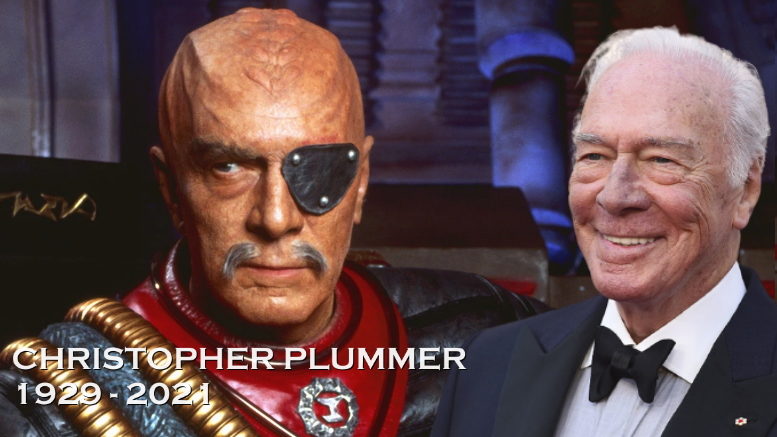 Today legendary actor Christopher Plummer passed away at age 91. According to reports, the Oscar, Tony, and Emmy winner died peacefully today at his home in Connecticut. In addition to his many roles over seven decades, Trek fans remember Plummer as Klingon General Chang in the 1991 film Star Trek VI: The Undiscovered Country.

A Hollywood legend, and a Star Trek fan too

This video from The Hollywood Reporter looks back and Plummer’s career from The Sound of Music to his work in the last decade.

Plummer’s relationship with William Shatner predates Star Trek VI. They go back decades, and their history includes  Shatner being Plummer’s understudy on the stage at Stratford in Canada. In the following clip, Plummer tells a funny story about how he figured out Bill was going to be a star.

Even beyond his relationship with Shatner, Plummer was a fan of Star Trek before taking on the role of Chang. In the video below from Shatner’s Star Trek docu-series The Captains, Plummer talks about how he was a fan back in the ’60s.

Christopher Plummer played the primary antagonist General Chang in the final TOS film, Star Trek VI: The Undiscovered Country. The actor preferred not to take on the typical Klingon hair, resulting in him having a unique look for Klingons. Fitting well with his roots as a Shakespearean actor, Chang was also fond of quoting the Bard, as can be seen in the climactic battle scene below.

Plummer reprised the role of Chang for the 2000 video game Star Trek: Klingon Academy, which also explained how he lost an eye. The video below shows the intro to the game.

William Shatner has offered his thoughts on the passing on Twitter, in a thread, which reads in full

A gentleman whose name is Christopher Plummer died today. He was what I call a friend. What is the definition of a friend? Somebody you know intimately whose every breath and every thought that is so much like yours or can a friend be someone whose life is intertwined near and afar with great gaps of time between meetings? That was the kind of friend Chris Plummer was to me. I think the final picture of our friendship was in a documentary I was making in which I interviewed him at a theatre that we both played at the Stratford Ontario Festival. We spent the afternoon laughing and rejoicing in our mutual experiences. That afternoon defined my friendship with Chris. I am so sad to lose him. My best, Bill

A gentleman whose name is Christopher Plummer died today. He was what I call a friend. What is the definition of a friend? Somebody you know intimately whose every breath and every thought that is so much like yours or can a friend be someone whose life is… pic.twitter.com/VodBKXm5Uz

Discovery and Strange New Worlds star Anson Mount shared some personal memories he had with Plummer.

Man, the hits just keep on coming. I had the extreme pleasure of working with Chris. Committed, imaginative, thorough in his preparation, and an absolute gentleman every step of the way. I’m very sad to learn if his passing. He will be missed mightily. https://t.co/0P4bUBjOow

Star Trek movies actor Simon Pegg shared a clip from the film Hector and the Search for Happiness, in which he co-starred with Plummer.

We're saddened to hear of the passing of Christopher Plummer. A true legend, and one that left a mark on our franchise with an incredible villain in General Chang. RIP. pic.twitter.com/Pgo0i9q5Mw

DS9’s Chase Masterson weighed in with her thoughts on Plummer’s work in The Sound of Music.

Because Sound of Music was so beautiful in endless ways, I think we forget what a powerful statement it was.

What an important role Captain Von Trapp was. A man who could’ve made the worst choices, but made the best ones.

Other Star Trek celebs including George Takei have been retweeting condolences and memories of the legendary actor.

The Sound of Music is a sad one today as Christopher Plummer has left us today. He was giant of stage and screen, winner of an Academy Award for “Beginners.” He died at age 91 with his wife of 53 years, Elaine Taylor, by his side. Rest in eternal music, Captain Von Trapp.

This movie holds us in it’s magnificent hands and unforgettably takes us away, into the lives of the Von Trapps. It is seared into my heart. Thank you and rest peacefully. #TheSoundOfMusic @JulieAndrews https://t.co/hiq17bH8Ls

I will never forget meeting #ChristopherPlummer very briefly one chilly fall evening in T.O. A very young #JaimzWoolvett & I were filming a scene in the entrance of the @SuttonPlaceHtl We held the doors for him as he entered the hotel. We were awed.
#RIPChristopherPlummer https://t.co/vZMJkY69PA

This was not the news I wanted to hear today. :0(

So lucky to have Star Trek VI. even more special now

Loved him in Knives Out. Perhaps his last film?

According to IMDB he has a film last year “The Last Full Measure”, and another that is currently filming, “Heroes of the Golden Masks.” ST6 aside, I will always remember him in 12 Monkeys, one of my favorite sci-fi films.

Thorny
Reply to  the new kid

The Last Full Measure was a little later, I think.

Andy
Reply to  the new kid

He was so so good in Knives Out.

Too many fine actors have passed away recently. When I read the news this evening, I was thinking to myself that he had already passed. I got him mixed up with Max von Sydow, who is the same age and passed away last year.

Of course, his role as Gen Chang in STVI is memorable and the movie was a satisfactory, but not exactly satisfying ending to the TOS movie era. My initial reaction to the Chang character quoting literary lines during the heat of battle as incredulous, if not maddening. To be or not to be…I mean..really? Who does that?

Obviously, the literary quotes were there for the entertainment value and presumably because Nick Meyer was involved.

With that said, it could be motivational to a Klingon serving under him. I mean, I got some goose bumps the first time I watched him deliver, “Cry ‘havoc!!!’ and let slip the dogs of war!” If I was a Klingon, I might feel motivated hearing my commander scream Shakespeare in the heat of battle, especially in its “original Klingon.” Personally, I would probably think he’s a total maniac, but Klingons are maniacs in battle.

I think Trek 6 is one of the more self aware Trek movies, with Chang being something of a caricature of Klingon culture. It certainly was heavy-handed writing, ofc. But I love the way he chews the scenery and I think his acting is the reason I enjoy TUC so much.

Shakespeare does sound best in the original Klingon.

The whole Shakespeare is Klingon thing is Meyer mocking Germans, for the importance Shakespeare has for German theater. Germans called Shakespeare the third German Classic. But even Vanessa Redgrave’s father found that King Lear sounds better in German than in English.

I agree with you all. Only a handful of actors could deliver those Shakespeare lines and do it with some..some credibility. Can you imagine the Kirk character spewing that in battle..’tickle us…that we don’t …buh-leed (in typical Shatner rhythm). :) :)

I have to watch “Cross of Iron* again Maximilian Schell’s character was a jerk who would be able to do things like that. Also the movie has David Warner in it.

I know he really didn’t like The Sound of Music but it is my favorite movie ever, and I’m not embarrassed to say so.

I had been hoping for years that William Shatner would have been able to get Christopher Plummer to join him at one of the Las Vegas Star Trek Conventions so we could enjoy the chance to see their friendship together on a stage for an hour.

A singular talent.. May he boldy go…

I have my own personal Christopher Plummer story. In 1980, I attended a Genie Awards party. They are like Canada’s version of the Academy Awards. The post-awards party was held at the Sutton Place Hotel in Toronto. My buddy and I found ourselves chatting with Chris Plummer. It was one-on-one, just the three of us. Now, here’s the thing. You were allowed to smoke cigarettes indoors back then. Plummer was trying to quit, but seeing my friend puffing away, said he really felt like one. My friend had a full pack on him, and kept slipping one to Chris. That one simple factor kept the three of us chatting for the next two hours! What a conversation! I didn’t know at the time, but Plummer had just finished filming Somewhere In Time, one of my favourite movies (would have loved to talk to him about it). I can tell you, Christopher Plummer was so down to earth and friendly to both of us.

Many years later I had front row seats to see his one man show of “Barrymore” at the Elgin Theatre in Toronto. What a great performance!

There’s a photo I saw on twitter with Plummer smoking a joint with Nic Meyer on set of Star Trek VI. A whole different world back then I guess lol

A great story and a memory to cherish.
I live in Brantford, about 100Km west of you.
Do you still live in the Greater Traffic Area?

Thanks, dennycranium. Yes, I live in Leaside in Toronto.

A Great Actor.
A Legendary Career.
Rest Well Sir.
YOU EARNED IT!

This is a tragic loss, he was great in Star Trek VI. I also highly recommend the PC game “Klingon Academy”.
Also someone needs to remake Counterstrike, that was a great TV show. Mission Impossible meets Tony Stark Avengers.

A tremendous talent and an example of how great the skill of acting can be.
I remember fondly a clip of him saying how much a fan he was of DeForest Kelly. That DeForest could do so much in any scene he was in. Coming from an A-List actor held in such high esteem in the industry it was so rewarding to hear accolades about one of my favorite Trek actors.

Proof of his superb acting talent also included when he replaced Kevin Spacey in “All the Money in the World” at the last minute and was nominated for an Academy Award for that performance.