Star Trek’s first animated adult comedy is headed home. Today CBS Home Entertainment and Paramount Home Entertainment announced the first season of Star Trek: Lower Decks will arrive on Blu-ray and DVD on May 18th. There will also be a Steelbook special edition. We have all the details on the release, which includes nearly two hours of special features.

Even though Star Trek: Lower Decks was something completely new to the franchise, it proved popular with fans and garnered positive reviews in the media as well as here at TrekMovie.com. The love for Star Trek from series creator (and two-time Emmy winner) Mike McMahan shows through all ten episodes of the debut season.

Set in the 24th century after the events of Star Trek: Nemesis, the animated comedy introduced us to the USS Cerritos, one of the “least important ships in Starfleet.” Leaving the glamourous missions to the other ships, the crew of the Cerritos focused on “second contact.” 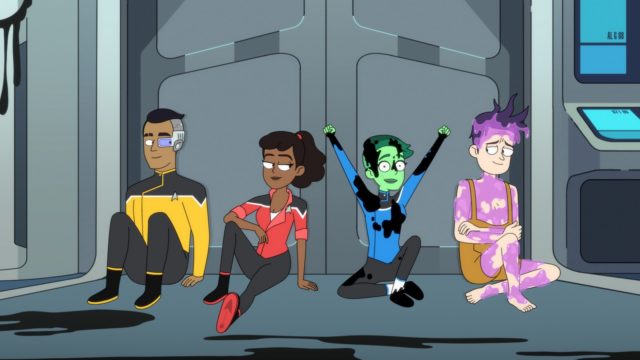 The DVD and Blu-ray releases are packed with special features. A highlight is “Lower Decktionary,” a multi-part exploration of the series’ music, art design, animation process and more. The collection also features exclusive interviews with the voice cast, deleted and extended scenes, and a “fan-forward exploration of the series’ many Easter eggs.”

The Blu-ray, DVD and limited edition Steelbook offer fans all 10 episodes from the debut season and nearly two hours of exclusive special features including:

Coming to Blu-ray and DVD and Steelbook

Lower Decks arrives on home media on May 18th. You can pre-order Blu-ray edition at Amazon for $31.99. The limited edition Steelbook Blu-ray set can be pre-ordered at Amazon for $37.99. And the DVD edition can be pre-ordered at Amazon for $25.99. Finally. Now where is the Eaglemoss Cerritos?

Cool. I’m not a big fan of that show but I want all Trek on BD… Still waiting for DS9 and VOY…

The one thing that would be even better is a soundtrack release (CD or download)… The score of LD is really neat. Not as good as The Orville but in that vein…

I would love to dive into those special features!! They put so much effort into this show and, well, it shows.

The special features have to be very, very good to justice the asking price really.
It would be easier and cheaper to subscribe to Prime for a month and watch all the episodes in about a week or two max.
Just an observation though.

Its great that physical discs do still get released and long may it continue.

I may only laugh two or three times an episode (if that!) but I’m still glad this show exists. It’s such a comfortable, cosy watch for a long time fan. The more references the merrier I say. This may well be my first blu-ray purchase of this new era of shows.

That’s a lot of extras.

I tend to lean towards waiting the multi-season sets to become available, but this might just tempt me.

LDS is easily my favorite Trek show out of the new stuff! If I still bought discs I would happily buy this!

Still waiting to hear when season 2 will drop!

So many crazy adventures. Ha. What a crazy bunch of nutters. Ha. Make it so… obstreperous. The best part was when the dog turned into a cube etc.

I don’t understand why they feel the need to put more bonus features on the steelbook. People already pay more for steelbooks just because they like steelbooks; there’s no need to bilk them.

I went back but can’t find what you’re referring to. Does the steelbook have features the other version don’t?

Maybe I misread — I could have sworn that when I read it, it said that the steelbook has exclusive bonus features. Which I think was also true of Picard season 1.

If so, I’m happy to have been wrong!

I found this show somewhat annoying