We are living in a great time for Star Trek documentaries. Earlier this week we reported on the new Voyager doc breaking crowdfunding records. And today brings news that the History Channel is doing a full series all about the 55-year history of the franchise.

The “ultimate” history of Trek

The Nacelle Company, producers of popular documentary series like The Toys that Made Us and The Movies That Made Us, is taking on the final frontier. Today they revealed they are working on an 8-part series titled The Center Seat: 55 Years of Star Trek for the History Channel. The series promises to do the deepest of dives into the world of the Star Trek franchise. According to the announcement, The Center Seat will be “the ultimate Star Trek documentary that everyone has always wanted, and now they’re getting.”

Each episode of the series will focus on a different chapter in Star Trek history, starting with the inception of the original Star Trek series at Desilu. The doc series will feature interviews with people who worked on the show in front and behind the camera, as well as experts. The Nacelle Company promises The Center Seat will “reveal never-before-seen backstage stories and offer fresh insights” with “no stone is left unturned, including lesser known aspects of the franchise like The Animated Series and Phase II.”

The new Trek docuseries was created by Nacelle CEO Brian Volk-Weiss, who will also serve as director. “Star Trek, from before I was ten years old, gave me the closest thing I have to a code to follow in my life. If it wasn’t for the words ‘I don’t believe in the no-win scenario’ I’d be very alone, broke, and miserable in this world. So to say this is a passion project would be a tremendous understatement.” said Volk-Weiss in a statement provided to TrekMovie.

In 2016, Trekmovie interviewed Volk-Weiss for his previous Trek documentary for the History Channel, 50 Years of Star Trek. Volk-Weiss told us then that he wished he’d had a whole hour to go into Lucille Ball’s contribution to the very existence of Star Trek, so that’s likely a subject the doc will explore. He also told us that his interview with Leonard Nimoy—the last one ever done with the actor—gave him “one of the greatest moments in my entire life.” 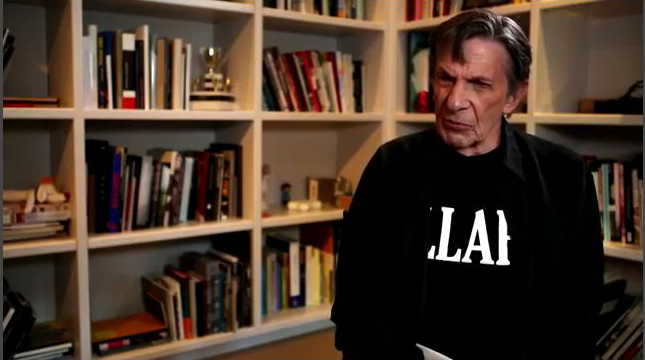 Leonard Nimoy in the documentary 50 Years of Star Trek

There are some other familiar faces working on this exciting new project. One of the executive producers for the show is Mark Altman, co-host of the Inglorious Treksperts podcast and co-author of The Fifty-Year Mission: The Complete, Uncensored, Unauthorized Oral History of Star Trek. And Star Trek: The Next Generation castmember Gates McFadden is also one of the executive producers for the new docuseries.

No specific date on when the series will be released, but the announcement indicates it will be timed to coincide with Star Trek’s 55th anniversary, so it seems likely to debut in September 2021.

As Tony and Laurie mentioned in the podcast after the Paramount+ launch, aren’t these kinds of documentaries in the Smithsonian Channel’s wheelhouse?

It seems really bizarre that this is going to the History Channel, a Disney outlet, rather than ViacomCBS’ own platform.

Or PBS, which had an excellent series called Pioneers of Television several years ago. History Channel actually doing a show about history? Wow, and here I thought they’d purged all that so they could show us more shows about flea markets and swamps.

History (They dropped the “Channel not long after SciFi became SyFy) tries to do one or two new actual documentary or docudrama projects per quarter; depending on budgets and production schedules. They usually run on Sunday nights in Prime Time. The second season of The Foods That Made America (about the mass market and fast food brands that gave America a common thread as it became a highly mobile society) is airing.

I’m super excited, but I don’t see how they can fit all that into 8 episodes and still call it the ultimate Trek documentary. Some Trek shows will be getting short-changed.

I’m sorry they’re starting this series after so many of the makers of TOS — Roddenberry himself, Bob Justman, Dorothy Fontana, Herb Solow, and so on — are dead, since without them, their history of TOS will be incomplete. Still, I’m glad to hear that a comprehensive documentary of Star Trek is in the works.

Eric B
Reply to  Corylea

“Inside Star Trek” which was written by Herb Solow and Bob Justman goes very deep into detail regarding TOS, from the first time that Herb Solow met Roddenberry, to “The Cage” pilot, and all the way through the ending of the third season of the show.

Corylea
Reply to  Eric B

Yep, I’ve read it. But it doesn’t contain interview footage, so someone would have to read aloud from the book or summarize it, to get that stuff into a video documentary.

There is interview footage used for OS blu rays.

They’ll probably take snippets of interviews these people did for the Academy of TV and film over the years (you can find them online – and in them they are asked and go into a lot of detail about their involvement with TOS.)

I’ll be happy to watch it.

5 years late but better than never.

Will CBS/Paramount allow them to use actual footage from the shows and movies, or will this be another one of those lousy documentaries that just shows still photos and uses bad sound-alike Star Trek music because they didn’t get the rights?

CBS seems to understand, that not fighting fair use clips in other people’s for profit documentaries is free advertising for their product, so they probably won’t have any issues. Nacelle producing the series won’t hurt either. Their Netflix series have reportedly earned them a lot of cache in Hollywood.

I would imagine that’s just a question of the right price. If the doc wants to license footage from the shows and movies they will have to pay a license fee. I can’t imagine CBS/Paramount will block it if there’s money to be made.
I mean it’s similar with the Voyager Documentary: They’re using some of the extra fundraising money to license footage and original music from the show.

Sounds great! It looks like Star Trek will have a bigger 55th anniversary than 50th. I wonder how far will it cover? I’m guessing through Enterprise but maybe will include the Kelvin movies as well.

I believe Les Moonves is the real reason to have a bigger 55th Anniversary. I am glad for everythying that is happening. And I agree, Lower Decks was the big surprise and I have a feeling Prodigy will be amazing as well.
Makes sense to cover through Enterprise. But after 3 Kelvin movies, 5 shows in production, and a movie reboot in the upcoming years (?) is hard to ignore, not cover where the franchise is heading in the new decade! :P

Yeah, LDS easily seem to be the stand out star of the new stuff right now. AGAIN, it doesn’t mean everyone loves it (we’re still talking about Star Trek fans lol) but it seem to be the least divisive one, definitely on these boards at least, and really represented a lot of the best parts about classic Star Trek. Being episodic alone was great to have again! I can’t wait to rewatch it.

I’m equally excited for SNW and Prodigy! SNW hopefully will capture more of a TOS vibe or at least give us some fun adventures aboard the original Enterprise again. And Prodigy will bring back Janeway and get to have something for kids. I’m hoping that will just be a fun adventure show as well. And MAYBE aboard another Voyager (there are 11 of them now ;)). And I have a feeling we will see both more TOS and VOY characters pop up on both shows in time.

But yeah it’s a great time to be a fan. I can be just as pessimistic and cynical as everyone else, but I always look ahead and just imagine how great the possibilities can be. Hopefully it’s going to be so much fun with all the shows coming and exploring everything from the 23rd to the 32nd century hopefully within the year! And we still don’t know when Prodigy takes place. Just insane!

You are absolutely right. Amazing how LDS they got it right, right from the start!? This show is here to stay. I am sure we will see an animated or real life movie. It is the perfect continuation during the time of STNG, without the restrains from the Bernam era. :P

It’d be weird to celebrate 55 years of Star Trek by only covering the first 39 years.

Yeah you’re right, but we had the 54th anniversary last year with CBS having special events with all the shows and the Kelvin movies were totally ignored. And yes the companies had already merged again. I just worry they may get left out of this. For some reason, they just seem to feel more disconnected these days from the rest of the franchise. Hopefully that won’t be the case! I want them represented more too even if certain fans want to forget them.

Mark Altman is OG Trek lore; the successor to the David Gerrolds of the Trekverse, the Bjo Trimbles; fully conversant in 80s cultural moment. So many good articles in genre mags, and the short lived Sci Fi Universe, excellent. So glad he’s around.

I hope this show will be on some streaming platform. The obvious is Paramount +. Here’s hoping since I unplugged years ago.

As long as it will still be available on History I will be happy.

Besides, Isn’t History, along with a number of the other cable channels putting their stuff on some new streaming service anyway?

Hope being in the UK I’ll be able to find it out.

Eight parts, though. So I’d amend your layout to be like this…

I’d like to see DS9 get its own episode, but I don’t think that’s “in the cards”.

Nice subtitles for each part

If feels like nearly everything that can be said about Star Trek has already been said. However, if this thing can unearth some new tidbits never revealed before, more power to them. I’ll certainly be checking it out.