As part of a gallery exhibit at the Mission Chicago official convention this weekend we got our first good look at the new Starfleet gear the crew of the USS Enterprise will be using.

Previously most of us assumed Strange New Worlds would be re-using the 23rd century props from Discovery, maybe with a new paint job or a few other tweaks. Over the course of the last few weeks however it has become clear that the production team decided to put their own spin on each of the three classic “landing party” props.

The new phaser is quite reminiscent of the TOS design, but with sleeker lines. It retains the light-up adjustment knob at the rear of the pistol body from the Discovery phaser. The emitter nozzle is now silver, and instead of the three different beam emitters (ala “The Cage”) seen in Discovery, we can see the move towards a single emitter. The grip has been streamlined from the very “tactical” look in Discovery, but still has more of a gripy look than the very smooth TOS version. Lastly, the trigger is closer to the Disco phaser than the smallish metal rod trigger found in the TOS version. 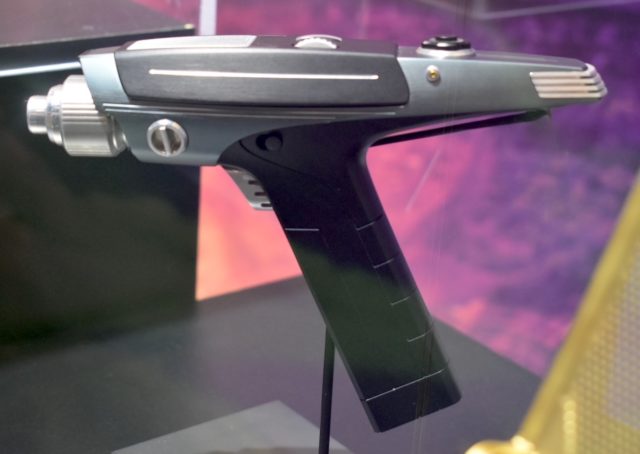 Here’s a look at the Discovery and The Original Series phasers for comparison: Another very retro inspired prop, this new Tricorder looks quite similar to the TOS prop, but changes the way the screen is revealed (it no longer pops up by rotating the top portion), and now the extra functionality is part of the flip-out door, rather than hiding in the rarely seen in TOS lower compartment. Here’s a look at The Original Series tricorder for comparison: The TOS tricorder with the lower door open

We already caught a few glimpses of the new communicator, as it was quietly slipped into Discovery season 4, and then featured in the first Strange New Worlds teaser trailer. It’s quite reminiscent of The Original Series prop. Here’s a look at The Original Series communicator for comparison: The classic communicator from TOS

New to the show are a selection of pins commemorating lost ships. The size and design is reminiscent of contemporary challenge coins. Among the ships in the display were the USS Discovery (remember in the 23rd century the Discovery is considered destroyed with all hands lost) and USS Shenzhou. These have been glimpsed in the promos that were released late last month. An elaborate Vulcan “betrothal” pendant, and a “Vulcan scroll” were on display between costumes for Spock and T’Pring. Note that the “Vulcan scroll” does not feature Vulcan writing, it appears this alien artifact may have been mislabeled as being Vulcan. Some of the photos in this article were provided by friend of the site Marina Kravchuk.

More to come from the exhibit

We’ll have an article with a focus on the costumes on display in Chicago soon.

Locutus
Reply to  Will

Agreed. They’ve done an excellent job. I’m really surprised by the Tricorder especially. I would have struggled to even tell the difference between the phaser and communicator and the TOS versions. Guess Wand Company better get busy with Version 2.0 of their Tricorder, assuming they ever put out the TOS Classic ;-)

Does anyone know what’s taking so long? They stopped with the monthly updates altogether. I have my $300 saved up.

Still kick myself for not getting the phaser when I had the chance, but that communicator gets a lot of use and I still squee when I use it as a handsfree speakerphone.

Wow this is really bringing me back to TOS! Almost here kids! :)

That Vulcan text does not look like the Vulcan language as previously shown.

You’re right it’s not. They mislabeled it. It’s alien, but not Vulcan.

So is this the official confirmation that T’pring is in the show? I guess so.

She was shown in the spot featurette.

But was it officially stated in the trailer that it was Tpring or were we to assume it was? I don’t remember Spock specifically mentioning her name.

It was officially announced last July that Gia Sandhu would be playing T’Pring in 3 episodes.

Given all the other mistakes they’ve made during the con (like putting up the wrong promo posters for Spock and M’Benga and, apparently, mislabeling a scroll as Vulcan that doesn’t have any Vulcan symbols) I wouldn’t be so sure.

The nacelles are ALL WRONG.

TheralSadurns
Reply to  Marvin the Martian

Yes. The nacelles ARE all wrong. It made no sense to go with a swept design and with the holes. Doesn’t even make it more modern looking or anything. It’s just wrong.

I was so looking forward to SNW, then I saw the nacelles. I’m OUT!

It’s not just the struts of the nacelles. It’s sickbay. It’s the second turbotlift on the bridge.It’s the white medical uniforms. It’s the complete lack of respect to the visual canon. Stop messing with the 23rd century, at least Discovery moved into the future!

Maybe towards the end of the series, the ship will go through another refit and get the straight nacelles.

You mean that Kirk will see them and then send for Scotty to do conversion therapy on them?

That makes zero sense. We’ve already had The Cage occur. The straight nacelles are there already!

A Name of Some Sort
Reply to  Marvin the Martian

If you’re going to mock others opinions at least mock the correct complaint- The nacelles were fine. It’s the swept back struts which were wrong.

A close up of the tricorder has an actual LED screen with data on it.

Where? All I see is a blank screen.

I went to Mission Chicago this weekend and can confirm, it was a medical tricorder with the TOS graphics on the screen

The Vulcan Scroll is placed into the adjacent receptacle and placed into a vacuum tube. This is how Vulcans performed drive-up financial transactions.

Now that comment was very funny, and a welcome thing to read as I wake up and sip coffee! I was thinking of the tube systems in THE SHADOW and BRAZIL, but your comment took me all the way back to my youth in a big way.

More on topic, I’m stunned at just how inelegant the SNW tricorder looks, mainly around the edges. I always thought the original resembled my grandmother’s portable AM radio, but no — this actually looks like an AM radio, as in, it doesn’t look designed at all — more like somebody found an existing period shape and bolted junk on it — with the edges just looking particularly clunky.

In Trek history terms, I’d say it rivals the fail of all fails, the 09 water hose phasers, which just look like somebody slapped brass fitting from their garden shed on an incomplete gun shape. (well, to be fair, I also hated the TMP tricorder, because it just looked like a toy, and wasn’t much impressed with the TMP phasers either, though sketches for phaser alternate ideas by Brick Price looked really hot.)

ST:TSFS had better phasers and tricorders. I’m not sure what they were thinking for ST:TMP and ST:TWOK. The TSFS ones looked like actual updates to the TOS ones.

Very nice, though would have liked them to have produced the see-through communicator as seen in The Cage; that was one of the coolest Trek props ever devised and is appropriate for the Pike era.

These are excellent. Faithful to cannon.

JTP
Reply to  Bird of Prey

Ray
Reply to  Bird of Prey

Those look great. Same goes for the new uniforms. Nice to finally see some quality work out of wardrobe and props on one of those new shows.

The “problem” is, that now they don’t really fit in with the redesign of the ship. But if that’s the biggest problem, I can live with it 😁

totally unrelated, but a funny about possible future versions of DS9 and VGR: https://www.extremetech.com/extreme/333517-paramount-announces-demastered-edition-of-star-trek-deep-space-nine-voyager

It was an April Fool’s joke. But I was fooled until about halfway down when I first read it.

I know they wanted to stay true to TOS styles, but that Tricorder’s tiny viewscreen has always seemed hopelessly impractical to me. Even back watching TOS as a kid in the ’70s, I was thinking “how is anyone supposed to read that thing?”

You could always rationalize that the little screen projects itself onto the device-holder’s eyeballs.

Sure, I have a Galaxy Watch and it is nice. But really, a line or two is all it displays (the name of an incoming caller, text or email, or how far/long I walked) and that’s about it. That little Tricorder screen would have to be itty bitty fonts for Spock or Chekov to read off the things they say it shows them. :-)

People watch LAWRENCE OF ARABIA on smartphones, but I sure don’t think of it as a sign of being smart. Why not conduct a class on pointillism through monitors the size of your baby boy’s wee-wee?

About 13 years ago, I tried watching a Bond movie on a laptop. After 10min, I just skipped to the action, because the subtle bits (and there were a few, it was a Dalton movie) were invisible.

40 years ago we watched our stuff on VHS and suffered the image compromise associated with same because short of revival houses, it was the only game in town (till laserdisc, anyway.) Watching a feature on a phone today in an era of home systems that seem to outstrip many theaters would be a backwards-stepping choice that rivals choosing conveniently-available kinescopes.

In fairness, I feel like the TOS tricorder screens are bigger than the TNG ones. DS9 and VOY got bigger screens I think.

Seems like SNW is set in 2259 then… did we know this before?

Know? No. But I think that was inferred.

Cripes. Even I think these props look fantastic.

Very nice, showing respect as to what came before. Well done.

Phaser: Very cool and retro. Although I did like the Disco tactical grip better. But the SNW phaser is a nice update to the TOS one.

Tricorder: like others have said: screen is too small. Yes, the TOS had a small screen, but I think a nice update would have a screen pop up from it, kind of like the Prodigy tricorder.

Other than those nit-picks, these look great. Now I just hope the stories are good! The fact that Akiva Goldsman is writing most of the episodes had me worried. I think they should reach out to current sci-fi authors for stories, sort of like what Gene did in the 1960s.

It is to dream.

Oh if only. I would so like to see guys like Andy Weir or John Scalzi writing for Trek.

I loved The Martian and Project Hail Mary. Artemis not so much. Never got in to Scalzi.

The writing is Exactly what I’m worried about here, not production value, which has always been great with these new live-action shows. I agree, get some actual sci-fi writers in there to tell some stories.

Like it or not the props must remain true to the established visual canon. I do share your concerns about Mr. Goldsman, he is not a very good Star Trek writer, I am sure he would do fine with a non-established franchise.

He’s supposed to be doing MAJOR MATT MASON for Tom Hanks, who used to work with the awesome Graham Yost (BOOMTOWN) on the same project. That’s like starting with Gene Coon on your script and winding up with whoever wrote LOUD AS A WHISPER and SAMARITAN SNARE.

Only complaint (because we can’t have nice things) is that the Type-1 phaser isn’t as sleek looking as the TOS one. Otherwise, these props look fantastic!

Ok, the phaser and communicator- THAT is how you update it but still have it look “Correct.” Well done, design team behind those.

ray
Reply to  A Name of Some Sort