With just two days left to go in their crowdfunding campaign, TOMY’s die-cast TOS USS Enterprise replica project has surpassed their revised financial goal. And there is still time to pick up what is a unique Star Trek collectible. TOMY’s crowdfunding campaign has reached 106% of their financial goal so far!

The campaign started on June 6, 2022, with a goal of 5,000 backers and a total of $3 million in funds needed. If that goal were not raised, backers’ credit cards would not be charged, and the project would not move forward. While the campaign has engendered a great deal of enthusiasm since then, the number of backers and the amount pledged failed to meet the goals in time. In response, TOMY extended the one-month deadline by two weeks, and lowered their goal to 2500 backers and $1.5 million, and then recently lowered it again to 2000 backers and $1.2 million pledged. That final revised financial goal has now been met and surpassed, though as of this writing, the number of backers has only reached 1842, likely because some backers purchased multiple units. A recent email to backers still indicates that they need to reach 2,000 backers in order to move forward. 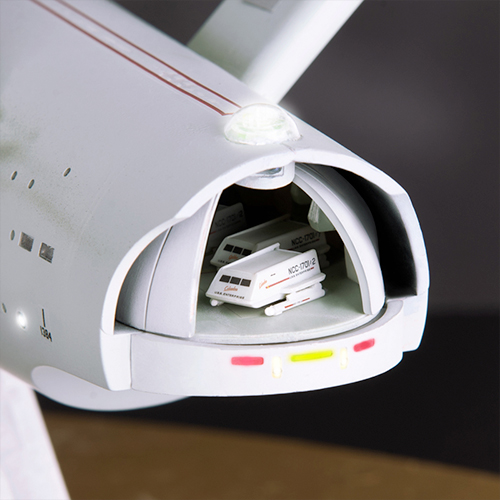 The sheer enormity of the model and its reasonable price tag have made this project unique. Its 1/350 scale, identical to Polar Lights’ plastic model kit’s dimensions, means that the TOMY die-cast replica will clock in at 34″ in length and over 20 lbs in weight, fully assembled. The replica will come fully painted and detailed, will require minor assembly, and will be outfitted with realistic sounds, lights, and motor effects, triggered by invisible switches on the primary and secondary hulls. The replica will include three shuttlecraft models, decorated to match three of the TOS shuttles, and a stand that is capable of supporting the model in both joined and separated modes because another unique feature of this replica is that the primary and secondary hulls can be displayed either joined together, as shown on the TV series, or separated at the neckline, as referenced in dialogue in TOS and described in the show’s writer’s guide.

Here is a video of the prototype in action:

Each unit costs $599 apiece, including shipping anywhere in the contiguous United States. The replica is expected to be shipped to donors by summer 2023.

Visit the campaign webpage at https://startrek.tomy.com.

20 lbs of glorious die cast Starship! I backed this project happily. I have no idea where I’ll put the damn thing, but that’s a matter for another time.

I might back this if the ship didn’t have that “rusty” look, which is simply a personal preference. Was that part of the original studio model?

Don’t get me wrong, this is an incredible build that I absolutely want. I just can’t swallow $599 of anything unless it is EXACTLY what I want. I’m so happy to see them reaching their goal!

Yes, the original studio model was painted with rust streaks and a “rust ring” around the forward section of the primary hull. The Smithsonian has the studio model and recently restored it to as close to its shooting condition as possible, based on exhaustive research, and it features the rust streaks and rust ring. The TOS Enterprise was described in the writer’s guide for the series as a ship with history, and the paint job reflects that.

Yes. The 11 footer was heavily weathered and had that rusty color on the exact areas this has.

In space, no one can hear you scream. Or make any other sounds, for that matter.

I doubt that many people will display this in space ;-)

Sorry what I meant to say, Article above states “Realistic sounds”. The lead designers stated the model will NOT have sounds.

All due respect, I personally think this is a waste. While certain aspects are really cool, like the working shuttlebay doors, for a collector item this thing looks way too toy like, some of the weathering and colors are slightly off, and more than anything the price is insane, especially the way the world is right now. Plus there was no need for this to be mostly diecast.

Not gonna throw shade at those who backed it, but I personally am more than satisfied with my PL kit that I put my heart and soul into making the best model build I have done to date.

The advisor on this model is the man who restored the original TOS model at the Smithsonian. You can’t get much more authentic than that, homeboy.

Yeah, and the model in the Smithsonian still kinda looks like a toy, because… that’s what the danged thing looked like!

Always someone who complains? Purchasing 3 and already have 2 sold to collectors overseas which makes mine FREE. “Admiral on the bridge!”

The price is insane? $599 for a die cast, 1/350 scale model with lights is somehow too high for you? Polar Lights sold an assembled version of their kit, with no lights made of plastic, for more a few years back. The official lighting kit alone for that kit is $225.

That’s funny. I bought it precisely because it doesn’t look even remotely toy-like.

Shame they limited it to the contiguous US only.

Had no clue about the rust on the ship being on the original paint job. Fascinating!