On Tuesday night, the Academy of Science Fiction, Fantasy & Horror held its 50th annual Saturn Awards. Three different Star Trek shows went into the evening with a total of six nominations across five categories. The ceremony ran until after midnight and the franchise came away with a single win for Star Trek: Strange New Worlds.

The first season of Star Trek: Strange New Worlds won for Best Streaming Science Fiction Series, beating Star Trek: Discovery along with The Expanse, For All Mankind, Lost in Space, The Mandalorian, and The Orville: New Horizons. On hand to accept the award were co-showrunners Henry Alonso Myers and Akiva Goldsman along with actor Ethan Peck (Spock).

Strange New Worlds is the third show in the franchise to win a Best Series Saturn Award, joining The Next Generation and Discovery. Winning the Saturn Award is the second major accolade for the freshman season of Strange New Worlds after being honored with the Legacy Award by the Hollywood Critics Association over the summer.

Star Trek: Lower Decks was also nominated for a Saturn for Best Animated Series, but it lost out to Star Wars: The Bad Batch. 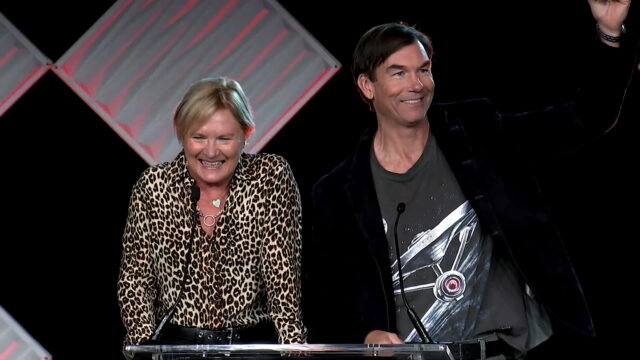 Denise Crosby and Jerry O’Connell present at the Saturn Awards

The ceremony also featured a nice tribute to the late Star Trek legend Nichelle Nichols, introduced by Star Trek movies writer and director Nicholas Meyer. It included video from the International Space Station and NASA astronaut Jessica Watkins. Also beaming via video to offer his congratulations and thanks to the Saturns on their 50th anniversary was Star Trek’s William Shatner, who recalled his infamous rendition of “Rocket Man,” performed at the Saturn Awards in 1978. A full list of winners will be available later on Wednesday at saturnawards.org.

Some stiff competition there with The Expanse, Mandalorian and Orville. Good for them.

It’s not my favourite of the new batch of shows by a long shot but I’m super thrilled for them all the same!

There is no denying that SNW is a great show that deserves it’s win and It’s great seeing a Star Trek show get the recognition it deserves at awards ceremonies.

While SNW is my least favorite of the current shows that doesn’t stop me from finding it a great Trek show that I enjoy And does the franchise justice.

I’m also happy that SNW will join Discovery as being recognized as some of the best Sci-fi shows we have had In recent years.
It truly is a great time to be a Trekkie with all these great shows currently airing and all doing fantastic.

Glad Strange New Worlds won. The Cage is redeemed after being rejected in 1964.

Does anyone here watch For All Mankind? It’s Ron Moore and SF at his finest!

I saw season 1 but I haven’t caught up with the newer episodes.

Season 3 is a bit too soap-opera-y for my taste.

Yup, for this space geek who remembers watching those Apollo broadcasts in the late 60s and early 70s, I found S1’s alternate reality storyline to be facinating and well done. The speculative mixture of fact and fiction was really compelling. Despite some plot twists and turns and knowing the history of Apollo and Soyuz, S1 ends (IMHO) exactly how it should.

As the series progresses, it has to rely more and more on character stories and backstories, and less on factual events and real people, but I thought they did a good job.

I would highly recommend For All Mankind, especially for those who were facinated with, and knowledgable of, the space program, Apollo, Skylab, ASTP and the shuttle program. And for those who like geopolitical science fiction ala authors like Ben Bova. All that said, SNW was a worthy winner up against some pretty good competition!

Reply
One Lion
Reply to  David1701

I think The Orville was more deserving but happy for them.

In my opinion it was the most deserving to win. Congratulations to all involved in the production of SNW! Looking forward to season 2!

If it were competing against all the other current Trek shows, yeah, I would be with you on that but considering the shows it was up against, I have to say I’m honestly quite puzzled how it came to win. It was not the best Science Fiction show by any means and the writing, while much better than the other current Trek, was still pretty weak. Happy for the team and I did enjoy the show more than the other Trek shows currently but against the competition…it’s merely ‘ok’.

Congratulations to everyone involved in making Strange New Worlds the fabulous show that it is! I love it more than any show since TOS, and I’m completely thrilled that SNW exists.

All of the new Star Trek shows have had wonderful acting, costumes, sets, props, and music; with SNW, they finally also have wonderful writing. And since all of the other stuff is there to bring the story to life, starting with a great STORY makes all the difference.

Thanks, SNW folks. You have my heart.

Look out, the SNW-Disco rivalry is about to go supernova. Any day now, Anthony Rapp will go full Sirtis on SNW. Get your popcorn.

Wasn’t aware there was a rivalry.

Nothing against Mount or his hair but it is almost an outrage that For All Mankind lost to SNW … is something I would say if I had watched For All Mankind. Looks a bit dull? It’s on my maybe perhaps watchlist, though.

I haven’t seen it yet either (or anything of THE EXPANSE past s1 — the show had a look that I found very unappealing and a cast that I didn’t connect with, so the show, despite clearly having good SF genes in it, just gave me no incentive to stick), but can’t help but think it was better than SNW. The latter, while easily the best of the Trek bunch out there, still only had one great show and 2 or 3 good ones, which ain’t that terrific a percentage (well it is compared to DSC and PIC.)

I think I’d have voted for ORVILLE over this too — it had four duds in a row, but then the rest of the season seemed to work pretty well.

While it had its ups and downs, overall I thought “The Expanse” was a terrific and sophisticated hard SF space opera (and, per JMS, the true spiritual successor to “Babylon 5”). Unfortunately, after five successful if uneven seasons, it barely managed to stick the landing, mostly due to Amazon’s short-changing the budget resulting in a truncated final year. Life is, indeed, terrible.

Wow stiff competition indeed. I watched The Expanse and For All Mankind and IMHO both were worthy competition. Still plan to watch NH sometime soon.
All that said, congrats to all the cast and crew of SNW. I really enjoyed the stories and characters from S1 (too bad Hemmer is gone). Can’t wait for S2 to get here!
Btw, awesome TOS t-shirt Mr. Peck!

So glad for this crew, for the production team. Season 1 was great from A to Z. Strange New Worlds did such a great job not only with the casting and writing, but the whole concept right from the start.

So grateful with so many options now. Look forward for Season 2! And getting ready for LW Season Finale and Prodigy Season 1B!
﻿

Mando hasn’t been on for nearly two years? How is that up for consideration?

That’s a very impressive win given the competition!

Can I assume Severance was too late in the year to be nominated? That show is incredible.