As previously reported, on of Paramount’s biggest promotional partners for their new Star Trek movie is Kellogg’s. TrekMovie has sent out a special agent to to get a full report on how the new Star Trek appearing across isles at local markets across the country.

She was trusted by Captain Jean Luc Picard on tactical missions of vital importance, such as helping to save Earth in the past in First Contact. Her name: Ensign Kellogg. TrekMovie has asked Picard for permission to assign Kellogg to her most important task: visiting grocery stores on present day Earth and reporting on what Kellogg’s promotional products she uncovers.

Ensign Kellogg’s Log: Earthdate March 2009
Having been assigned the task of reporting to Star Trek fans about Kellogg’s products, I have been scouring local grocery stores for information. Here is what we know for certain is available, and what Star Trek items are being offered either in the box or for mail-away.

CEREALS
While I am famous for helping Geordi save Earth during our voyage back in time to stop the Borg, the Kellogg’s company is most famous for its cereal. Star Trek is being featured on almost all varieties. Depending on the cereal, there are one of three offers being promoted.

Apple Jacks, Corn Pops, Frosted Mini-wheats, Frosted Flakes, Fruit Loops, and Rice Krispies feature a free Beam Me Up Badge inside specially marked packages. There are five varieties, the main Starfleet divisions of science, command, and engineering, a Klingon badge, and a Romulan badge. Each badge lights up like a small flashlight. Again, the box backs are featuring nice images of the USS Enterprise.  [more info on this offer at Kelloggs.com] 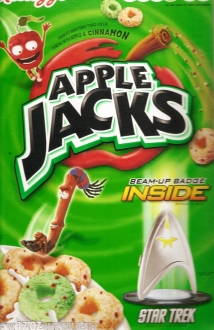 On Frosted Krispies there is an offer for a Star Trek tee shirt designed to look like those from the movie, available . Fans could choose between blue or red, and get the shirt by mailing either 9 tokens and an official order form, or 1 token and $9.99. Keebler Fudge Shoppe Fudge Stripes and Keebler Fudge Sticks Cookies features the same 1GB flash drive offer. There is a new picture of the USS Enterprise orbiting a planet on the back of the Stripes packaging.

WAFFLES
Star Trek is featured on the boxes for a variety of EGGO Waffles. Fans could send in 2 tokens and $3.99 to get a 3D Warp Speed Plate.  [more info on this offer at Kelloggs.com]

POPTARTS
Want to see ST09 for free? Then pick up a family sized PopTart boxes, collect 5 official movie pass vouchers from specially marked packages and mail in for a free ticket. Limitations apply, so be sure to read the details printed inside the box. The PopTart packaging includes a new picture of Uhura. [more info on this offer at Kelloggs.com] MORE TO COME
I have it on good authority from my contacts in Aisle 31 (a grocery store version of Section 31) that there is more to come from Kellogg’s. Don’t be surprised if you see a limited edition Star Trek cereal of its very own. Kellogg out.

Thanks to David for his assistance with this report

well, that was a detailed report, about cereals…

Sadly… non of this is avaible here in Germany ^^

Flash drive looks nice. Wonder what quality the shirts will be?

oh men, are we kids now! Please shoot me…

Beam ups are now Badge controlled? No more “Beam me up, Scotty”?

I know the ultimate point of movie making is money making — but I still wish we could have a Star Trek film without dragging %$#@! Tony the Tiger into it.

I just bought my first box of Froot Loops in 30 years, just to get a “beam up badge”- I got the Klingon one, it’s a tiny LED flashlight that emits a red color when you press down on the Klingon symbol. Pretty cool if you’re a kid, I think.

How ultra geeky I’ll be around the physics department with my official Trek wristband flashdrive!

Wait: do we know if that will fit an ‘adult’ wrist?

ZOE looks so gooooddd….drooling all over my keyboard…

For me, the real question is whether they’ll have some of this stuff on Canadian release cereals. For example, I REALLY want the t-shirt, but we don’t have Frosted Krispies here.

I’m 26 and now more excited about cereal box prizes than I ever was as a child.
Yay!

nice pics of the Big E there…..

My wife bought 5 boxes of Froot Loops & 1 box of Reduced-Sugar Frosted Flakes. I got 4 “Engineering” & 1 “Romulan” badge.
I’ll be eating Froot Loops for a while…

None of this is at my local grocery store yet. I’ve checked. The eggo minis are tasty..

Ugh, did they all have to be cereals I wouldn’t eat on a bet? Apple Jacks? Frosted Flakes?!? Blech. Oh, well…I’ll buy the boxes, dump the cereals in Zip-Loc bags, bring them to work, and they’ll disappear. My coworkers eat ANYTHING.

Oh, and I really like the new US poster. Was wondering when this would finally show up.

Oh, and the cereal boxes have some really nice front images of the big E. Very cool. I don’t see how you can’t like it, but that’s just me.

So far the only cereal I found with the Beam Up Badges is Froot Loops.

All have the Klingon badge…

FYI The Beam Up is the LED light when you press the symbol ie a beam of light.

Seriously, though — the offers here are cool. It’s nice to know these tie-ins do rock.

Why is all the really cool stuff loaded with the things my wife will never let me buy because they’re loaded with extra sugar!!!

I got my Klingon badge this morning before work. Being only 19 I’ve never had this experience! Its EXCITING!

Once again I am really liking all the marketing going along with the movie.

A little off topic, but AMC reaaally needs to stop showing Nemesis. Its a terrible movie and its not even close to being a movie classic. With Paramount trying to promote a new direction for Star Trek, it doesn’t help that AMC keeps repeatedly showing this embarrassment. Now if they showed something like TWOK, that would be a different story. That’s a movie classic.

Plus, I wish sci-fi (or syfy) would start showing TOS again. Enterprise is ok and I enjoy watching some of its better moments, but you can’t forget the classics!

Ya know, one thing I must say from my point of view being such a young Trekkie is that in all my time being in school I was made fun of for liking Star Trek and I would only find one or two other people in school of 4 thousand that enjoyed Star Trek. Now its just so strange yet amazing that all of the people around me and my friends are like STAR TREK IS GONNA BE AMAZING! I HAVE TO SEE IT. I really never thought I would see the day that all of this stuff is happening….

Frosted Krispies sound fairly disgusting, but for a uniform t-shirt, I’ll make the sacrifice. And who knows, maybe they’ll even taste something like those Razzle Dazzle Rice Krispies of yore. Those were my favorite kind. (A curse upon short-lived promotions.)

And are the pictures not loading for anyone else? This one article doesn’t have any pictures at all.

I want one of those flash drive wrist bands! Gimme! (Oh, and I’ll take the cookies, too!)

Mongo eats all these stuffs. Mongo no think shirt come in Mongo size. Mongo use flash drive for important project file. No laugh. Mongo good with computer. Hands kind of big for keyboard.

Is Kellogg’s using corn from Iowa?

I wanted to get one of the shirts, but it doesn’t look like Frosted Krispies are available in my area (they have a locator on the Kellogg’s site).

The badges have NON-REPLACEABLE Batteries, so press on them while ya can till they fade and are dumpster fodder and headed to a landfill near you!
And again, even if you mailed in 5 PopTarts seals in today, the text states it takes 90 days to get your free movie passes…so this will be way past the film’s premiere and on it’s way out in a distant dsicount theater on the outskirts of town or gone entirely!
This promo for sugary cereal is not for those watching their calories, or heavne forbid a diabetic child or adult!

I REALLY hope these come to Canada…

I must have one of the flash drives.

Unrelated: Ick, blue bussards. I remember they were toying with that for ENT but wisely decided to go with tradition.

God, I do feel like a kid again actually wanting some of the cereal stuff. Then again, its improved a lot since the early 90’s. Back then a color changing spoon was awesome, now we get flash drives.

I live near Battle Creek, home of Kellogg’s, and I know some folks who work there. Guess I’d better ramp up those friendships….!

Duct tape not work to fix, by the way.

I must have these T-Shirts.

That means 39,96 + 4 packages of these teeth miners (you may eat them yourself please, I’m just interested in the Shirts :) + shipping the tokens and order form (to kellogs) + shipping the four shirts to germany. ASAP

Who in US would calculate and do this for me?