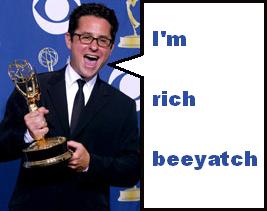 News of the JJ Abrams deal with Paramount and Warner TV hit the wires and the trades on Monday (2 days after your humble blogger brought you the news). For the most part the reports focus on how amazingly rich and powerful Mr. Abrams is about to become, but our favorite topic (Trek XI) is mentioned in almost every report…most like this tidbit in The Hollywood Reporter

Abrams already is attached to direct and produce a revival of the "Star Trek" film franchise for Paramount, which is his first project under the new feature deal.

but Variety (who were first with Trek XI news in April) has a bit more info on how Paramount views the Trek franchise and Abrams place in it:

In addition to helming his first feature for Par, "Mission: Impossible III," Abrams has been put in charge of resuscitating its "Star Trek" franchise by producing and developing an 11th edition. … It’s a very clear strategic move," said Par prexy Gail Berman. "We worked with J.J. through ‘Mission: Impossible III’ and we got to see his abilities in a large movie. We talked about ‘Star Trek’ and turning the biggest franchise in Paramount history for a rebirth; then this was the natural progression."

Even our old friend George Takei (Sulu) got into Abrams buttkissing act…. Over the weekend he (along with Voyager’s Ensign Kim: Garret Wang) sung Abrams praises at a panel at the Toronto Trekker Conference:

Takei: You know the last star Trek series "Enterprise" was not very popular and the last Star Trek movie failed and Paramount had decided they aren’t going to do anymore Star Trek. However there is a big Star Trek fan who also happens to be a very quality director, he directed Mission Impossible III. And he told Paramount “the picture I want to do is a Star Trek movie” and he pitched the idea and sold them on an idea that the Paramount powers-that-be had decided they weren’t going to do anymore

Wang: JJ Abrams, good luck to him. He does the right thing, lets put it that way. It’s truly incredible, it’s a worldwide phenomenon if you think about that. It’s the only show where you can go to any contintenet and they are going to know about it..people know it.

Where George is getting this info I dont know…but it does seem to jibe with other reports that it was Abrams and not Paramount that started the ball rolling on Trek. His last comment about Trek XI was pondering "I wonder what young Sulu was doing"…Give it up George…they are not going to give you a job.

Another interesting quote from Paramount President Gail Berman is this

I guess what she is saying is ‘he can make chick flicks too’. Along with Para Chairman Brad Grey’s comment about Abrams being a ‘tripple threat’ (producer, writer, director) it seems that Paramount thinks Abrams is their new jack of all trades.