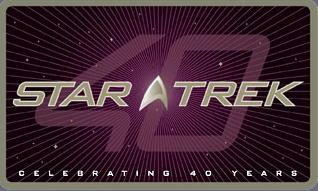 Todays Daily Variety has a 3 page spread on the 40th Anniversery of Star Trek with a number of articles. Most cover the history of the franchise, the fans and fanfilms. They also got Mr Abrams to talk about Trek XI. Abrams starts of by telling Variety that he started off working on Trek at his Bar mitzvah…because none other than Nicholas Meyer was in attendance! He again confirms that he will be working with his usual suspects (Burk, Lindelof, Orci, Kurtzman, etc) and again says that it is too early to talk about plot details and again cant confirm if he will direct. He reveals that Paramount has flooded the team with ‘every published Star Trek work’ including the books…now that must have been a big delivery. The team he says has a variety of levels of Trek fandom, calling himself a ‘big fan’ (but wont go so far as calling himself a ‘Trekker’), Orci ‘has immediate recall of all things Trek’ and Burk seems to be a newbie…giving them as he says ‘all points of view’

Trek XI will be scary and not just for the hardcore
Abrams adeptly addresses the issues of appealing to both the hardcore and the general public.

“we absolutely feel beholden to the fans, but at the same time, we have to recognize that you cant’ go out and make a movie or TV show for a group of people that live and breathe a show”

On his views of Trek and his approach to the film I think he really hits it out of the park:

“Star Trek to me was always about infinite possibility and the incredible imagination that Gene Rodenberry brought to that core of characters. It was a show about purpose, about faith vs. logic, about science vs. emotion, about us vs. them. It was its own world, and yet it was our world”

“Trek was always a favorite when it was a little bit scary, when they would deal with beaming something on the ship that was an incredible mystery or there was a clear threat. All of these things I loved about the series is what we’re working to incorporate into the story for the movie”

Sounds pretty good…and does that sound like (the often panned) ‘Academy Movie’? NO. Again everything you hear from Abrams makes it clear…the Trek franchise is back and in good hands.

Wow. I’m First. Sorry it took over 5 years to get this first post in.
Abrams has done a great Job with Trek. Bob Orci is so kool to come onto Trek Movie and blog with us.
Wow. Still hard to believe this thred has sat here for over 5 years with not a single post.

I can’t remember when I first posted on this site. Wish there was a search feature …