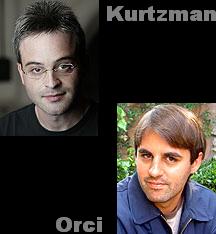 Seems like Abrams isnt the only STXI writer cutting deals. Variety (via DarkHorizons.com) is reporting that Trek XI co-writers Alex Kurtzman and Robert Orci will be producing a big screen adaptation of the Thomas Perry Novel "Nightlife" about a female serial killer. This is in addition to their work as writers on next summer’s blockbuster in waiting Transfomers…and of course the script they are presently writing the first draft of…Star Trek XI. It seems that Paramount/DreamWorks cant get enough of these guys..who appear to be joined at the hip (they are actually best friends who started a writing partnership back in high school). Although best known for their writing, they have signed on Ehren Kruger (Brothers Grim) to do the adaptation of Nightlife.